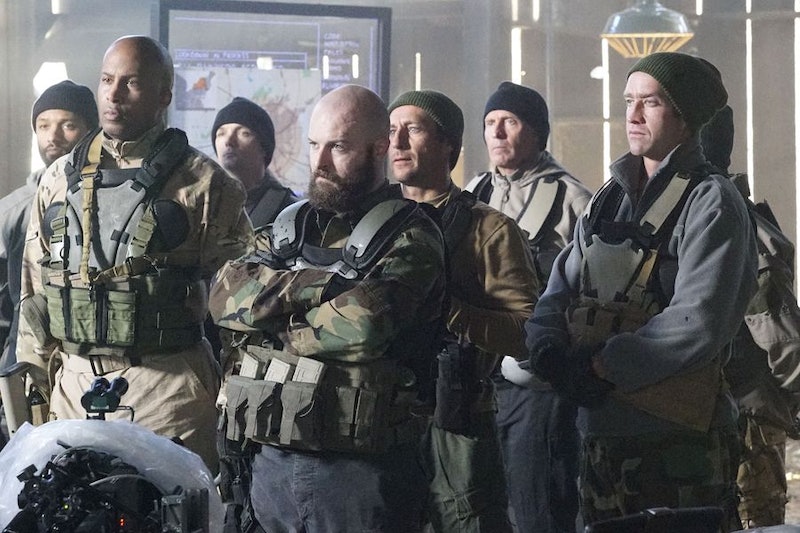 When villains get together in groups, they really love to give themselves a badass name, don't they? It's like they can't help themselves. The Walking Dead has had the Claimers, the Wolves, and the Saviors. James Bond has QUANTUM and SPECTRE. There's the Death Eaters, the Umbrella Corporation, the Empire, and Cobra. And in the Marvel Cinematic Universe we've encountered the Ten Rings (Iron Man), the Hand (Daredevil), and — of course — the granddaddy of them all: Hydra. Now we've got one more evil organization to throw into the mix thanks to this week's episode of Agents Of S.H.I.E.L.D. , and they're calling themselves the Watchdogs. But who are S.H.I.E.L.D. 's Watchdogs, and what do they want?

Audiences for the ABC superhero drama first heard the term last week during the brief promo for the upcoming episode — which is titled "Watchdogs," appropriately enough. "We are the Watchdogs," intones a figure in a creepy mask. "And you will obey." The cool promo voiceover guy then goes on to explain that the Watchdogs are a terrorist cell who are specifically targeting the recent rash of newly-turned Inhumans. Although Daisy and Mack can't seem to agree on how to handle the Watchdogs, everybody seems to at least be certain that they're a credible threat. Heck, at one point an entire building blows up, reminiscent of the explosion in the trailer for Captain America: Civil War that kicks off the whole conflict of that next chapter in the M.C.U.

Fortunately, we can glean a little bit more about the group and its motives before their eponymous episode has even aired, given the fact that they're based on a group ripped straight from the pages of Marvel Comics. There, the Watchdogs were first introduced in a 1987 issue of Captain America; an extremist right-wing terrorist organization led by a man code-named "Top Dog," they fought violently against anything they thought to be immoral or anti-American: pornography, homosexuality, abortion clinics, etc. While it doesn't seem like S.H.I.E.L.D.'s version of the Watchdogs will be quite this political in nature, they probably still view Inhumans as a threat against their traditional American way of life.

So why is the show suddenly introducing this seemingly disconnected storyline, giving the Secret Warriors a random new adversary after spending so much time building up the menace posed by Ward/Hive and Hydra? Well, the Watchdogs' comics history might hold the answer to that question: basically, they are neither disconnected nor random. On the page, it's eventually revealed that, unbeknownst to any of the Watchdogs other than Top Dog, the organization was actually being funded by Captain America's nemesis Red Skull, the former head of Hydra.

While it's unlikely that Captain America: The First Avenger villain Hugo Weaving will be pulling a surprise cameo in this week's episode, it is likely that the show's version of the Watchdogs could still turn out to be operating under the guidance of a head of Hydra — just not the long-dead Red Skull. Secretly funding an extremist terrorist organization seems just like the kind of thing that slimy Gideon Malick would do, isn't it? He probably set the whole thing up between rounds of skeet with his equally slimy daughter Stephanie.

In short, don't be surprised if this week's episode starts off in the wake of Bobbi and Hunter's sudden departure from the team feeling like a palate-cleansing one-off, monster-of-the-week episode… only for it to be revealed late in the game that the whole Watchdogs plot is actually connected to the show's overarching S.H.I.E.L.D. vs. Hydra storyline. After last week's emotionally traumatizing twist, it's nice to be able to see at least one twist coming this time around. Unless the writers have an even worse surprise planned for us, of course… *Gulp!*