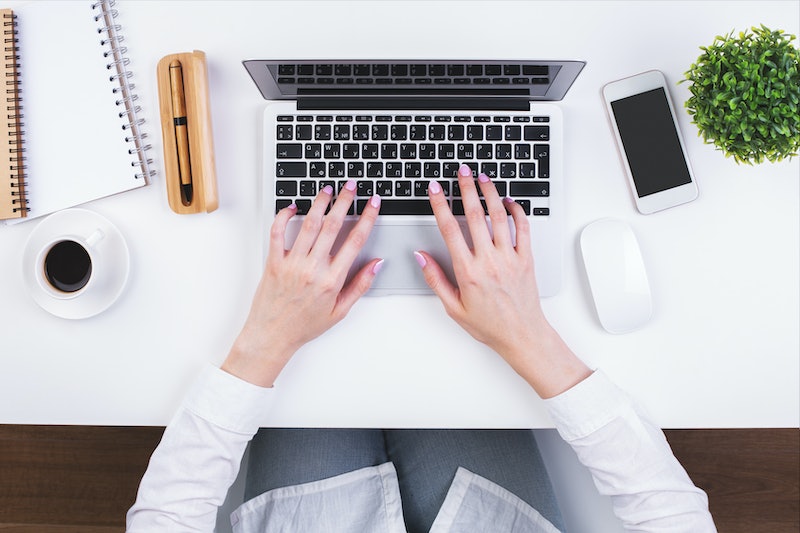 Today, women are making strides toward gender equality just by working in the tech industry, since they're disproving the stereotype that women lack technical skills. But while they prove that women can be kickass coders, some women coders are also advancing gender equality in other ways. Whether they're creating apps that help women or using their public presence to smash stereotypes about women in the tech industry, these coders are moving social justice forward along with technology.

If you've had the experience of being a woman in the tech industry, it's hard not to notice and care about sexism and other forms of oppression. The field is still extremely dominated by white men, and Silicon Valley's culture tends to favor them. According to a American Association of University Women study, only 26 percent of computing and mathematical jobs in the United States are held by women. And according to a survey called Elephant in the Valley, which was conducted by two women who have worked in Silicon Valley, 60 percent of women in tech have been sexually harassed at work, and 84 percent have been told they're too aggressive.

Here are some women who have not only risen above these challenges but also lifted other women up with them.

According to a recent interview with SheRights, Sinders, a UX/UI designer and coder, is creating tools to add to social media platforms that will help users interact with one another in a more civil, safe manner. “We’ve built Twitter somewhat incorrectly,” she told the site. “We’ve built it, effectively without seat belts, without more nuanced degrees of safety." She's currently researching the best ways to change that. Oh, and she's also created a game about a badass female Soviet fighter pilot during World War II.

Wenger started the #ILookLikeAnEngineer social media campaign to show that you don't have to be male, white, or anything other than a human in order to be an engineer. After people sexualized a photo of her in an ad campaign for her company OneLogin, she wrote a Medium post criticizing sexism in the tech industry and calling on others to share photos of themselves and announce that they, too, look like an engineer. According to the Medium post, she's also spearheading ilooklikeanengineer.com, a website for people to share stories related to diversity in tech.

Lampkin had been coding since she was 13, had worked in a technical role at Microsoft, and had an engineering degree from Stanford and an MBA from MIT when she applied for a data analytics job at another tech company. Yet she says she was still told she'd be better for a marketing position — which she suspected had to do with the fact that she's a woman of color. So, earlier this month, she launched the app Blendoor, which matches women and people of color with jobs based solely on their resumes, without recruiters seeing their gender or race until the interview.

Carr grew up witnessing domestic violence in her family and community, and later in life, she volunteered at a domestic violence center and worked as a life coach for women. But she wanted to do more to help domestic abuse victims. So, in her 40s, she taught herself to code and created the app Purple Evolution, which helps victims find shelters, legal services, and other resources in Georgia and is soon to launch nationally. Also the director of Women Who Code in Atlanta, Carr has overcome the disadvantages she dealt with as a 50-something black woman in the tech industry and is helping others do the same.

Coligado, a computer science student at Stanford and a software engineer at Apple, started the Medium site Women of Silicon Valley to challenge stereotypes about people working in tech. As a student in an STEM field, she has faced doubts that she could be as good as her male peers, sleazy pickup lines in academic settings, and trivialization of accomplishments like interning for Facebook. Her site, which operates much like Humans of New York, highlights the accomplishments of women in the tech industry, now both within and outside Silicon Valley.

Pham, founder and CEO of the women's site MOGUL, founded her company in the footsteps of her grandmother, who ran newspapers across Asia. In order to gain credibility with investors, she taught herself to code and built the platform herself before even fundraising. Now, MOGUL gives women worldwide a platform to engage in discussions, share articles, find jobs, sell products, and take classes, all with the goal of being "moguls" in their fields.