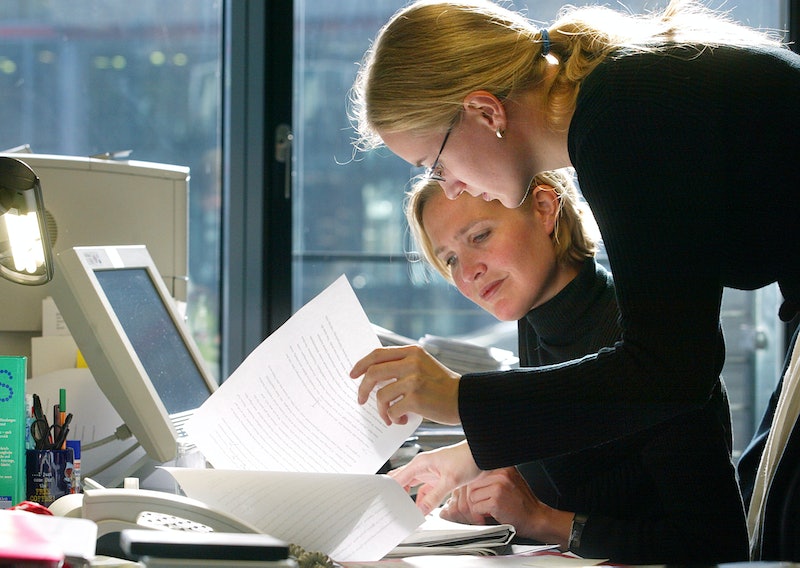 From the outrage women in technology have expressed through the #tableflip2015 movement to the inadequate sexual harassment policies Ellen Pao exposed in the venture capital world, it seems like sexism has become part of the air women breathe in Silicon Valley. Yet women are also playing pivotal roles in shaping the tech industry — which Stanford computer science student Lea Coligado set out to recognize with her Medium site Women of Silicon Valley. Following the format of the site Humans of New York, Women of Silicon Valley profiles women working in technology, asking them about how they've handled discrimination and what makes their field worthwhile regardless.

Silicon Valley technically consists of the southern portion of California's Bay Area but often also includes San Francisco, which was proposed as its capital when a VC investor proposed to make Silicon Valley its own state. But as the HBO series Silicon Valley reflects (and hilariously critiques), the place is less a geographical region than a cultural phenomenon: “brogrammers" in startup logo T-shirts, offices with beer on tap, Meetups for users of different open-source technologies every night, etc. Oh, and it is very white, rich, and male.

Did I mention very male? Tracy Chou, a Pinterest software engineer, maintains a spreadsheet of demographics submitted by employees at largely Silicon Valley-based tech companies, and the average proportion of women engineers is 15.54 percent.

"Silicon Valley is an amazing place to live and work, but there’s no denying it’s still a very male-dominated field," Marie Williams, the founder of a boutique PR firm in San Francisco that caters to developer-focused and consumer tech startups, told Bustle. "It’s inspiring to be reminded that there are so many talented women making waves in the space. I feel like their success is my success, too!"Here are some kickass "Women of Silicon Valley" whose success we could all stand to share in.

In Emoungu's page on Women of Silicon Valley, she reveals that she has "experienced sexism to the point of absurdity," with male colleagues ignoring her solutions then asking her for help in secret, and warns other women not to let pressure to cater to higher-ups hinder their original thinking.

The Italia Innovation Program is a summer program for students and professors to improve the "Made in Italy" business sectors in collaboration with executives from top Italian companies. Carlotta Borruto, its Executive Director, advises other women in entrepreneurship that “the most powerful element for long-lasting success is an outstanding, supportive team."

iXperience, a coding academy in Cape Town where Gillis serves as Chief Operating Officer, only saw a handful of girls during its first session. Gillis was afraid "they were scared to speak up when they were struggling because they did not want to be judged by the rest of the class," who might view them as representative of all women. In response, she strove to foster "an atmosphere of open learning, where the students who are doing well help their peers who are struggling," regardless of gender.

In Chu's Women of Silicon Valley page, she tells an all-too-common story of being mistaken for an employee in human resources or another role often passed off as “pink collar." She wants women pursuing technology careers to know they "don’t have to put up with an unsupportive workplace." With Polyvore's 66% women management team, Chu has found an environment she thinks all women should hold out for, where coworkers "will value you for your ideas, regardless of gender."

As my own nominee not currently featured on the site, Neha Sampat has learned along her path to becoming CEO of built.io, which provides cloud and digital solutions to Fortune 500 companies, to overcome a common hesitation women have about negotiation. "In my experience, women tend to struggle with failure and rejection," she told Bustle. But "I’m a strong believer that if you’re not failing or being rejected from time to time, then you’re not aiming high enough." Sampat notes that while efforts to help women rise in technology professions are to be commended, it's important to remember that "women don’t need special treatment. We just need to be on a level playing field."

The site's editor wasn't going to feature herself, so I'll do it for her. One day at Stanford, Coligado and a male friend were telling another student about a summer they both spent interning for Facebook, and he had vastly different reactions to each. When her male friend talked about his internship, the response was, "You must be really smart!" But when she said the same thing, the other student replied, “Oh… well then I should have applied for that internship.” This experience ignited a fire in Coligado to change the perception that if a woman could accomplish something in her field, anyone could. Subsequent years of being told “girls don’t code because they’re, you know, artsier” and receiving pickup lines from male coworkers fanned her flames.

But over the years, women succeeding in technology helped Coligado realize that "at the end of a long, crappy tunnel fraught with temptations to question my intelligence and terrible pickup lines, there is a light." She decided to provide these role models to other women, and the rest is history. So, what's next for Women of Silicon Valley? It looks like they're expanding their efforts well beyond the Valley — a goal Sampat also endorsed, since "these are global challenges and there’s a huge opportunity to learn from what’s working across cultures." In this video, Coligado appears with Borruto in Venice, calling on viewers to nominate European women for their features.

Women in tech and those who know them, regardless of location, can submit to womenofsiliconvalley at gmail dot com to nominate someone for the site — because one simple step toward gaining women widespread recognition is women acknowledging one another and themselves.

More like this
The 3 Dating Apps Queer Women & Nonbinary Folks Actually Like
By Emma Carey
15 Years Of The iPhone, In Pictures
By Emma Carey
How to Delete (or Pause) Your Hinge Account
By Emma Carey
How To Protect Your Digital Privacy If You Need An Abortion Post-Roe
By Kaitlyn Wylde
Get Even More From Bustle — Sign Up For The Newsletter