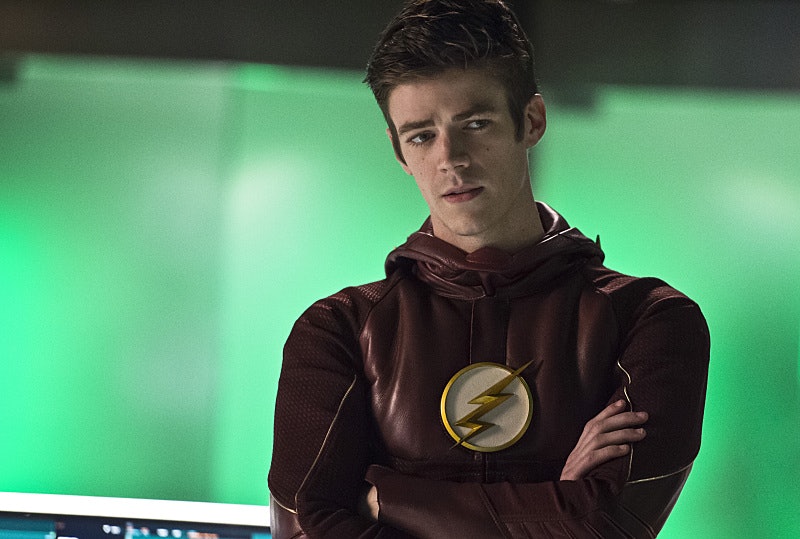 In the wake of Ezra Miller's debut as the Flash in Batman v Superman: Dawn of Justice , a lot of people have been wondering why Grant Gustin, star of The CW's The Flash, isn't playing the role on the big screen. Though the DC Cinematic Universe and Television Universe were never really connected, the Flash's appearance in BvS appears to have obliterated any chances for the two to exist in one joined universe. So, it looks like Gustin is just one of the many actors starring in a DC television series (The Flash, Arrow, Legends of Tomorrow, Gotham, Supergirl) who won't be a part of the DC stories on the big screen. Fans who have grown to love the actor's take on Barry Allen were naturally upset when they found out he wouldn't be given the chance to play the character in the DC movies. And, they're right — Gustin would have made a great Flash in the movies.

That's not to say that Miller won't do a fine job in the role. After all, anybody who's seen The Perks of Being A Wallflower knows that he's a damn good actor. Still, after almost two seasons with Gustin as the Flash, it's hard to imagine anyone else in the part. And there's no doubt that, contrary to BvS director Zack Snyder's belief, the tone of Gustin's take on the hero would have worked just fine in the DC Cinematic Universe.

I get that Snyder wants to keep the DC Cinematic Universe all doom and gloom, but not every superhero needs to have a permanent scowl on their face. Gustin's Flash is 100% adorable, nerdy and awkward. And that's what makes him so lovable — you want to root for him as a superhero and as a person. If Snyder's not going to give us an awkward Clark Kent, we might as well have some fun with Barry Allen.

Gustin actually made his Barry Allen debut on another CW television show, Arrow, and has continued to make crossover appearances on the show ever since. Together, Arrow and The Flash have also joined forces to launch the CW's Legends of Tomorrow. We already know that Gustin's Flash can share the screen with other superheroes, and he can fight with them in an entertaining way. Most recently, Gustin appeared on CBS' Supergirl in a charming crossover, proving he could keep up with Superman if given the chance.

3. Gustin Is A Good Actor

Look, I love The CW, and I have always loved it, but when the general public thinks of the network, they don't generally think of it as a network with groundbreaking acting. And yet, over the years The CW has consistently proven itself experts in casting young talent, some of whom have gone on to win Golden Globes. As the Flash, Gustin not only shows that he can act, but that he is also strong enough to cary an entire show. That's no easy feat.

It would be interesting to see how a Flash that already has an established relationship with the police force in his city could fit into the world of BvS, where superheroes are both revered and feared. Having a hero that works within the law, as opposed to against it (sorry, Batman) would add a new perspective to the DC film world.

Superficial? Yes. But, please, this is Hollywood we're talking about, and Gustin is undeniably attractive. If DC was looking for a way to bring in a younger demographic, you really can't do better than this guy, unless they were considering casting every member of One Direction.

So, I know that this is part of the Flash's origin in the original comic books, but on The Flash, Barry Allen's daddy issues have already played a huge part. If Gustin's Flash were to join the DC Cinematic Universe, there wouldn't be a need to establish his sad past through the use of inexplicably slow-motion flashbacks (à la Batman). He could just fit right in with Batman and Superman without missing a beat.

For those of you who don't know, before he was the fastest man alive, Gustin appeared on Glee, so the man can carry a tune. I know that there is no way any of the DC movies will feature musical numbers, but just imagine the possibilities! Having a Flash that can sing in a pinch might just come in handy one day.

8. He Actually Enjoys Being The Flash

One thing that's super refreshing about Gustin's Flash is that he actually loves being a superhero. He loves having super speed, he loves saving people, and he likes to do it all with a smile on his face. Sure, every now and again there's a bump in the road, but he doesn't feel the same burden as Batman and Superman, which might spice things up in the Justice League.

A superhero who respects women. How novel.

Let's be real here: Grant Gustin already has a built in fanbase as the Flash. There's no reason why that fandom wouldn't follow him to the movie theaters.

In case the first 10 reasons didn't sway you, this one should. Grant Gustin is a great Flash on television, and he would have been great in the movies too.

At the end of the day, maybe it's for the best that Gustin wasn't cast as the Flash in the DC Cinematic Universe. Let the filmmakers do what they want, and if they screw up, fans will still have Gustin in The Flash.