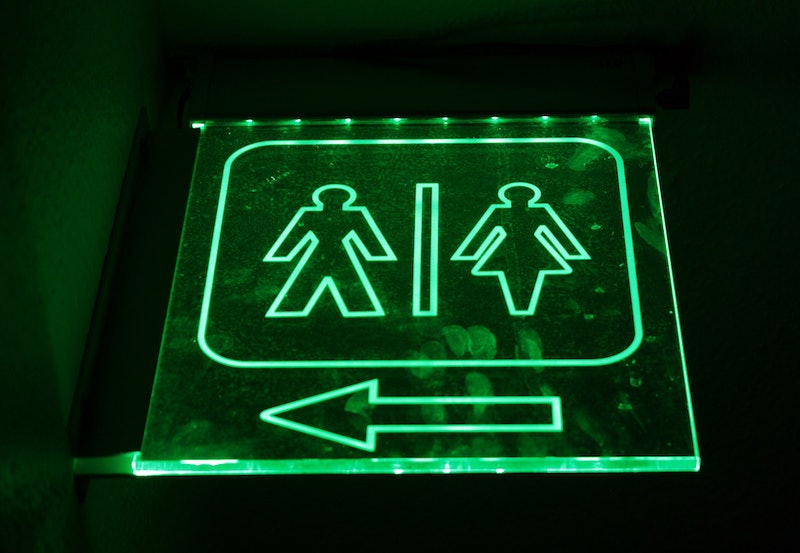 A recent bill in North Carolina has endangered transgender people's ability to use public restrooms — but one store a few states away in Georgia is letting its customers know this will never be an issue for them. An LGBTQ-inclusive bathroom sign at a Kroger grocery store announces that anybody of any gender is welcome to use the facility, and this country could use more bathrooms like it.

North Carolina's House Bill 2, passed on Wednesday, March 23, prohibits the use of public restrooms that don't match the sex on a person's birth certificate. Since its passage, local and national businesses have been voicing their disapproval. Several have even been incorporated into a map of the state that shows where trans people can use the bathroom safely.

No other state has passed such a law as of now, but even when people can use the rooms of their choice, gender-segregated bathrooms can make trans people uncomfortable by opening up the possibility that someone will assume they're in the "wrong" bathroom and harass them for being there. Plus, non-binary people may not feel like they belong in the men's room or the ladies' room. That's why unisex bathrooms like Kroger's are helpful. And, as the sign points out, LGBTQ people are just one group that benefits from gender-neutral bathrooms. Parents with kids and people taking care of those with disabilities may also be limited by bathrooms that only allow people of one gender.

Georgia is also in the process of considering a law that diminishes LGBT rights. House Bill 757 would ensure that religious officials and businesses aren't required to assist same-sex weddings. The state legislature passed this bill on March 16, but Georgia's governor Nathan Deal has said he'll veto it, announcing at a press conference, “I do not think we have to discriminate against anyone to protect the faith-based community in Georgia.”

A Kroger representative tells Bustle over email that the sign was posted in January, not in response to North Carolina's or Georgia's legislation but simply as a general gesture of inclusion. “Kroger stores with unisex bathrooms are designed to serve our customers in all the ways stated on that sign: parents with young children, parents with disabled children, adults with aging parents, the LGBTQ community, and for any other reason such an accommodation might be more convenient," the representative said. "We are proud to serve each and every customer that walks in our doors.”