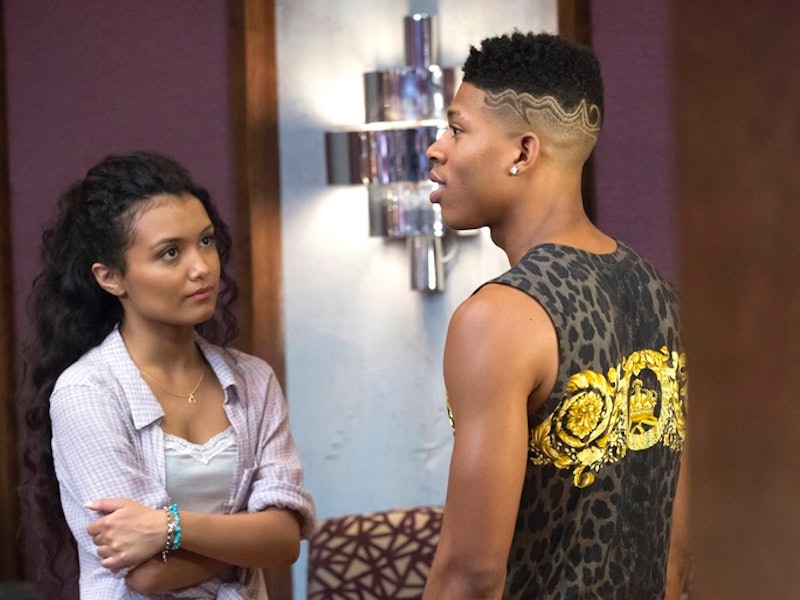 After far too long of a break, Empire finally returns to FOX Wednesday for the remainder of Season 2. The midseason finale left fans with so many questions, like what the fate of Rhonda and her baby will be and what will happen now that Hakeem handed Empire over to Camilla, among many others. As important as all of that may be, let's discuss something else I know most fans are dying to know about: Hakeem and Laura. What's ahead for these two lovebirds? While chatting with Bustle, Jamila Velazquez teases what's to come in Laura and Hakeem's relationship, which apparently will soon encounter both the good and the bad.

"Definitely expect for things to get more serious between Hakeem and Laura," Velazquez says about her character and Hakeem (Bryshere Gray) in future Season 2 episodes. Ever since Hakeem discovered Laura and vowed to make her a star, they've faced many obstacles and will surely face many more, especially with Hakeem's ex Camilla (Naomi Campbell) returning and Anika (Grace Gealey) carrying Hakeem's child. So to hear that they will be getting more serious, may surprise some fans.

However, don't expect everything to be perfect between them. "There definitely is [trouble ahead]," the 20-year-old actor says about the couple. She remains tight-lipped and doesn't offer any more details about the kind of trouble that will come between Hakeem and Laura, because as Velazquez explains, "I can't say too much."

That said, she does note that Camilla and Laura will not become best friends anytime soon. After being asked if viewers will see tension between the two, she says laughing, "Oh, yes. Definitely." Although, the same can't be said for Velazquez and Campbell, who she describes as one of the friendliest individuals. "She was such a sweetheart," Velazquez says about the two filming together. "I mean, I was kind of nervous, because I didn't know to what to expect. It's Naomi Campbell. She was super sweet and she introduced herself to me and it was really nice. It was a fun shoot."

Camilla and Laura's scene is one Empire fans won't want to miss, in addition to when Laura finds out about Anika's pregnancy. "I can't wait for [viewers] to see that," Velazquez says about Laura's reaction. "It's just drama — drama, drama."

When Laura isn't dealing with Hakeem's past romantic partners, she will be busy with her music career. "I think it looks pretty positive," she says about Laura's future in the music industry. As for whether or not Laura will stay at Lyon Dynasty or head on over to Empire, Velazquez admits it's complicated: "She definitely will be staying with Hakeem and Dynasty for a bit, but it's also a bit confusing. So much is going to happen, it's kind of hard to explain."

Does all of this mean Laura supports Hakeem's decision in dethroning his father, Lucious, at Empire? That's also a bit complicated. She says, "I think she supports him, but at the same time I don't think she is really aware of everything that's going on. I also don't think she completely understands it 100 percent." If Laura were to learn more details about the situation and the Lyon family, how would she react? "I think she would obviously support him because she cares about, but I also think she would find it weird that he betrayed his family so easily because of another woman who isn't even part of their family."

She also says that Laura is going to come into her own throughout all of this. "You're definitely going to see her grow. You're going to see other sides of her personality and just see how she reacts with the obstacles she faces in her relationship."

As for Velazquez, if she were Laura, she just might run in the other direction. "I definitely think in a lot of ways she's just too good for him and his family, in general," she confesses. "She doesn't come from the kind of family that he comes from. Her family is definitely much more normal in a lot of ways and not as dysfunctional."

Overall, it seems like Laura still has Hakeem's back when Empire returns, but who knows how long that will last. As much as I adore Hakeem and Laura, here's hoping her career doesn't get ruined in the process, because she deserves to make her singing dream come true.