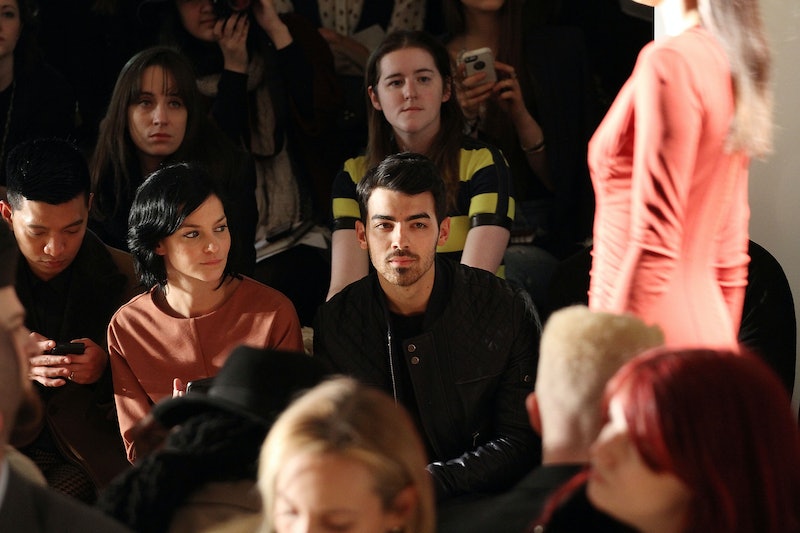 Wait, Joe Jonas? Yes, Joe Jonas. The middle Jonas brother has been a veritable staple at this year’s runway shows, and he has a reason: He’s covering NYFW for New York Magazine ’s fashion site The Cut.

We won’t argue that it seems like a weird fit. Many sites choose a dedicated fashion figure to cover the semi-annual event — Gwyneth Paltrow's Goop, for instance, asked former Moda Operandi creative director Taylor Tomasi Hill to cover this fashion week for that site. However, Jonas is taking his new correspondent job seriously, hitting up show after show and reporting back to The Cut’s readers about his life at NYFW and thoughts on the collections. (If you can recall, this isn’t the first time Jonas has put his pen to paper for the magazine: He was responsible for that juicy tell-all that spilled his secret weed-smoking with Miley Cyrus and Demi Lovato, among other things. We’re guessing the magazine is hoping his fashion week pieces may be just as revealing and traffic-driving.)

In his role as a NYFW reporter, Jonas has attended everything from the Richard Chai and Duckie Brown shows (the former of which produced outfits Jonas says he'd like to wear onstage) to Opening Ceremony and Lacoste (which “destroyed,” according to his Instagram photo of the show). And even better than his musings on collections and the Fashion Week crowd — including the observation that it seems many “people don’t enjoy going to shows anymore” — are all of the admittedly great outfits he’s been spotted in on the front row.

From a sharp baby-blue suit at the Lacoste show on Saturday and a casual Knicks bomber jacket at Sunday night’s Opening Ceremony show to an amazing quilted coat at Costello Tagliapietra, Richard Chai, and Ducky Brown, Jonas has looked better over the past few days than he has in his entire career as a Jonas Brother.

At this rate — especially if his style keeps evolving and he continues to cover fashion for The Cut or any other site — we could easily see Jonas becoming a trusted eye and muse in the world of men’s style. And given his start as a shaggy-haired boy with a love for bad vests, who could have seen that coming?

RELATED ON BUSTLE: Some of the Best Stuff Coming Out of NYFW

More like this
Behold: The Wildest Fashion Moments of 2022
By Dominique Norman
Twitter Can’t Get Enough Of Lewis Capaldi Creating Fashion Looks For ASOS
By El Hunt
Here Are All 703 Outfits Rachel Wore On Friends
By Kat George
10 Holiday Fashion Picks Our Senior Editor Can't Stop Wearing
By Kelsey Stiegman
Get Even More From Bustle — Sign Up For The Newsletter