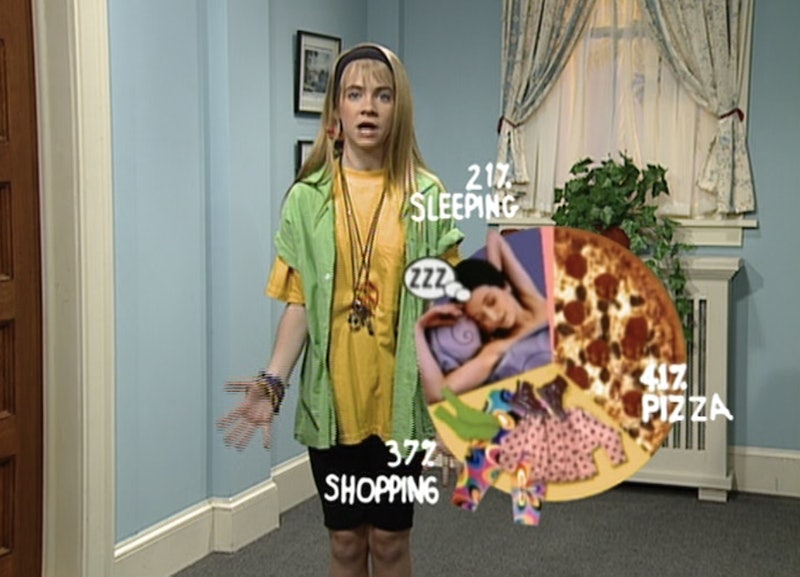 If you hate good news, happiness, unicorns, rainbows, and positive energy flowing through the universe, look away now: in a recent interview, the revelation that Melissa Joan Hart is in talks to reboot Sabrina The Teenage Witch and Clarissa Explains It All set the Internet ablaze. After the studio audience at FABlife exploded into mass cheering, Hart signalled we should all just take some deep breaths and simmer down a little, please: "They’re throwing around Clarissa and Sabrina ideas. It depends on who’s gonna give up rights, who’s gonna do it, how’s it going to be done. It’s a lot of politics and we are nowhere near doing anything."

And, while I'm trying to stay totally zen, chill and not at all bothered about possible iconic 90s Melissa Joan Hart show reboots, she's making it particularly tricky for us, having spoken earlier in the month about the possibility of her 90s shows being revived. "I might," she told the Huffington Post. "There's a lot of talk about it. I feel like almost every day, somebody's calling me about it. Would we do it? Should we do it? How do we do it?... I think the thing about reboots is they're really hard to do. They're hard to do right. I think sometimes it's better to just leave it in the past, unless you do it really, really great."

Still. Given the wave of nostalgia TV being made at the moment (Gilmore Girls, Twin Peaks, The X-Files, Full House, I'm lookin' at you), I'd be surprised if two of the '90s' most well-loved shows didn't make a much sought-after reappearance on the small screen. But, although Hart's acting skills are pretty magical, there's only one of her. Which raises the question: which of her shows is a better fit for 2016? Clarissa Explains It All, obviously.

Is that Sam, Clarissa's adorable neighbour/best friend/future husband, or the guy who does that awkward standing-by-the-sliding-doors greeting role at your local Urban Outfitters? The fact that you, me, and everyone we know cannot answer the above question leads me to conclude that either Clarissa Explains It All's look is so 2016... or 2016's look is so 1991. Whatever, shut up logic, tie dye rules.

2. Clarissa Is An Amazing Feminist

Clarissa Darling was TV's original badass feminist. 2016 is the year the U.S. could get their first ever female president. What better time is there for a show that's all about empowerment and crushing the patriarchy? Sure, Sabrina was also a pretty sassy lady, but she spent way too much time scheming to take down Libby and catfighting with her over Harvey to be quite Clarissa's equal when it came to the Sisterhood.

3. Clarissa Is Perfect For Startup Culture

I don't know about you guys, but Clarissa was the first lady I saw on TV who was genuinely engaged in tech and used programming in creative ways. Remember how she used to design her own computer games to therapeutically work through her issues on a completely basic Windows type computer? I feel like if she could do that in 1991, then 2016 Sabrina would be the queen of Silicon Valley.

4. You Guys, There's A Book Now And Everything

At the end of last year, Clarissa Explains It All creator Mitchell Kriegman published a kind of literary reboot of the series. Things I Can't Explain follows the 20-something Clarissa Darling during her trials and tribulations as a confused millennial in NYC (so sue me, maybe she doesn't end up in Silicon Valley: but she should). So look: Kriegman's already in a totally Clarissa state of mind and has been chewing over what adult life for everyone's favourite teen programmer would be like. What better timing could there be for him to start penning a new series?

While there'll always and forever be a special place in my heart for everyone's favourite teen witch, facts are facts: Clarissa Explains It All is just a better pick for 2016. Better luck next year, Sabrina.

More like this
9 Honestly Unbelievable Revelations From The WAGatha Christie Trial
By Frances Stewart
10 Eurovision Moments That Celebrate The Weird & Wonderful Camp Extravaganza
By Sam Ramsden
Who Are The 6 Illuminati Heroes in 'Doctor Strange 2'?
By Grace Wehniainen
20 Photos From The 'Stranger Things' Season 4 Premiere To Make You Feel Old
By Alyssa Lapid
Get Even More From Bustle — Sign Up For The Newsletter