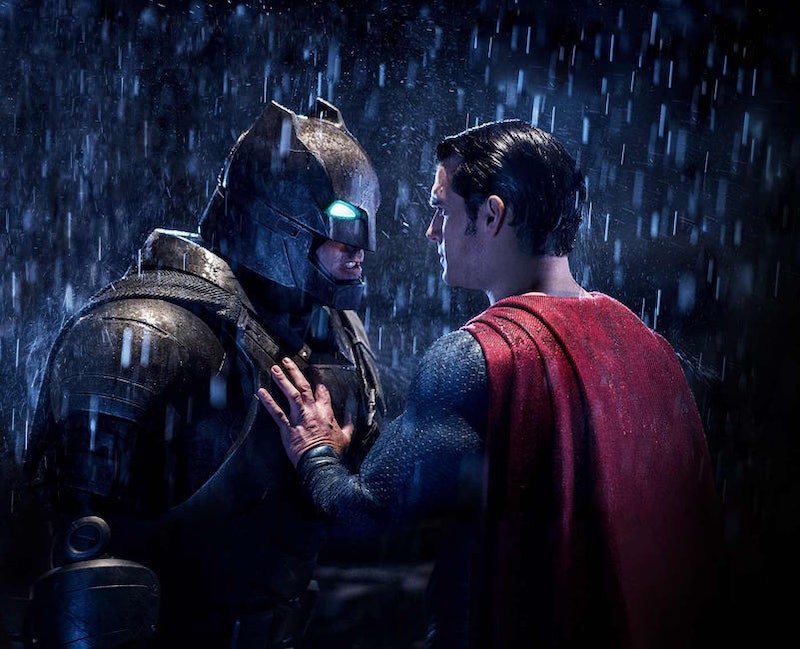 If there's one thing every superhero movie has too much of, it's men. (Seriously, how much testosterone is needed to save the world from evil?) But Easter Eggs come in at a close second, and Batman v Superman: Dawn of Justice is no exception. There are so many DC universe Easter Eggs in BvS that it would be near impossible to catch them all. Some are obvious, like the footage of Cyborg taken from STAR Labs; others are obscure to say the least, like "Phantasm." And while the more obvious Easter Eggs in Batman v Superman have been thoroughly dissected, especially as they pertain to future DC movies, others have yet to be explained. In fact, there are a few crucial DC references you missed in Batman v Superman that could provide major hints as to what lies ahead.

It's no secret that (spoiler alert) Superman is not totally dead at the end of Batman v Superman . Even if you're not familiar with the comic book story arc of The Death of Superman, in which he eventually regenerates, director Zack Snyder hinted at Superman's eventual revival with the final shot of dirt vibrating on top of Clark Kent's casket. What is a secret is how exactly Superman will return, and this is where one small DC Easter Egg comes in. In the film, Superman receives two funerals, one for Clark Kent in Kansas and one for Superman in Washington DC. Fans of the original comics might have recognized Superman's coffin, specifically the black and silver color scheme.

Contrary to what one might thing, Superman's coffin isn't black and silver because it is a Kim Kardashian West-approved color combo. The colors are actually an allusion to the black and silver costume Superman wears after he recovers from having been "killed" by Doomsday. This allusion to the DC comics might just be an acknowledgement of the source material, but it could also hint as to how Snyder and the filmmakers plan on bringing Superman back from the dead.

In the comics, Superman is "dead" for months, during which time four other men take up the "Superman" mantle, each with varying degrees of success. When Superman finally returned, it was revealed that he had been slowly recovering in the Fortress of Solitude using the same Resurrection Matrix used by Lex to create doomsday in BvS. When he finally emerges from his cocoon coma, the Krytponian technology also gives him a new Superman suit, this one in black and silver. By putting a coffin with those colors in BvS, perhaps filmmakers are hinting that this is also how Superman will be revived in the DC Cinematic Universe.

Of course, there are a few plot holes that will need fixing for this to work out. Most importantly, someone would have to have the foresight to transport Superman's body to the Fortress of Solitude. This doesn't seem likely given the fact that he's being buried in Kansas and the only superheroes we know of (Batman and Wonder Woman) believe him to be fully dead. If you're thinking that his body might already be there and viewers are just meant to think Superman is in that wooden coffin, you might be right. Of course, that would make the vibrating dirt one hell of a misdirect, but sillier things have happened in superhero movies.

Even if Superman's resurrection doesn't have anything to do with the Fortress of Solitude, there's still a good chance the black and silver color scheme could make an appearance. In 2013, concept art appeared to show Superman wearing a black and silver costume. And, though that costume never appeared in Man of Steel, maybe we'll see it somewhere down the road.