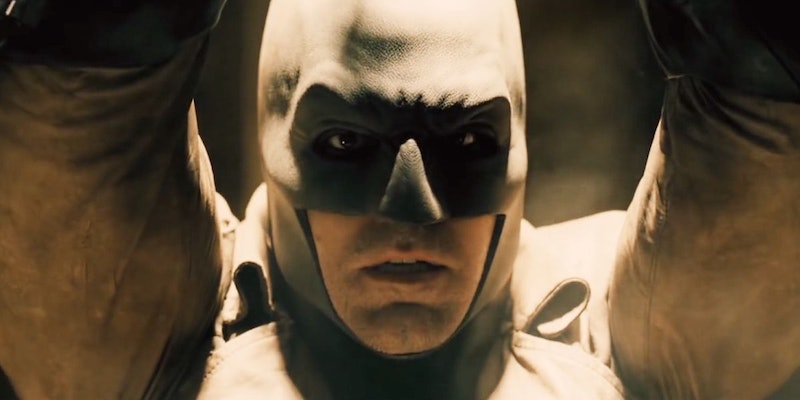 Batman v Superman: Dawn of Justice may have bombed with critics, but the movie absolutely cleaned up at the box office on its opening weekend to the tune of $424 million worldwide. That's a lot of money, which means that a ton of people saw this insane movie over Easter weekend. And I can guarantee that all of them are wondering what was going on during the Batman nightmare sequence in Batman v Superman . Because even though the movie is nonstop crazy from start to finish, Batman's bonkers dream takes the cake for most confusing part of the whole film. So what was going on in that scene?

I'll do my best to explain what happens in the sequence. Bruce Wayne is hanging out in his Batcave looking at some computer files that he stole from Lex Luthor. He steals the files because he wants to find out where he can get some Kryptonite so he can use it to kill Superman. What he isn't expecting though, are a bunch of files related to other superpowered individuals. There are files on Wonder Woman, the Flash, Cyborg, and Aquaman — though the latter three aren't unveiled until later in the film. Then, while he's looking at the computer, the film does a hard cut and Batman is suddenly in the desert wearing a trench coat.

The desert scene is pretty long, possibly even longer than the fight between Batman and Superman. So since it's a lot to take in, let me first describe what happens in the scene and then I'll get in to what it likely means. Batman is in an apocalyptic desert wasteland with some allies. He goes into a truck looking to get some Kryptonite (the Kryptonite case is identical to one seen later in the film), but he ends up being set up, as the "Kryptonite" is actually a bomb. After mowing down some bad guys with a machine gun, Batman is eventually subdued by soldiers wearing Superman insignias, while creatures fly around picking off his allies.

Batman is next seen tied up in a dungeon with some allies on either side of him when Superman enters. Supes straight up murders Batman's allies with his heat ray vision, then he pulls off Batman's mask. He tells Batman that it's his fault for taking "her" away, and then he jams his fist into Batman's chest Temple of Doom style. The scene then makes another hard cut and Bruce Wayne is back at his computer, and a strange guy surrounded by lightning comes out of a portal and tells him that: 1) He's too early, 2) Bruce is right about "him", and 3) Bruce needs to save Lois. Then there's one more hard cut, and Bruce wakes up from in front of his computer. Confused? You should be. Here's what I think it means.

The dream is more likely a vision that's presented to Bruce via the Flash, who is the person who shows up in the portal. The Flash has the ability to travel through time, so by saying that he's "too early" he's conceding that Bruce (like the audience) probably won't know what he's talking about. When he says he's right about "him", he's talking about Superman, and when Superman says "her", he's likely talking about Lois, since the Flash explicitly mentions Superman's girlfriend. This all suggests that in the alternate future the Flash is showing Bruce Wayne, Superman has turned bad after the death of Lois Lane, and he blames Batman for it. But wait, there's more.

The other major thing to notice in the nightmare is the underlying presence of the DC Comics villain Darkseid, the leader of the alien world of Apokolips. He is likely to be the big bad in The Justice League movie, and his Omega symbol can clearly be seen etched into the ground when Batman looks out across the wasteland. Also, those flying creatures are called Parademons, and they're Darkseid's minions. So not only is Superman bad in this possible future, but it looks like Darkseid has also taken over the world. And those two facts might not be so unrelated, since Darkseid's whole mission is to remove free will from the universe. So even though Superman may be angry about Lois, he is still likely under the control of Darkseid and not actually evil.

So there you go. The scene was basically an extended trailer for The Justice League , and it had absolutely nothing to do with the plot of the movie in which it appeared. So if you were at a total loss with what you were seeing on the screen, that's OK. So was everyone else.