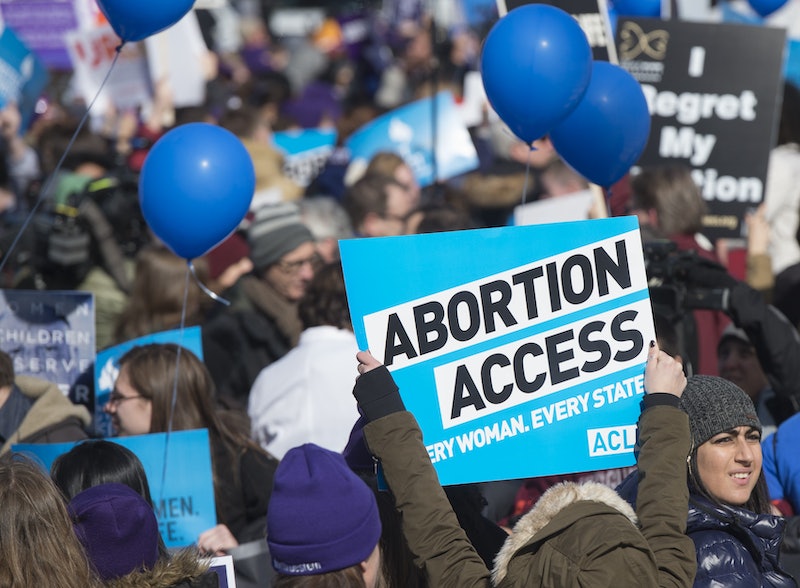 News for abortion access has been pretty dismal of late, but today there is a bright spot in the midst of all the mess. The FDA just updated requirements on abortion pill mifeprex, which not only brings its label instructions more in line with updated medical science, but will also make it easier for people who need it to obtain the pill. In other words, this is a big victory.

Mifeprex, also known as mifepristone or RU-486, is one of the pills used to induce early-stage abortion procedures. It was first approved in 2000, but although the science has changed since then, many of the FDA label instructions for mifeprex have not been updated. At least, until now. Whereas previously, the FDA indicated the pill was only safe to use during the first 49 days of a pregnancy, new labels approve it for up to 70 days into a pregnancy; people who use it are now only expected to need one follow-up visit, as opposed to two; and the recommended dosage has gone from 600mg to 200mg, reducing the risk of side effects.

The FDA label instructions are in theory non-binding; indeed, many doctors have been prescribing mifeprex according to medically accepted uses, rather than the FDA instructions, a practice known as "off-label use." However laws in some states, such as Texas's notorious HB2, require abortion care providers to administer the drugs as directed by the FDA label. Both North Dakota and Ohio also have this requirement, and similar proposals have passed but been blocked by court order in Arkansas, Oklahoma, and Arizona.

State laws such as HB2 are often portrayed by lawmakers as being ways to protect women's health, but they often accomplish exactly the opposite; placing heavy, medically unnecessary burdens on clinics and forcing them to shut down limits access to abortion, reproductive healthcare, and other necessary services. Requiring doctors to follow outdated FDA labels is just one more way in which abortion access has been limited: By imposing a shorter time frame for their usage, requiring an extra follow-up visit, and prescribing a higher dosage with increased risk of side effects, sticking with the old FDA directions made it more difficult for people to obtain a medically induced abortion. Bringing the FDA labels up to date solves that problem.

"This is a huge step in increasing access to medication abortion and it comports with the scientific evidence,” Elizabeth Nash, a senior state issues associate at the Guttmacher Institute, told The New York Times.

Mifeprex is one of two pills, the other being misoprostol, that are taken in conjunction during a typical medical or medication abortion, aka an abortion not requiring any type of surgical procedure. The procedure has an extremely low complication rate, and no long-term side effects. As of 2011, medical abortion also accounts for about 23 percent of all non-hospital abortions performed in the United States according to the Guttmacher Institute.

Dr. Raegan McDonald-Mosley, chief medical officer of Planned Parenthood Federation of America, also told The New York Times that the change would make things less confusing for patients. Previously, patients had to sign two sets of forms, one listing the drug regiment recommended by science, the other by the FDA. “Now those two things are in sync,” she said.

Plus, patients in states that require doctors to follow the FDA label for mifeprex will now be receiving the most current, medically advisable care. And honestly, the fact that they were legally not allowed to receive such care before tells you all you really need to know about how great the concern for reproductive health really is among those seeking to deny us our Constitutional right to abortion.

More like this
25 Inspiring Quotes From Black Women To Celebrate Black History Month
By Kyli Rodriguez-Cayro and JR Thorpe
24 History-Making Black Women You Probably Didn't Learn About In School
By Ayana Lage and JR Thorpe
The 8 Best Crystals For Meditation, According To A Healing Energy Practitioner & Meditation Teacher
By Lauren Moison
Savannah Guthrie Got Her First-Ever Tattoo With This Former Wild Child
By Suzanne Zuckerman
Get Even More From Bustle — Sign Up For The Newsletter
From hair trends to relationship advice, our daily newsletter has everything you need to sound like a person who’s on TikTok, even if you aren’t.