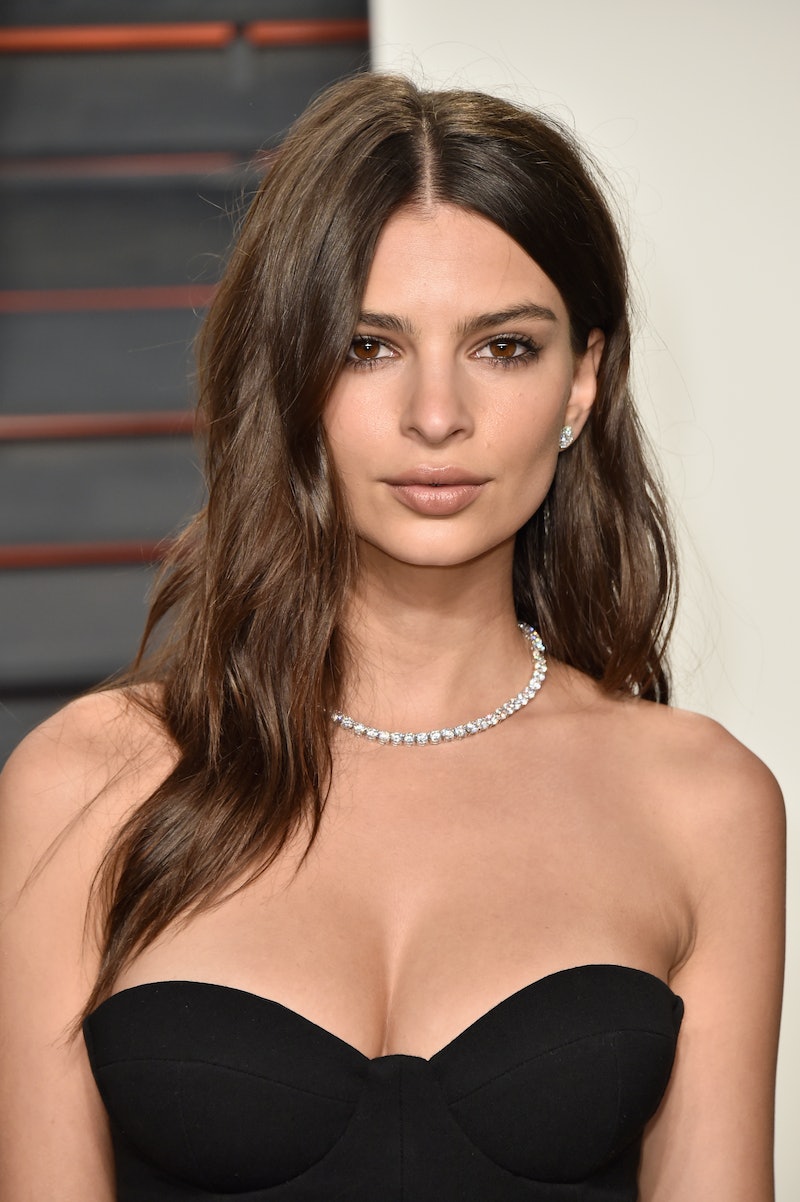 Kim Kardashian isn't the only one who knows how to break the Internet. On Wednesday, Emily Ratajkowski took a stand for women embracing their sexuality in a series of tweets, one of which included a photo of Ratajkowski and Kim Kardashian posing for a topless selfie together. Yes, there is another photo of Kardashian with a black bar over her breasts on social media, but there is so much more to the photo of the 24-year-old model/actor and the 35-year-old Keeping Up With the Kardashians star than them being nude.

What you should take away from the photo and the Gone Girl actor's tweets is the fact that Ratajkowski isn't backing down when it comes to supporting other women who own their sexuality and showing everyone why it's beyond OK for women to be sexual. Alongside the photo (where the two empowering women are giving the middle finger), she wrote, "However sexual our bodies may be, we need to [have] the freedom as women to choose [when] & how we express our sexuality." She continued,

We are more than just our bodies, but that doesn't mean we have to be shamed for them or our sexuality. #liberated Even if being sexualized by society's gaze is demeaning, there must be a space where women can still be sexual when they choose to be.

I don't know if I could've said it better myself. Far too often women are objectified and seen as property, especially when it comes to their bodies. But, as Ratajkowski puts it, when a woman takes hold of her own narrative by embracing her body and her sexuality, they shouldn't be shamed for it. If a woman loves herself, loves her body, and loves being sexual, then who cares? Like men, women are sexual beings and why shouldn't that be embraced? Finding strength in your body and sexuality is beyond empowering.

All of this stems from when Kardashian posted a nude selfie of herself in early March. In a matter of minutes, she broke the Internet (again) and received a lot of negativity for it. However, many people came forward and supported Kardashian, including Ratajkowski. The reality star appreciated the love and even sent flowers and thank you notes to Ratajkowski and the other women. Upon receiving the flowers, Ratajkowski posted on Instagram:

Thank you for the beautiful flowers and note @kimkardashian it's so important that we let women express their sexuality and share their bodies however they choose. "Merely external emancipation has made of the modern woman an artificial being. Now, woman is confronted with the necessity of emancipating herself from emancipation, if she really desires to be free." Emma Goldman

This isn't the first time Ratajkowski has stood up for herself and other women who aren't ashamed of their sexuality. In February, she wrote an essay for Lenny Letter about being sexualized at a young age and how she's come to be proud of her sexuality. Part of her essay reads:

The implication is that to be sexual is to be trashy because being sexy means playing into men's desires. To me, "sexy" is a kind of beauty, a kind of self-expression, one that is to be celebrated, one that is wonderfully female. Why does the implication have to be that sex is a thing men get to take from women and women give up? Most adolescent women are introduced to "sexy" women through porn or Photoshopped images of celebrities. Is that the only example of a sexual woman we will provide to the young women of our culture? Where can girls look to see women who find empowerment in deciding when and how to be or feel sexual? Even if being sexualized by society's gaze is demeaning, there must be a space where women can still be sexual when they choose to be.

Let me also note that Ratajkowski starred in Robin Thicke's "Blurred Lines" music video, which received a lot of backlash for being sexist. However, she doesn't think so and loves how it celebrates women. In a 2013 interview with Esquire, after being asked if she found the video demeaning to women, she said,

I really appreciate the people who watch out for that stuff, and I'm sensitive to those sort of things. On the surface level, the naked women dancing, I understand that can be perceived that way. But we're directed to have a sort of confidence, a sarcastic attitude about the whole situation. That eye contact and that attitude really puts us in a power situation.

She continued about the music video,

The director, Diane Martel, is a woman, and so is the DP. We really worked on that and tried to convey that in the video. The way we are annoying them, being playful and having a good time with our body — it's something very important for young women today to have that confidence. I think it's actually celebrating women and their bodies.

Based on her many statements on the matter, it's clear that feeling empowered and inspiring other women to feel confident in their sexuality is something extremely important to the model and something she will continue to discuss. Ratajkowski isn't backing down anytime soon.