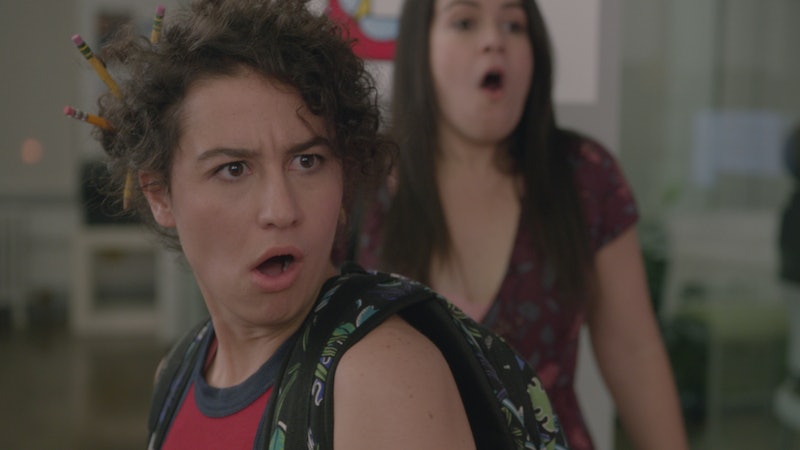 Hillary Clinton's campaign to become the Democratic presidential nominee might have gotten the greatest bump when Clinton appeared on Broad City in the March 16 episode "2016." And unsurprisingly, the feminist show didn't shy away from the sexism that Clinton faces for being a female in a power position, with a little help from fellow strong woman and Sex and the City alum Cynthia Nixon. When Ilana ended up in the Hillary Rodham Clinton campaign headquarters, she joined the cold calling force with an orgasmic flourish. Nixon was her fearless leader in this volunteer position and she gave all of the volunteers some tips when it came to calling on behalf of the Clinton campaign, including how to deal with some outrageous topics that are asked about the former Senator of New York.

After telling the volunteers to promote Clinton's many achievements, like the fact that she was a practicing lawyer and Secretary of State, she dropped a fact that even Ilana didn't know — that Clinton won a Grammy. (She won in 1997 for Best Spoken Word or Non-musical Album for the audio version of her book It Takes a Village.) Yet, after listing Clinton's accomplishments, Nixon's Barb inevitably had to address the sexist questions that might come up from cold calling about Clinton.

Nixon told the cold caller volunteers not to answer any questions regarding Clinton's makeup, bras, or panties. While a candidate like Trump doesn't shy away from talking about his private parts, Clinton — as a female candidate — is targeted for her appearance and clothing much more so than any of her male candidates. (With that being said, is it sexist of me to compliment Clinton on how she looked on Broad City?)

Then Nixon gave the volunteers some answers to "common" questions that are asked about Clinton. Of course, these were made up for the comedic series, but I'm pretty sure they don't stray too far from the truth. These questions were a wide range of stereotypes that women must face, like generic female slams of whether or not Clinton cries at the office or if she can read a map (answers are no and yes). Yet, they also included the more bizarre question of if she'll make male birth control a platform (uh, no because it's fictional) to just simply if Clinton is a witch (uh, no again).

The frustration over these asinine questions was highlighted by Nixon who understandably freaked out when she said these questions are asked every single day. Because whether you are voting for Clinton or not this election, she doesn't deserve to be targeted solely based on her gender.