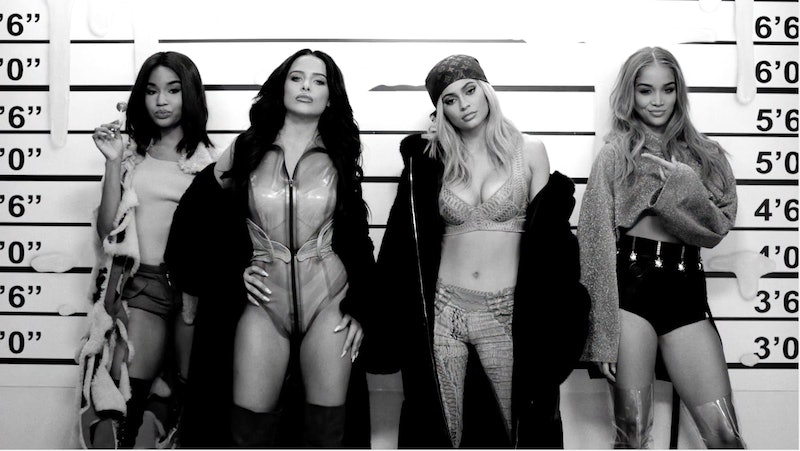 It's official: Kylie Jenner is slowly building her own makeup empire. Considering her Kylie Lip Kits are always selling out, it's no surprise she decided to expand the brand. On Thursday, Jenner released the "Glosses" music video, hinting at a lip gloss line launching on April 1. Although I'm calling it a music video, it's more like a mini movie. Think 2012's Spring Breakers meets Lil Mama's "Lip Gloss" and you'll have a decent idea of what to expect. Similar to Spring Breakers, Jenner has her own posse, but nope, it doesn't include Selena Gomez, Vanessa Hudgens, or Ashley Benson. If you're wondering, who are the other girls in Kylie Jenner's "Glosses" video? Don't worry, I've got you covered.

Although the ladies go by nicknames in the video — Like, Literally, and So Cute — those obviously are not their real names. If I had to guess, those are the names of the upcoming lip gloss shades. (Touché, Kylie!) Honestly, I'm pretty surprised she didn't have her real life BFFs, like Jordyn Woods or Stassi, star alongside her. Instead, the music video features three models, Karin Jinsui, Mara Teigen, and Jasmine Sanders, as indicated on director Colin Tilley's Instagram. Combined, these three ladies have more than 2 million Instagram followers, so Jenner sure knows how to pick her co-stars.

Here's everything you need to know about "Glosses" leading ladies, because knowing how popular Jenner is, these three should probably be on your radar.

Karin Jinsui is a beauty vlogger, according to Galore. Jinsui describes herself as a "life sized Bratz doll" on Instagram — where she has 469,000 followers. She also has a YouTube channel featuring hair and beauty related tutorials. There's not a ton of info available about her online, but she sure loves to post selfies on her Instagram account. She's also not on Twitter, which she makes clear in her bio — making it all the more difficult to learn more about her.

Mara Teigen is signed to Wilhelmina Models, according to her Instagram bio. Like a fellow model with the same last name (ahem, Chrissy Teigen), she tried to be in the Sports Illustrated Swimsuit Issue. The 21-year-old participated in their 2016 casting call. She's modeled for brands like Love Culture and H&M. She already has more than 492,000 Instagram followers, but I'm guessing this is just the start of her modeling career.

3. Jasmine Sanders (aka So Cute)

Last but not least, Jasmine Sanders goes by the name "Golden Barbie" on social media. Like the others, she's a model and she's got 1.4 million followers. The 24-year-old is signed to The Society Model Management. Sanders has posed for Seventeen , Vogue , Lucky , Forever 21, and billboards in Times Square, according to xoNecole. Although she's been rumored to date everyone from Nick Cannon to Jenner's own brother, Rob Kardashian, Sanders told xoNecole, "Half of the people that they say I dated I didn’t at all."

So, there you have it! You may want to start following these three ASAP. Knowing Jenner's fame, they'll be blowing up in no time.

More like this
Kylie Jenner Goes Into Labor & Welcomes Her Baby On 'The Kardashians'
By Jake Viswanath
Confused About Blush Placement? This TikTok Makeup Hack Will Help
By Olivia Rose Ferreiro
Billie Eilish Teased The Debut Of Her New Fragrance
By Audrey Noble
12 Bellissima Beauty Moments From Milan Fashion Week S/S 2023
By Olivia Rose Ferreiro
Get Even More From Bustle — Sign Up For The Newsletter