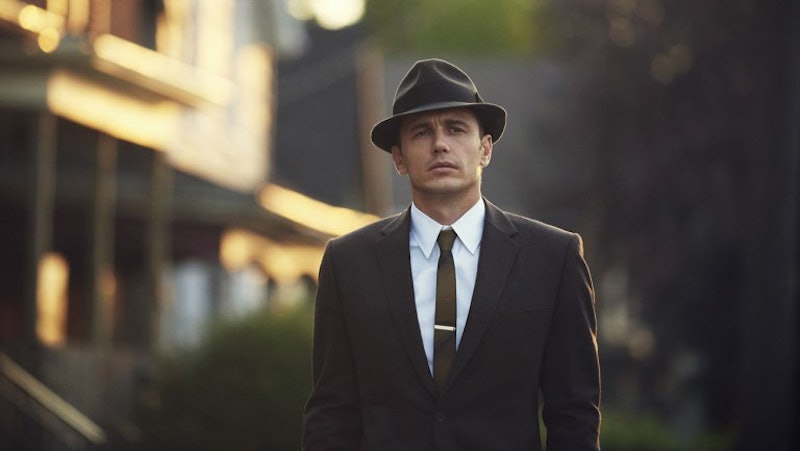 Jake Epping may be making his final journey into the past on the series finale of 11.22.63. With the titular date rapidly approaching on Jake's timeline, it is time to see if he can hold it together long enough to stop Lee Harvey Oswald from assassinating J.F.K., therefore altering the course of history. Casual. With the end of Hulu's first popular original series rapidly approaching, fans have started to wonder if Season 2 of Hulu's 11.22.63 will happen. The show has evolved from just another James Franco vehicle into a breath of fresh air for the streaming site, and audiences everywhere are eager to see if the series will be renewed.

The hours leading up to the finale surely breed enough anticipation. When we last saw Jake (James Franco), he had just defeated the throes of a crisis of purpose and hotwired a car in order to stop Lee (Daniel Webber) from getting too comfortable at the Texas Book Depository. An Entertainment Weekly exclusive clip reveals that a dead engine isn't the only roadblock that Jake encounters on the way to thwart Lee. Bonnie Ray Williams (Grantham Coleman) — one of Lee's coworkers and a key witness during the Warren Commission — appears, completely throwing Jake and complicating things further. If Jake is not successful in completing his mission, then Lee will shoot J.F.K. and history will remain unchanged — for better or for worse.

Hulu's first largely successful original show pushes the limits on perception and reality every Monday night. The show's portrayal of America in the 1960s has been called "sumptuous" by its star, Daniel Webber, and critics seem to agree. In addition to strong performances from a talented cast, the show is produced by J.J. Abrams (Lost, and oh, just Star Wars: The Force Awakens) and based on a novel by Stephen King. All things considered, fans are not willing to let a television show of this quality escape unbidden.

There has been no hard confirmation on whether or not 11.22.63 will be back for a second season and the always forthcoming Franco has been surprisingly mum on whether or not the show will be back. Showrunner Bridget Carpenter also did not speak on the renewal of the series, but did tell Variety that the series is rich with "Easter eggs" for true Stephen King fans to discover. Thanks for your help, Bridge.

Unfortunately for fans, there is one large fact working against the possible renewal of 11.22.63. There's the small issue of source material: It's pretty finite and doesn't really lend itself to more story beyond its conclusion. Then again, that didn't stop The Leftovers on HBO.

Though there is no official word as to whether or not 11.22.63 will be back for a second season, fans could always revisit the series on Hulu. There's certainly enough to dig into for a second viewing.