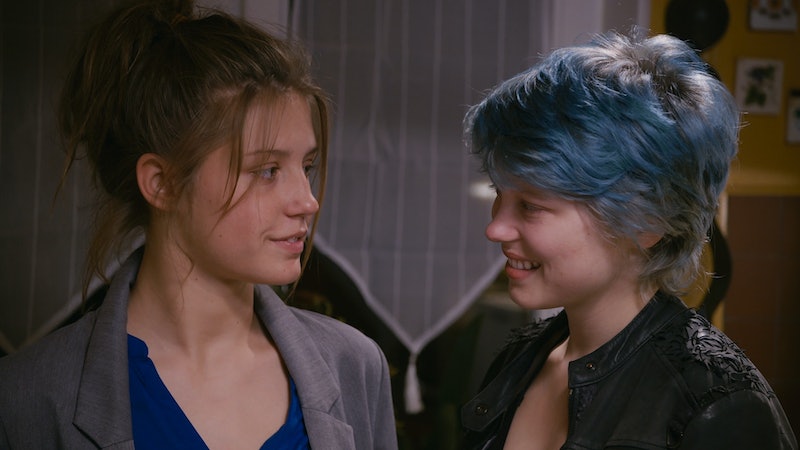 We’re always hearing that we could be having better sex, a better orgasm, or a better relationship. But how often do we hear the nitty-gritty of how we can actually better understand our deepest desires and most embarrassing questions? Bustle has enlisted Vanessa Marin, a sex therapist, to help us out with the details. No gender, sexual orientation, or question is off limits, and all questions remain anonymous. Now, onto today's topic: how to introduce your parents to your first same-sex partner.

Q: I’m a 25-year-old woman in my first serious relationship with another woman. I came out to my parents as bi several years ago. To put it simply, the conversation was weird. They didn’t say anything outright disapproving, but you could tell that they were very uncomfortable. They both come from conservative backgrounds and had never met anyone openly bi or gay. I think they’re hoping this is just a phase (of course it’s not). We haven’t talked about my sexuality since then, and they’ve never met anyone I’ve dated. This relationship that I’m in now is really serious, and I’d like my parents to meet my girlfriend. What can I do to try to make this meeting a success? My girlfriend’s parents are totally cool and open, and I’m scared she’s going to meet my parents and feel judged. I know my parents love me, but I honestly have no idea how they’re going to react, and I’m beyond nervous.

A: Thanks for the question! Meeting parents for the first time is always nerve-wracking. Having your parents meet your first same-sex partner adds an extra wrinkle, especially if they haven’t been outwardly supportive. But it’s great that you say you know without a doubt that your parents love you. Meeting a girlfriend might be something new for them, but hopefully they’ll come around soon enough. Here are eight steps for helping your parents adjust to your first same-sex relationship.

If you’re worried about how your parents might react, I’d suggest trying to meet with them privately beforehand. At the very least, have a conversation with them, even if it’s just over the phone. You want to try to minimize the amount of awkward conversation your girlfriend has to be exposed to, while also giving your parents lots of time to ask questions or learn more about your relationship.

Tell them you’re in a serious relationship and want them to meet your girlfriend. Tell them a bit about her. What initially attracted you to her? Why are you so serious about her? What are some of her greatest qualities? What are some of the sweet things she’s done for you? Get them excited about meeting her, and help them get to know more about her before everyone meets. Keep in mind that most parents are nosy, and would probably have a million questions regardless of the gender of your partner.

It’s also helpful to talk to your partner about what to expect from your parents. Does your girlfriend know about your parents’ backgrounds? Even though your girlfriend’s parents seem more open to her sexuality, I’m sure she can relate to some of the anxieties that are coming up for you. Tell her what she should expect from your parents. Give her a few ways to win them over, like asking about their favorite volunteer organization or their passion for hiking.

In any conversations you have with your parents or your girlfriend, be honest about the fears that you have about everyone meeting. Whenever we air out our fears, they instantly feel a little bit more manageable.

Tell your parents something like, “I know you guys love me, but I’m still really nervous about how you’ll react to meeting my girlfriend. I want you to treat her no differently than you’d treat a boyfriend.” Tell your girlfriend something like, “I’m worried my parents won’t be as supportive as yours are, and I’m scared about what that might be like for you. I don’t want you to get hurt.” If everyone knows how nervous you are about them meeting, they’re more likely to make an extra effort to be cordial with each other. At the very least, your parents and girlfriend have one thing in common — their love for you!

4. Give Your Parents Some Resources

There’s no excuse for being a bigot. Period. But don’t underestimate the value of some education and exposure. Your parents may have been awkward in your initial conversations because they didn’t know what to say or how to talk to you about your sexuality. Maybe you simply caught them off-guard. Maybe they weren’t sure which questions were OK to ask, or which topics were socially appropriate to talk about.

Has there ever been a time where you were exposed to something new to you for the first time? Maybe you met a new friend who came out to you as trans, or a couple who decided to open up their relationship. There’s nothing “wrong” or “complicated” about being gay, bi, kinky, poly, trans, intersex, queer, or questioning, but unfortunately, being cis, straight, and vanilla is seen as the “default.” It’s a lot easier to put your foot in your mouth if you haven’t had any exposure to the amazing diversity of gender and sexuality.

Direct your parents to the “Coming Out Help For Friends, Families & Allies” section of PFLAG’s website. Give them any books or resources that you may have found helpful during your own coming-out process. Tell your parents something like, “I know this is new for you guys, but I want you to feel comfortable talking to me about it.” It might take some time, and there might be some stumbles along the way, but your parents might surprise you!

One way to minimize the potential awkwardness of your first introductions is to arrange for a quick meeting. Meet for a cup of coffee, or a cocktail, in a neutral location. Tell your parents beforehand that you can stay for about an hour or so, but that you have another commitment afterwards.

Telling your parents that you and or your girlfriend have a commitment afterwards is a great escape plan in case things go awry. You can also arrange a code word or signal with your girlfriend beforehand that means “I need to get out of here now.” Hopefully you won’t ever have to use it, but it can be nice to know you’ve got something to fall back on.

Have conversations with your partner and your parents (separately) after the first meeting. If your parents were surprisingly open, let them know how much you appreciated their response. Say something like, “I know our first conversation about me being bi was strange, but I really appreciated how welcoming you were to my girlfriend. It means a lot to me.”

If anything unsavory happened, you may have to apologize to your girlfriend and be more firm with your parents. You might want to consider saying something along the lines of, “I know meeting a girlfriend is new for you guys, but she’s going to be in my life whether you want her to be or not. If you want to have me in your life, you’re going to have to treat her with kindness and respect.”

First meetings are tricky, regardless of the circumstance. Parents and partners alike usually feel at least some degree of awkwardness. Relationships take time to build. If your parents are outright rude or purposefully offensive, that’s one thing — like I said, there's no excuse for bigotry. But if it’s just a little strained and weird, try not to read into the first meeting too much. Give everyone some time to process, then set up a second meeting. Then a third. Then a fourth.