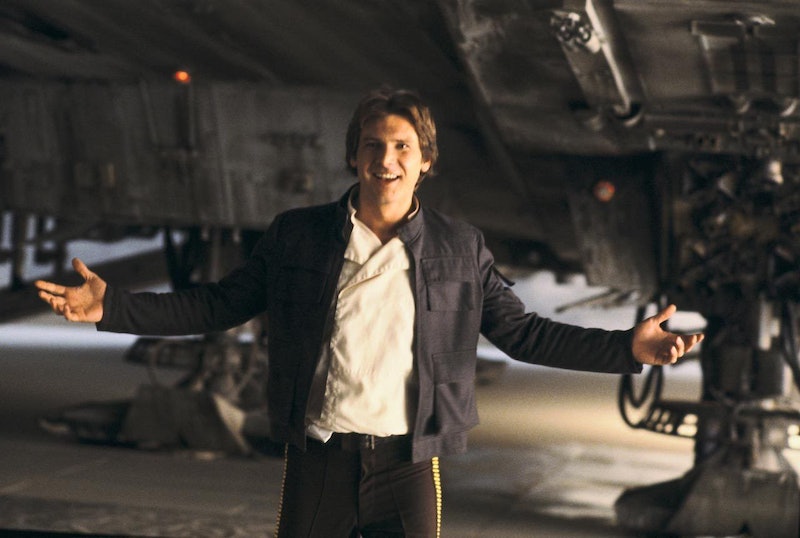 Here are 17 lessons Star Wars has provided, from the importance of having a fluffy bestie (Chewbacca for the win) to the power of female leaders to why you should always trust a space pirate. Fans haven't learned everything we can from Star Wars yet, and there's no doubt that Star Wars: The Force Awakens ' Finn, Poe, Rey and Kylo Ren have a lot more left to teach us in the upcoming films. But the lessons below are certainly one hell of a start.

You never know who might turn out to be your long lost twin.

2) Have A Secret Language With Your BFF

Chewie and Han Solo are peak BFF, and sometimes it seems like Han Solo is the only person who can understand Chewie (mostly because he is). The fact that they share a language not widely known by other characters makes their bond even stronger.

3) Fluffy BFFs Are The Best BFFs

Look at Chewbacca and tell me you don't want to hug him. I dare you.

Be nice to your friendly neighborhood droids. You never know when they'll come in handy, whether it's by leading you across the galaxy or saving your life.

5) Revenge Will Turn You Evil

If Anakin/Darth Vader has taught us anything, it's that when you let revenge take you to the Dark Side, you never come back.

He'll totally change for you. No worries.

7) Hair Is Your Most Important Accessory

Kylo Ren, Leia, and Queen Amidala/Padmé all have one thing in common: excellent hair.

8) To Sound Wise, Speak Out Of Order You Must

Like it or not, Yoda was really onto something with the whole talking backwards thing.

General Leia for the win.

A lightsaber would have come in super handy in 127 Hours.

Even in a galaxy far far away, no family is perfect. In fact, family in Star Wars is pretty much your saving grace and your worst nightmare. It's complicated.

13) People Who Only Wear Black Are Not To Be Trusted

If you see someone wearing a large, flowing black coat over a black uniform, they are probably an evil dictator. (So, basically, New Yorkers, you should probably run for your lives.)

14) Everything Is Pointless Without A Pilot

If Star Wars has taught us anything, it's that in a galaxy where planet hopping is a regular occurrence, if you don't have a ship and a pilot to fly it, you're basically dead.

16) You Don't Get to Choose Your Parents

Poor Luke had to learn this lesson the hard way.

17) People Aren't All Bad Or All Good

Like the Force, people exist in a balance between the good and the bad. Even heroes like Luke Skywalker and Princess Leia feel a bit of darkness sometimes. Nobody is all good or all evil, we're all just people. Yes, even Darth.

Star Wars, taught us much, you have.