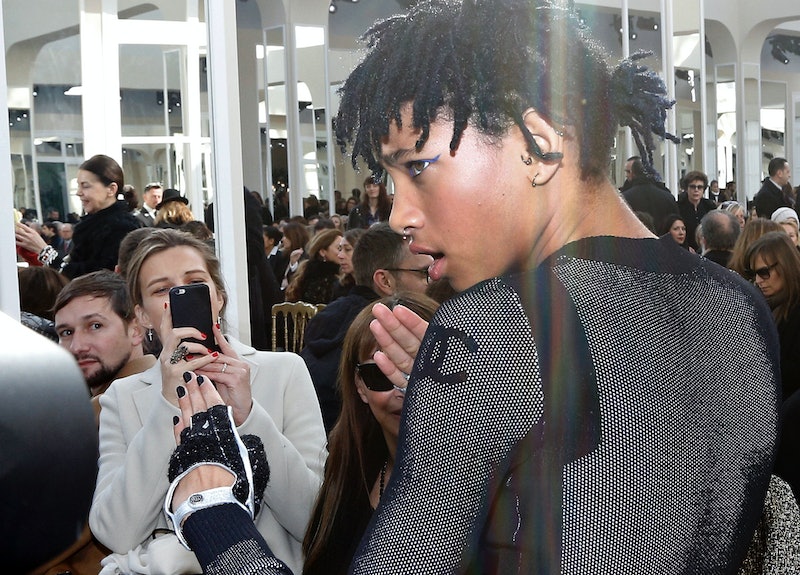 Willow Smith may only be 15 years old, but it's safe to say that she's one of the coolest teenagers out there. Not only has she sung some pretty dope songs, but she's also a rising style star. Although Willow Smith at the 2016 MTV Movie Awards wasn't a reality, the up-and-coming star was seemingly still doing something pretty rad.

At 15 years old, I'm pretty sure I spent my days hanging out at the mall, drinking overpriced frapuccinos and watching The O.C. and One Tree Hill. I certainly was not whipping my hair, being followed around by paparazzi, or being idolized by other teens. And I definitely wasn't attending a Chanel fashion show, like Willow did in March 2016.

It's been six years since "Whip My Hair" came out, but Smith certainly hasn't stopped her game. And coming from a family with Will, Jada Pinkett Smith, and older sibling Jaden — who did make it to the MTV Movie Awards — it would be nearly impossible not to have such a unique sense of style. After all, Jaden recently starred in Louis Vuitton's spring women's campaign. That was no small feat. But Willow, too, has her own unique sense of style.

Although she skipped the MTV carpet, it seems Smith was out on the town with friend Jaira Miller. The pair spent a delightful evening nomming on what looks to be either hot dogs or mac and cheese, as noted on Smith's Instagram with the caption, "Last night was L í T." She was sporting a black-on-black look, reminding us all why a leather jacket will always be essential along the way.

In a recent interview with W Magazine, Smith noted that her parents only tried to restrain her fashion choices when she was six or seven years old. "I wanted to wear things then that might have been too crazy. But now they know I set my own boundaries.”

And it seems that has been key to her ultra-cool personal style. You can often find Smith in head-to-toe leopard print, punk-inspired looks, knee-high boots, and even sleek pantsuits. Point is this: She's not afraid to take risks.

But on the evening of April 9, she also proved why classics are classics. You just can't go wrong with a lightweight leather.

Her sartorial prowess seems only fitting, considering her father, Will Smith, received the Generation Award at the 2016 MTV Movie Awards. Props to both Willow & pops for kicking butt on the style front.