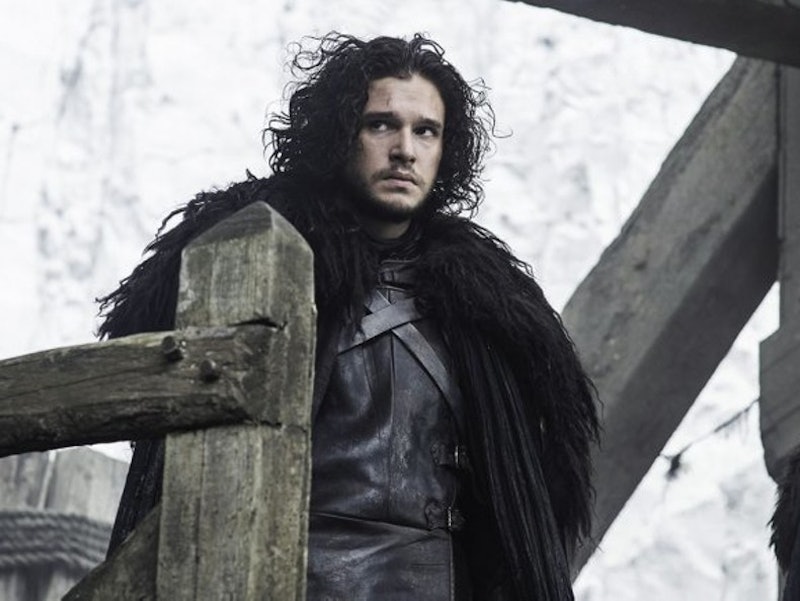 Gird your loins, Game Of Thrones fans: if you're not already knee-deep in forums, fan sites, and podcasts, there's a new Game Of Thrones show coming your way. Sadly it's not a spin-off, but it's almost as good: HBO is launching After The Thrones, catching on to the trend of shows like Talking Dead and Talking Bad to recap the previous night's episode. According to Season 6 of GoT premieres in a few weeks, and After The Thrones will premiere on Monday the 25th. Hosted by Andy Greenwald and Chris Ryan, who helm Grantland's "Watch The Thrones" podcast, the show will be available on HBOGo, and HBO Now and HBO On Demand every Monday throughout the season. But if you can't wait until then, there are plenty of sources to fulfill your Game Of Thrones theory-thirst before that.

There are almost as many GoT podcasts out there are there are horrible people in Westeros, and there's something for everyone. If you want a comedic take on the show, one of the best podcasts is "Boars, Gore And Swords," hosted by stand-up comedians Ivan Hernandez and Red Scott (Ivan and Red are very GoT names), who review and recap episodes and also take a look at George R.R. Martin's A Song Of Ice And Fire source material.

And if you want a little taste of what's to come on After The Thrones, definitely take a listen to Grantland's Watch The Thrones, with the upcoming hosts of HBO's after-show, Andy Greenwald and Chris Ryan. In my opinion the best recaps and theories are the ones full of humor, because although there are some darkly funny moments on the show, they can't really make up for all the murder.

The fansites are large in number, some better than others. My personal favorite is Watchers On The Wall, which, among its extremely up-to-date news, casting, and photos from the set (they have little birds everywhere), also has its own podcast called "Game Of Owns." It's got a heavy comparison to book materials, which lends itself well to pulling theories.

Though the other big, credible fan site Winter Is Coming doesn't have a podcast in-house, they do make up for it with their own news and rumors, heavy on the rumors, which I love. They're also on top of everything the GoT cast is doing outside of the show, and feature a lot of interviews from cast members, most of which focus on spoilers they might have slipped (or refuse to). Another old faithful staple is the Reddit forum.

So now that you have both Season 6 of Game Of Thrones and Season 1 of After The Thrones to look forward to, prep yourself by listening to some of these podcasts and reading some fan sites (if you don't already; I don't mean to question y'all's dedication). Or, if you're patient, you can wait, because winter is almost here.