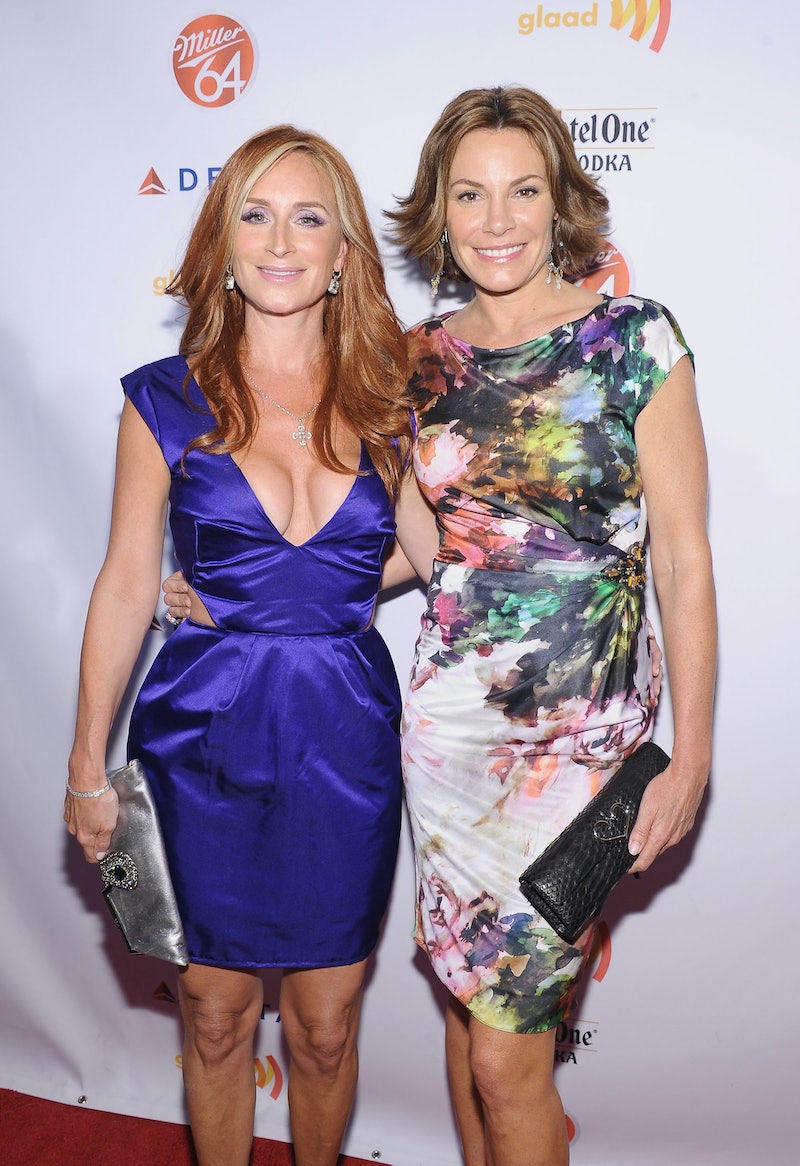 There's a lot happening for the Real Housewives of New York City cast these days, including the premimere of Season 8 on Wednesday, April 6 and an upcoming wedding for LuAnn de Lesseps. And when it comes to her New Year's Eve nuptials to Thomas D'Agostino Jr., there is one particular New York Housewife who has the "Girl Code" singer's back. Sonja Morgan tells Bustle she supports The Countess in her current relationship, and believes she will definitely be invited to the wedding, despite their history when it comes to dating the same men, like Aviva Drescher's ex-husband Harry Dubin and even LuAnn's current fiancé, who Sonja dated years ago.

"Oh, you know, LuAnn and I are very close no matter what," the "international fashion lifestyle brand" expert says. "I've always said, 'No man will come between us,' and you know there have been several. (laughs) We are girlfriends and none of us are perfect. Men come and go. So, I am 100 percent sure I'll be invited."

As previously mentioned, even though Sonja and LuAnn's future husband have a history, that's not stopping her from hoping The Countess has a fulfilling and happy future as a married woman. The 52-year-old reality star gushes,

Oh, I love her. I love Tom. I just want the best for them. I just want her happy. It's tough being on a show, being in the public eye to find love, first of all, and then maintain it. Even when you're not on a show, it's hard to maintain love.

As for whether or not The Countess will televise her wedding, Sonja isn't sure. "Who knows! ... I don't know," Sonja says. "You'll have to tune in this season and see how much she bears, how much she shows."

Well, here's hoping it is televised in some capacity, because who doesn't want to watch that? Plus, I'm sure all of Sonja's fans will want to see her in action and check out what she gives LuAnn as a wedding gift.

Per Sonja, LuAnn is "sentimental," so she'll gift her something meaningful. "Probably something for her apartment with Tom that she could look at on a daily basis," the Sonja Morgan New York fashion designer dishes. "Maybe, you know, a silver candlestick or a crystal vase for her bedside. Something romantic, you know, like that."

Whatever she gives LuAnn, I'm sure it will have Sonja written all over it. All that really matters is that The Countess will definitely have Sonja's support on her wedding day.