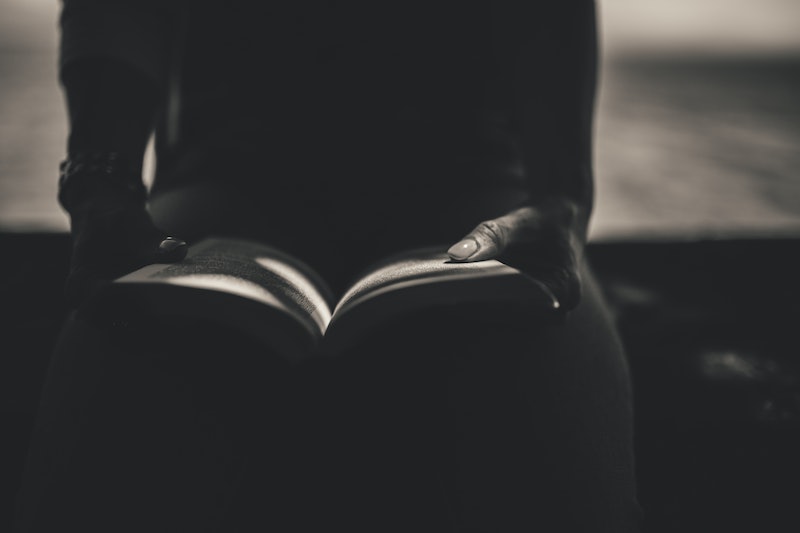 I, like most judgmental readers, enjoy pawing through bookstore shelves and reading first line after first line. Back covers and dust jacket synopses are all well and good, but nothing tells you what you're in for like a first sentence. Some opening lines pull you in right away. Others are so beautiful, or strange, or funny that you wonder what else this new book has in store for you. And then some opening lines are so creepy that you immediately shut the book and go home to lie in bed, sleepless, because you're so terrified and books are monstrous.

These are ten books with terrifying first lines. These first lines might make you reconsider whether or not you actually want to read the book, because it seems like they might all be creepfests the whole way through. But if you're the sort of person who actually likes to be scared out of your mind, or if you would like some insomnia to spice up your nights, then you might want to check out these spine chilling opening lines:

"It was a pleasure to burn."

There's a reason that this simple, creepy line is one of the most well-known openers in all of literature. It gets right to the point. This is a book in which people take pleasure in burning things (specifically books, as we soon find out). And, without any further context, that's already terrifying.

2. We Have Always Lived in the Castle by Shirley Jackson

“My name is Mary Katherine Blackwood. I am eighteen years old, and I live with my sister Constance. I have often thought that with any luck at all, I could have been born a werewolf, because the two middle fingers on both my hands are the same length, but I have had to be content with what I had. I dislike washing myself, and dogs, and noise. I like my sister Constance, and Richard Plantagenet, and Amanita phalloides, the death-cup mushroom. Everyone else in our family is dead.”

3. The Bell Jar by Sylvia Plath

"It was a queer, sultry summer, the summer they electrocuted the Rosenbergs, and I didn't know what I was doing in New York."

Perhaps the most terrifying part of this opening line is the fact that the subject of electrocution is dropped almost at once. You just keep reading, waiting for an explanation about the Rosenbergs, feeling increasingly uneasy... until about halfway through the novel when the narrator falls off the deep end and drags you down with her.

4. Someone Has Been Disarranging These Roses, by Gabriel Garcia Marquez

“Since it’s Sunday and it’s stopped raining, I think I’ll take a bouquet of roses to my grave.”

There's nothing like the words "I think I'll take a bouquet of roses to my grave" to instantly take a short story from pleasant to utterly creepy beyond all reason. Gabriel Garcia Marquez is a master of the beautiful-but-kind-of-creepy genre, and this story is no exception.

5. It by Stephen King

“The terror, which would not end for another twenty-eight years – if it ever did end – began, so far as I know or can tell, with a boat made from a sheet of newspaper floating down a gutter swollen with rain.”

What else would you expect from the beginning of one of Stephen King's most well known novels? This is the book that inspired thousands of children to have a lifelong fear of clowns (and also sewers and possibly balloons).

6. The Call of Cthulhu by H.P. Lovecraft

“The most merciful thing in the world, I think, is the inability of the human mind to correlate all its contents. We live on a placid island of ignorance in the midst of black seas of the infinity, and it was not meant that we should voyage far.”

Lovecraft was a pretty terrible person, but boy can he write a story about a godlike monster far beyond the realm of human comprehension. Cthulhu, as you might guess, exists outside of our "island of ignorance," and yet Lovecraft can still make you unreasonably scared of him.

"They shoot the white girl first. With the rest they can take their time."

Toni Morrison is so renowned for her masterful, poignant storytelling that sometimes we forget she can be terrifying as hell when she wants to be. This book opens with a scene of mass violence that sets the stage for a story of exile and survival in a hostile world.

8. The Tin Drum by Günter Grass

"Granted: I am an inmate of a mental hospital; my keeper is watching me, he never lets me out of his sight; there's a peephole in the door, and my keeper's eye is the shade of brown that can never see through a blue-eyed type like me."

This first sentence straddles that fine line between "creepy" and "oh my god I'm putting this book down right now and not reading any more ever." It's an upsetting opening to an upsetting book. If you enjoy feeling upset, then Günter Grass and his unsettling prose have got you covered.

9. The Lovely Bones by Alice Sebold

"My name was Salmon, like the fish; first name Susie. I was fourteen when I was murdered on December 6, 1973."

If gruesome murder terrifies you, then here's a killer first line. Granted, the rest of The Lovely Bones is more sad than thrilling and terrifying. But there's something so matter-of-fact about the opening line and the introduction to Susie's murder. You're not sure exactly what you're in for, but you know that something disturbing is coming your way.

"When I think of my wife, I always think of her head."

It's rare that you can tell from one sentence that a literary couple should absolutely not be together. But this is one of those occasions. Gone Girl is, in some ways, a murder mystery, but it's also a deeply creepy portrait of a wildly dysfunctional marriage. Without even mentioning death or blood or murder, Flynn creates a chilling atmosphere with this simple first sentence.