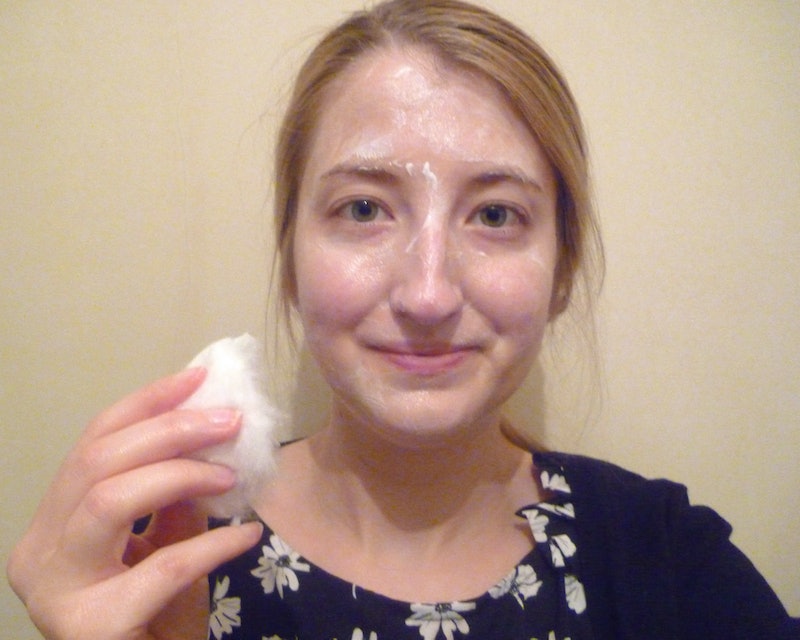 As someone who adores vintage fashion and beauty, is a member of a vintage girl band, and idolizes Golden Age Hollywood starlets, I thought it was high time I followed a 1950's beauty routine — in particular focusing on skin care. I really enjoy getting all dolled up and wearing Marilyn Monroe-inspired makeup and Audrey Hepburn style dresses, but I'd never thought about the basics: a 1950s skin care routine. Of course, it had crossed my mind to follow a vintage skin care routine that would complement my similar interests, but it was just a passing thought until recently.

Not long ago, I dressed like a '50s teen for a week and I also recreated some of Marilyn Monroe's vintage photos. I discovered that I knew how to outwardly portray vintage fashions and beauty looks of the time, but I didn't have the same divine, camera-ready skin that many 1950s teenagers and Monroe flaunted. I realized I had been missing something all along — a skin care routine to match. Because how could one paint on top of a canvas that was not designed for a special kind of art? I was super excited to unearth the skin care secrets of the decade's gals that would hopefully give me a flawless '50s complexion.

What Does A 1950s Skin Care Routine Look Like?

I am no expert in 1950s beauty history, so I delved into the Prelinger Archives on YouTube, where I found some fantastic educational videos that were filmed in the '50s. In addition to this, I decided to cross reference my findings with my grandmother, who was in her late teens during the 1950s.

First, I discovered a video ("Vintage 1950s Beauty Guide: Part One – Cleansing") that had been uploaded to the Glamourdaze YouTube Channel. Although this short film indicates the importance of a cleansing cream to remove cosmetics, its main focus is showing viewers how to properly clean their skin. The narrator says, "nothing can take the place of your daily bath or shower. This is the time to give your skin a good invigorating workout.”

The actress uses a wash cloth to scrub her face and the narrator later says, “Your bath or shower should end with a brisk rinsing to carry away all soapy residue. This is really the best part of the shower, it stimulates the skin and wakes it up all over.” Although it's not entirely clear, it appears that the actress turns the temperature down at the end of the shower. Another educational film from the Prelinger Archives called "Good Grooming For Girls," which appears to be from 1956, shared the same sentiment, “Don’t just slide a wash cloth around and call your face clean, friction is half the battle and the back of your neck and your ears get their share of attention.”

So, the first step of my 1950s-inspired skin care routine would include: vigorously washing my face, ears, and neck every morning with a wash cloth, warm water, and Pears Transparent Soap, followed by a quick rinse with cold water.

The next step in a '50s skin care routine was a cleansing ritual, which helped to remove makeup. The presenter of "Good Grooming For Girls" looked to be an expert in all matters of beauty, grooming, and general appearance. The presenter says,

The most important thing I can tell you about the care of your skin from the outside is: Keep it clean. For that you need a cleansing cream and soap and water. Here’s how to do a really thorough job of removing makeup: First, pin your hair well back out of the way and if you wish, cover it with a hand towel. Start to work with the cold cream, smooth it on thoroughly all over the face, clear up to the hairline and down under the jaw. Give extra attention to the pockets at the base of the nose and the cleft of the chin. Spread the cream on using little spiral motions, always working upwards. But please, not too rough — no need to pull or push your face around. It’s a gentle massage with the cream that gets results.

The model appears to use Pond’s Cold Cream. To remove the cream, along with any makeup, the presenter says, “Now tissue the cream off with long thorough sweeps. Switch to a clean spot in the tissue after each sweep, so that you don’t track the grime right back again. At this point, lots of girls like to rinse with more cold cream, to make sure they’ve removed every bit of stale makeup." She later explains that makeup comes after cleansing. Again, I fact-checked with my grandmother who confirmed what I told her, yet added that she believed it was more common to remove the cold cream with cotton, rather than use tissues.

So the second part of my skin care routine would include cleansing with Pond's Cold Cream (using the method from "Good Grooming For Girls"), and removing the cream with cotton wool. I don't often wear makeup, so I thought I would complete this step each night to remove any dirt from the day. However, if I did end up wearing makeup, I planned to cleanse before applying the makeup and repeat again at the end of the day to remove the makeup.

I had originally wanted to purchase some Pond's Cold Cream from the '50s, however, after scouring the web, I discovered many of the vintage pots for sale were empty or had a small amount of cream inside. It then dawned on me that using cosmetics that were over half a century old probably wasn't the wisest idea. So I settled on a new bar of Pears Transparent Soap and a new pot of Pond's Cold Cream. I was armed and ready with my products and knowledge and excited to begin.

Here I am at the beginning of the week, pictured after a spin on my exercise bike.

As you can see, I had a few small pimples on my cheeks. I was really hoping that this '50s skin care routine might banish them once and for all, as they always seem to keep coming back.

I began by washing my face in the shower after these pictures were taken. I enjoyed how invigorated I felt after rubbing my skin with a wash cloth, because I normally wash my face with soap and my hands. The soap had a nice, pungent smell to it too.

In the evening, I applied Pond's Cold Cream. I removed the cream with cotton wool — which was actually rather tricky because it kept sticking to my skin — and I felt lovely and clean afterwards. I did realize however, that due to the instructions of using a new area of "tissue," or in my case cotton wool, to remove the cream, I was using lots of cotton, which felt wasteful.

I was still enjoying how fresh I felt after rubbing my skin with a soapy wash cloth and finishing with a brisk, cold rinse. However, when it came to my nightly cleanse, I tried to use less cotton, which resulted in it becoming more fibrous. When I began removing the cream, the cotton wool fibers started to cling to my face. Afterwards, I gently pulled the fibers off. It was slightly annoying, to say the least.

It may have been a placebo effect, but among all the scrubbing and cleansing, I was beginning to feel like my skin was improving; it felt more moisturized than usual and I felt as if my pimples were improving. Although, I still had the nightly annoyance of picking off cotton wool strands from my creamy face.

I noticed that my skin was beginning to feel a little tight, in particular on my upper cheek area. When I smiled or yawned, my cheeks felt like they were being pulled taut. But I carried on regardless.

I was beginning to realize my predicament. I class my facial skin as combination type skin, because it is oily in some places and dry in others. I was perplexed because my cheeks are usually dry, although they are the worst affected with pimples. However, the upper parts of my cheeks were seriously drying out and feeling tight, whereas the bottom parts of my cheeks remained pimpled. It was as if my cheeks were split into two microcosms that were doing whatever the hell they wanted. I never imagined that my cheeks would feel so oddly uncomfortable.

Nearing the end of this experiment, I followed my routine as normal, but in the evening I wore makeup for the first time all week. I didn't have any residual makeup to remove from the day before, so I used Pond's Cold Cream as a moisturizer before applying my makeup, instead of performing a pre-makeup cleanse. The cream felt nice worn underneath my makeup and my skin felt sufficiently moisturized. Although after a couple of cocktails, it was even more infuriating trying to scrape the cotton wool scraps from my face, while removing my makeup at home.

On the final day, I noticed the dryness that had formed at the top of my cheeks had started to grow downwards, encompassing more of my cheeks. Although I wasn't a big fan of what was happening to my cheeks, I did like how the rest of my skin was looking and feeling. I was relieved to have just one more night left of feeling around my face and neck for cotton wool fibers.

After following a '50s-inspired skin care routine for a week, I felt my skin had more of a natural glow. I believe this "glow" can be explained by constantly removing dead skin cells and dry skin flakes by scrubbing my skin every day with a wash cloth and soap.

Before comparing these "before" and "after" photographs, I would have said that my skin had improved. However, when you look at the evidence, it seems that my skin has stayed the same.

My right cheek appeared the same, if not in worse condition, in terms of pimples.

I don't know if it's just because I can feel it, but I believe that you can see the drying effect this routine has had on my skin; especially in the tight, faint "lines" that have begun to form on my cheeks.

At the end of the day, I really enjoyed how fresh my skin felt during this routine. I'm not sure if the dryness would be just a phase, but it feels uncomfortable enough not to find out. I've had a blast learning all about a 1950s skin care routine, but I don't think it suits my skin, so I won't be continuing with it. On the plus side, I realized that Pond's Cold Cream is a luxe yet light moisturizer, so I might continue using this before I apply makeup.

In the meantime, I shall continue my quest to achieve camera-ready, Marilyn Monroe skin.