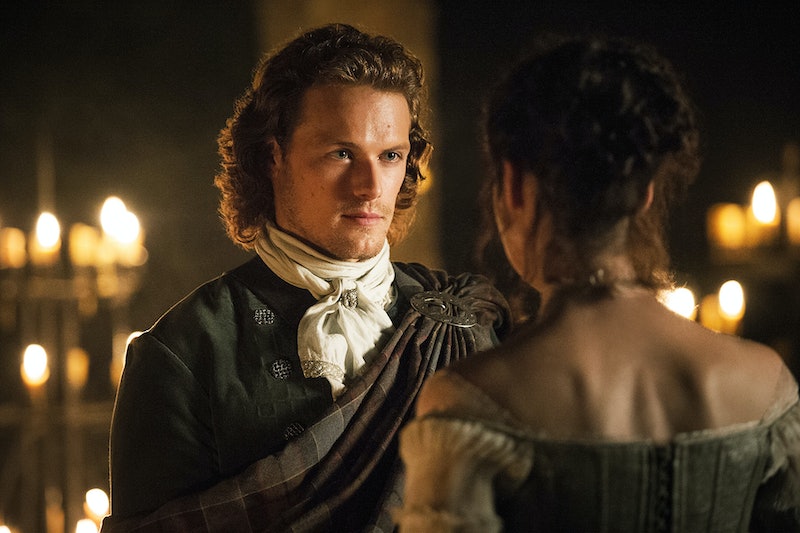 Ten years ago, Finding Fraser's protagonist, Emma Sheridan, first met and fell in love with Jamie Fraser. Yes, that Jamie Fraser. As in, Jamie Fraser from Outlander , the novels by Diana Gabaldon about a British army nurse who time-travels to the 18th century and falls in love with a hotter-than-hell redheaded Scotsman.

One ex-husband and three boyfriends later, Emma is still in love with Jamie. The fact that he's taken (and fictional) hasn't deterred her one bit. Neither the books nor the Starz television show can satiate her craving for some authentic Jamie Fraser — and who can blame her?

Now, staring down her 30th birthday and hoping to find a romance that will rival the one on the pages of Diane Gabaldon's novels, Emma makes a rash decision: she's going to Scotland to find her very own Jamie Fraser, and she's going to blog about the entire process. So she leaves behind her life in the United States and makes the financially unsound choice to hop the pond in the name of true love.

Although we can't blame Emma for her obsession with the undeniably gorgeous Jamie Fraser, she takes it to the next level in this charming novel about looking for love in all the wrong places. It's a must-read for Outlander fans eagerly awaiting their next Jamie fix. I'd also recommend Finding Fraser to anyone looking for a lighthearted summer beach read.

Read an exclusive excerpt from kc dyer's novel Finding Fraser below. The ebook is available for purchase now, and the paperback edition will be available on May 3.

Can you believe it?

I can hardly believe it.

I am HERE. That is to say, alive, and on the ground in Scotland. Tired, cricked-of-neck from sitting frozen with fear for over seven hours on the plane, but with a weird kind of adrenaline-optimism shooting through my veins. I actually made it.

I am sitting in a tea shop in the airport, eating my first Scottish—REAL Scottish—shortbread, and trying to take it all in. The air is alive with wonderful accents, and I don’t know if it’s jet lag talking but I. Just. Feel. Wonderful! I’m sipping bitter tea—just like Murtagh would make it!— and grinning like a fool at everyone who passes.

I’m here. In the land of Jamie Fraser.

I love it already.

Okay, Emma, I quit. I can’t believe you’ve actually gone through with this. There’s no turning back now, you know. No one is going to come rescue you when things go wrong. I can’t imagine your money will last long, so we can talk about this when it runs out. Then we’ll see if you remember my phone number.

Hey, Emma. Used the card you gave me to find your blog. This is quite an adventure you’ve planned! It’s nice to find you online after the odd meeting in Philadelphia, and I’m chuffed to see you’ve made it safely. Looks like I’m following in your footsteps, as I’m now in New York City, en route to heading home myself in a few days. My editor feels the final draft of the project I’m working on needs a fact check, so that’s my next job sorted. Maybe we’ll cross paths again, but anyway, just wanted to say it was lovely to meet you, and I wish you luck.

I’d heard tell of it, but waking at five the day after my flight arrived, I marveled that anything could make such an early riser of me. While no one in the B&B was stirring, I took advantage of the “Wi-Fi-included” option that I hadn’t had the pleasure of enjoying while staying at the American hostels, and read the most recent comments while my tea steeped.

I felt an odd wash of pleasure at seeing Jack’s name. I’d forgotten I’d given him the card. This was followed by a complete wave of embarrassment. The nice journalist or writer or whatever he was who’d rescued me from the mob scene in Philly now knew all about my trip to chase down a fictional character. From his home country, no less.

To make the embarrassment go away, I reread Sophia’s comment five or six times before shutting the lid of my laptop. Nothing like the love and support one gets from family. And, yeah—that was nothing like it. After my trembling-on-the-edge-of-the-abyss love note to her, too!

Standing up, I peered out the window of the tiny room in the Edinburgh bed-and-breakfast house. It was dark as a cell in Wentworth Prison outside, so I was unable to even discern what the weather was like, though I did quickly learn that standing anywhere near the window guaranteed a swirl of icy-cold air around the ankles.

I drew the curtains across the window, counting on the heavy Scots wool to cut the worst of the cold. The heater was cozy, the kettle was efficient, and the lady of the house had even left me a little plaid packet of shortbread. I wasn’t really sure of the era of manufacture of said cookies—or biscuits, as they were called on the package. They might have been made ten years before, for all I knew. The wrapper looked suspiciously old-fashioned.

I ate them anyway. The way I saw it, if they were old, maybe they were time-travel cookies. That had to help on this trip, didn’t it?

The truth was that I had just spent the only night I would be able to afford in such luxurious circumstances, low-season discount notwithstanding. I had survived the flight and my first night in this gloriously brisk and brilliant country, and it was time to put my plan into action.

The one where I was to journey to Scotland, blink my eyes fetchingly, and immediately meet a rugged, red-headed Scotsman who would endure any amount of suffering to remain stalwart at my side.

Reality wrapped its cold fingers around my heart. The actual hard details of how I would find this man, and what I would do next, remained decidedly unclear in my brain. I sighed and leaned back against the wall, my sister’s words echoing in my ears in the predawn light. And hers was not the only voice I heard in the gray of that Edinburgh morning.

Sophia had told me I was an idiot on a wild goose chase. Sharan Stone had been strictly concerned with Faux-Jamie genitalia. And Genesie had been right, at least about Jamie. He was fictional. I knew that. I did.

But I also knew that right up the street was an enormous castle looming over the city. And wild goose chase or not, I could hear it calling my name. I pushed all my doubts aside, gulped the last of my bitter tea, and headed out to find my fate.