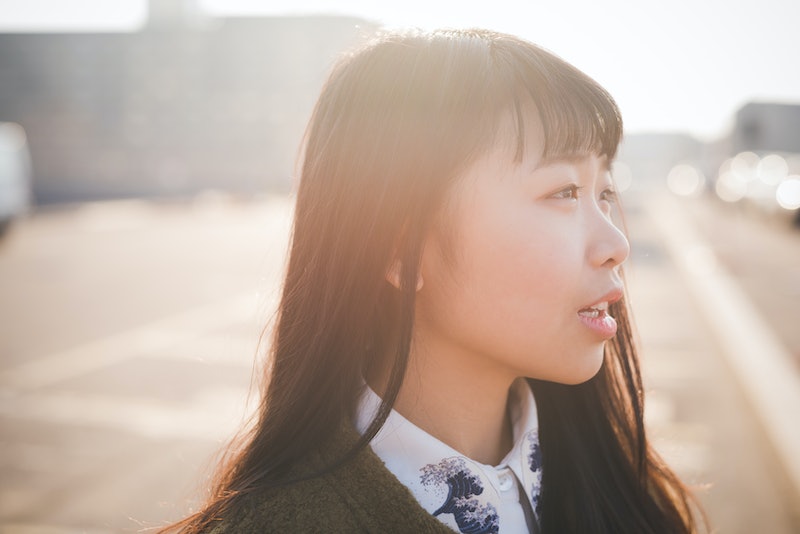 A woman can have a million reasons to decide to give a hard pass to marriage, and it's not fair to question her choice. When you come across a woman who doesn't believe in marriage, there are certain things that you should probably avoiding saying to her. Straight-up, if someone is anti-marriage, they probably have a good reason for it, and who are you to interrogate her about it, nam' sayin'?

I spoke with nine psychologists, life coaches, and other relationship experts about the exact things you should never, ever say to a woman who has decided to sit marriage out, and they were all very clear about what a bad idea it is to cast doubt on a woman's choice (similar to other types of women's choices, and there are lots of them, and it is really, really important to be sensitive on that front — but that's another story).

"Grrr," life coach Kali Rogers tells Bustle. "If a woman has declared that she doesn't believe in marriage, it's wise to believe there is a strong reason behind it," she says. #Truth. Maybe she's not into it because she saw marriage not work out between her parents. "Perhaps she's a child of divorce," Rogers points out. Or maybe she's a divorcée. "Maybe she's tried it once and decided it wasn't for her," Rogers says. "Honestly, it doesn't matter her reasoning. She has declared a belief of hers, and it's not OK to assume it's fickle or flaky." Preach!

2. "You'd Get Married If You Could Find Someone."

3. "You Must Have Some Weird Reason, Right?"

The thing is, sometimes women just do not want to get married. No more, no less. They have their reasons, but they don't owe it to you to explain them. Never say, "Oh, so you have't been able to find the right one?" BetterHelp telehealth counselor and psychologist Nikki Martinez tells Bustle. Even worse, never say, "So — no one has asked?" And the absolute worst, do not, under any circumstances, say, "Is it because you can not kids?" Just let them be. Women who are not planning to get married can be looked at by others as strange, damaged, abnormal, Martinez says, as opposed to just making a choice that is right for them. Indeed.

4. "You'll Wish You Were Married When You're Older."

Never tell a woman in this case, "You'll regret it when you're older and will want someone to grow old with," certified relationship coach Rosalind Sedacca tells Bustle. "There are no guarantees in life, and choosing marriage so you have a partner to age with shouldn't be the motivation for making that commitment," she says. "Life doesn't always work out like we planned," she points out. "Make your choices based on your desires, needs and goals. Not as a possible insurance policy far into the future." Yaaas, queen.

"Whatever you do," relationship coach and psychic medium Cindi Sansone-Braff, author of Why Good People Can't Leave Bad Relationships , tells Bustle, "Don't tell her this: 'You're going to die alone, and not be found until weeks later, when your nosy neighbors call the police to report a stench coming from your place.'" Yeah, definitely don't say that. "Then, when the police knock down your door, they're going to find your old, decrepit, decomposing body being eaten by your entire-rescue-feral-cat colony," she says. Oh. My. God. Yup, she called it: You should not say this. "This kind of cliché mortality tale drives women crazy, particularly single, successful, happy women who just happen to love living alone with their cats," she says. Yay, cat ladies!

To a woman who doesn't want to get married, don't say, "Do you want to get married?" Marina Sbrochi, IPPY award-winning author of Stop Looking for a Husband: Find the Love of Your Life jokes to Bustle. "OK, seriously, don’t ask her to marry you," she says. "But I think it’s fair game to ask her why she doesn’t believe in marriage." Just don't pop the question.

Never ask, "What if you regret it someday?" Janet Zinn, a New York City–based couples therapist, tells Bustle. "This is something not to say since the decision is about how they feel now, and making a decision for what might be is disrespectful and negates their decision." Just let them be. If they change their mind later, so be it. It's not up to you.

"It gets harder to find [someone] over the age of 35," Dr. Ramani Durvasula, author of Should I Stay or Should I Go: Surviving a Relationship With A Narcissist , tells Bustle. Echoing Sedacca, you should also never say, "You may regret this" she says. Also, never say, "Are you sure?" she says.

In fact, she has a whole laundry list of things never to say to a woman who doesn't want to get married, including, "Don't you want a family?"; "How will you support yourself?"; "Aren't you afraid of dying alone?"; and "It's tough out there, isn't it?" Basically, let them be them. "It takes tremendous audacity to second guess someone's life decisions, but lots of people have poor boundaries," she says. Don't let that be you.

"I think that anything that is disrespectful should always be refrained from expressing," zen psychotherapist and neuromarketing strategist Michele Paiva tells Bustle. "Live and let live."