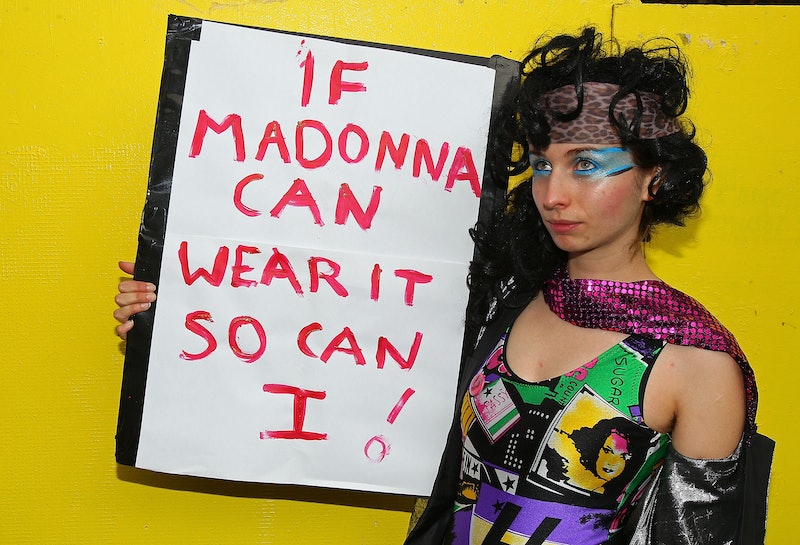 One criticism of feminism I often hear is that it forces rebellious, non-conforming behavior down women's throats. What about women who want to perform the role expected of them? I and most feminists would say that's A-OK. There are plenty things women should be able to do, but they shouldn't have to — because telling women what to do would kind of defeat the purpose of feminism, right? Women are expected to do way too much to begin with.

Feminism is all about giving everyone the freedom to make whatever choices they wish without judgment, whether those decisions jive with gender roles or not. Often, it focuses on people's right to make choices that are less socially accepted — like women's right to be aggressive and men's right to be sensitive — because the ability to do the opposite is already taken for granted. But when feminists don't make it clear that these behaviors are options, not mandates, more gender-conforming people can feel excluded from feminism.

So, here are some things I and most feminists think women should absolutely be able to do if they wish but should never feel pressured into. No shame either way.

There are a lot of great things about gaining fulfillment from your career, especially if you're a woman who has been taught to deprioritize it to start a family. Work can give you a sense of worth that does not depend on any other person and a sense of accomplishment that improves your confidence.

Work, though, can also lead to stress, be unfulfilling (depending on the job), and be devoid of the loving relationships many people crave. Family, similarly, can be a source of both stress and fulfillment. So, there are many reasons why people of any gender might choose to prioritize work or family.

In the United States right now, more women than men are the primary caregivers in their families, according to the American Psychological Association. Though a recent Pew Research analysis found that four in 10 women are now the primary breadwinners, this reflects women playing both roles simultaneously more than a complete shift.

There's nothing inherently wrong with a household with a female caregiver and male breadwinner, but larger country-wide patterns reveal a cultural expectation to uphold this family model, which becomes problematic when men have more freedom to choose their careers and women have more freedom to choose their families. It's worth looking at what forces are behind the decision to prioritize work or family, but that doesn't make any individual's choice less understandable.

2. Have Whatever Body They Have

The body-positive and fat-positive movements have proclaimed women's right to have a size or shape that does not fit the thin ideal we see in the media. And that's great! But sometimes, sayings like "real women have curves" and "my anaconda don't want none unless you've got buns" shame women for being thin or not having the "curves" all men are supposedly attracted to.

Removing pressure to be thin is one way of dismantling cultural norms that dictate women are only worthy if they look a certain way. But replacing one ideal with another only furthers this problem. Better yet would be to tell women they don't have to be beautiful by any definition of beauty because their intellect and character are what's important.

As this comic by cartoonist Dan Shive demonstrates, breaking the double-standard for toplessness — which the #freethenipple movement has recently brought attention to — is really, really complicated. On the one hand, this double-standard is culturally specific and stems from the sexualization of women's bodies. It can be empowering to do something that's normally sexualized, like go topless, and have it mean nothing other than what it means to you.

On the other hand, women's bodies are routinely objectified and considered men's property, and this sexualization is no more evident than in depictions of and reactions to women's breasts. Any attention called to a woman's chest can feel super degrading to some women.

So, once again, this decision — or any decision about what to wear — comes down to how it makes each individual woman feel. Some women might feel more confident when they dress provocatively and find it freeing to do so while knowing it is not an invitation. Others may have a difficult time dissociating revealing clothing from all the cultural meanings attached to it. Women who feel this way should never feel pressure to wear or reveal anything they don't want to.

4. Have Many Sexual Partners

As Amber Rose's Walk of No Shame video demonstrates, we have a double-standard for how sexual men and women are allowed to be, which is reflected in terms like "walk of shame" and "slut." A man is considered lucky when he has casual sex or sex with lots of partners, while a woman is assumed to have been taken advantage of. That's B.S.

But the fact that judging women for having many sexual partners is B.S. doesn't mean any woman should have many sexual partners. Some people are more drawn to monogamous relationships and hold off on sex so they don't get too attached too early. Women and men who prefer to get to know people before sleeping with them shouldn't be judged any more than women who have casual sex should. Similarly, asexual people are no less empowered for not seeking out sex.

We tend to penalize women for assertively speaking their minds, yet we also chastise them for being too apologetic, too polite, and too feminine. It's important for women to acknowledge their right to assert what they want at work, in relationships, or anywhere, and not feel guilty about it. At the same time, though, women shouldn't have to act "masculine" to be taken seriously.

Since women are damned if they do and damned if they don't when it comes to the way they speak, it's not worth it to try to please people with our speech habits. We'd might as well just be ourselves and do what makes us feel most comfortable and powerful, whatever that is.