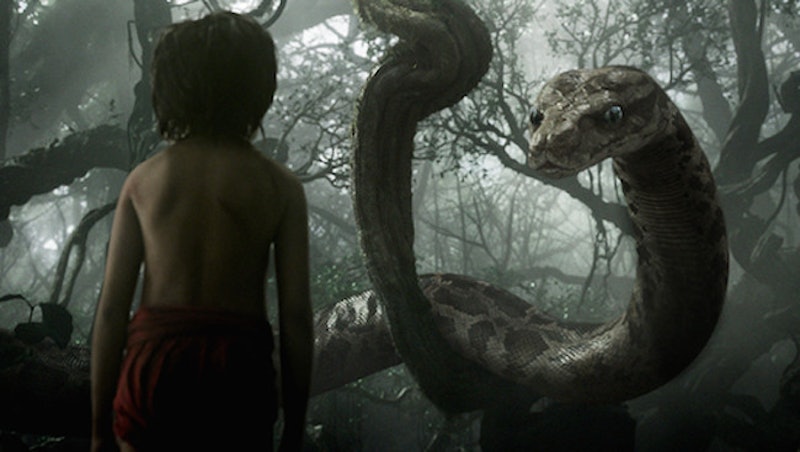 Everybody knows The Jungle Book. The 1967 Disney animated classic is one of the most fun and beloved films ever produced by the studio; with great songs, wonderful animation, and memorable characters. It was one of my favorites growing up, and I know I'm not alone in that regard. So of course a lot of people are excited for the new live action/CGI remake, which drops a real human Mowgli into an incredibly realistic computer-generated world filled with photo-real animals. But after viewing the trailer for the new film, I have to say that the tone seems much darker than the original. So, is The Jungle Book scary?

That probably depends upon your age. I think it's safe to say that not many adults are going to be frightened by this new incarnation of The Jungle Book. It is, after all, a PG-rated movie starring a 12-year-old and a bunch of talking animals. However, the possibility for young children to be scared is definitely real. Some of the animals can be pretty frightening, especially given how lifelike they look. Sher Khan the tiger trying to eat Mowgli, Kaa the python trying to weirdly seduce him, and especially the enormous King Louie, a Gigantopithicus here rather than an orangutan, chasing after him, are all moments in the trailer alone that could end up frightening younger viewers.

There's also the issue of the 3D effects. The Jungle Book is being praised for its impressive 3D work, and that includes animals leaping off the screen toward the audience. It is for this reason that India's Censor Board Of Film Certification granted the film a UA rating, meaning that kids can't see the film without adult accompaniment. "The 3D effects are so scary that the animals seem to jump right at the audience," Censor Chief Pahlaj Nihalani told DNA India. "In Jungle Book the jungle animals jumping at the audience in 3D is startling. It's up to parents to decide how much of these effects are suited for their children."

So some aspects of the film definitely have the potential to scare the little ones, but is there anything about the movie that could frighten adults? One detail about the movie that may at least disturb grown ups, if not downright frighten them, is the phenomenon known as the uncanny valley. This term refers to something that looks almost human but not quite, and the resulting revulsion it causes in some people who see it. Granted, the animals don't exactly look human in the film, but they do express human-like facial expressions and they talk — with giant Louie coming the closest in appearance to a human, and again coming out on top as the scariest.

So some kids might be a little scared of The Jungle Book, and some adults might get a little creeped out by it, but overall I think the movie will be safe for everyone to watch. I mean, it features a Bill Murray-voiced singing bear, how bad could it be?

More like this
The ‘Squid Game’ Season 2 Renewal Teases A Creepy New Figure & A Return
By Brian Anthony Hernandez and Bustle Editors
Sadly, You Can’t Stream 'Elvis' — Yet
By Morgan Leigh Davies
Photos Of The 'Elvis' Cast vs. Their IRL Counterparts Will Have You All Shook Up
By Grace Wehniainen
Chris Hemsworth Joked That Baring His Butt In ‘Thor: Love And Thunder’ Was A “Dream”
By Brad Witter
Get Even More From Bustle — Sign Up For The Newsletter