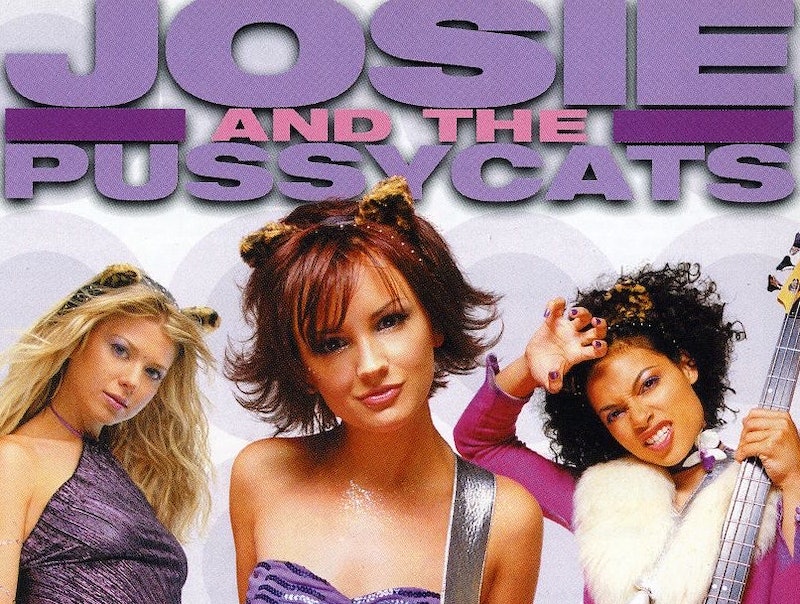 Were you a "punk rock prom queen"? When Josie and the Pussycats was released 15 years ago, I definitely wanted to be one just like Josie, Valerie, and Melody, who defined that glittery title. Although I'd typically be irked that main actress Rachael Leigh Cook's voice wasn't heard singing "3 Small Words" on the Josie and the Pussycats soundtrack, something about the kitschiness of the 2001 film — and the awesomeness of the soundtrack — allowed me to overlook it.

Once I was old enough to drive, I bought the soundtrack on cassette tape, which was outdated even for the 2000s, and would blast it from my 1991 junkie car (thus, the reason for the cassette), singing along to songs like "3 Small Words," "You're A Star," and "Spin Around." Because even if the movie Josie and Pussycats may be debatably bad, the soundtrack is still good after all these years.

Although the film received less than stellar reviews (a fact that will never not confound me — JK, I kind of get it, but still ... the movie is so funny, empowering, and smart), I'd like to think the Josie and the Pussycats soundtrack is something we can all agree upon. If you haven't listened to it since the early aughts, dust off your CD and pop that baby into your Discman since that's almost the only way you can listen to it as it's not available to download on iTunes or stream through Spotify. If you blasphemously got rid of your CD though, you can still buy it on Amazon or do the Pussycats proud by getting tricky and listening to single tracks on YouTube... they weren't into consumerism anyway.

I prompt you to listen to the music from Josie and the Pussycats now because I think most people who loved the movie will be pleasantly surprised by how well the soundtrack holds up after a decade and a half. Of course, the nostalgia factor helps, but the pop-rock soundtrack led by Letters to Cleo's Kay Hanley (ya know, the band that performed on the roof in 10 Things I Hate About You) doesn't even need to be associated with the film or the year 2001 to be enjoyed in 2016. And a lot of that has to do with the stellar crew of musicians who contributed to the album.

The A.V. Club praised the Josie and the Pussycats soundtrack in June 2015, citing the talented crew who helped assemble the album. The movie very smartly had Kenneth "Babyface" Edmonds produce the soundtrack and it had contributions from musicians like Adam Duritz of Counting Crows, Adam Schlesinger of Fountains Of Wayne (who also memorably wrote the catchiest song in all of movie history — "That Thing You Do"), and Jane Wiedlin of that little-known all-female group The Go-Go's. Their songwriting mixed with Hanley's sweet-sounding punk vocals — not to mention, she also contributed some songwriting — made for great original songs for Cook, Rosario Dawson, and Tara Reid to lip-synch to.

That's not even mentioning the non-original music of the oft-covered songs "Money (That's What I Want)" and "Real Wild Child" and the hilarious and spot-on boy band music written for the movie's other band, DuJour. (Oh, "Backdoor Lover," how I hardly understood thee.) Every song on the album could have been a bonafide hit when the film came out in 2001, and some even today — particularly my favorite "Pretend To Be Nice." All of the music by the "band" Josie and the Pussycats had a comprehensive sound that was believable based on the girls' roots and musical sensibilities presented in the movie, even if it wouldn't have fit with the original sound of the band since they were introduced to the Archie comic book world in 1963. But the movie version took place in 2001 — not the 1960s — so my only qualm with the soundtrack is that it didn't tap into Dawson's fabulous vocals since I am pretty obsessed with her singing voice.

While sometimes I think it might be harder to write a fictional pop hit than an actual one (ahem, looking at you Lost 's "You All Everybody" by Drive Shaft), the Josie and the Pussycats soundtrack proved that with skilled songwriting, vocals, and producing, fake bands can be just as good as real bands. Now, excuse me as I lament the fact that the days of me ever becoming a "punk rock prom queen" are truly over.