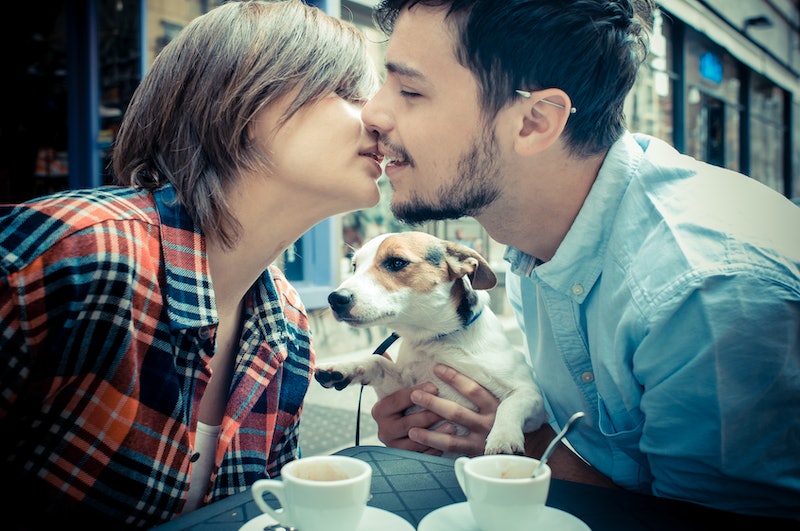 If you’ve been under the impression that only opposites attract, then it's time to re-think everything. According to a new study by various research institutions in Germany, we are attracted to people who are similar to us, as opposed to someone who is our opposite. We inherently want someone so much like us, that we’re even attracted to people who look like us or family members. Yes, your partner actually might look just like your mom, but you also might just be in severe denial about it.

Despite the whole “opposites attract” thing, this isn’t the first time that science has found that we pretty much just want to date ourselves (although, honestly, we all end up becoming just like our partner eventually anyway). Here are five other findings that support the idea we just want to be with the one we love most: Us.

1. People Are Attracted To Those Who Share Their Personality Type

According to a study by researchers at Wellesley College in Massachusetts and the University of Kansas, when it comes to romantic relationships and friendships, people are attracted to those who have very similar personalities. The study of 1,523 couples found that, when asked to fill out a survey regarding their personality traits, the couples had a similarity rate of 86 percent.

It was also found that those who are on the same page about pretty much everything, have a higher relationship success rate. As someone who firmly believes that when it comes to love you want to find someone who shares your brand of crazy, I’m not surprised one bit. You need someone who’s going to laugh at your poop jokes and have a bunch of poop jokes of their own.

2. Attraction To People Like Us Is Based On Realizing That People Don’t Change

The same study also found that most of us, even if we don’t realize it, know that most people are incapable of change, so that’s why we go for those who are compatible with what we need now and will need in the future.

As the study’s author, Dr. Angela Bahns told Medical Daily, the realization that people are rarely capable of change and that lack of change can lead to problems down the road, the safe bet is to go for the one most like you from the start. Bahns reiterated that opposites attract thinking is wrong, because of this “psychological default," as she calls it.

3. We’re Attracted To Those Who Have Similar DNA

A 2014 study by the University of Colorado found that when we’re looking for a long-term partner, we go for those who have DNA very similar to our own. This is called “genetic assertive mating.” Married couples, according to the study, have far similar DNA than if you randomly chose two strangers on the street. Basically, we can almost sniff out that DNA, make a beeline for it, and end up with someone just like us.

4. We Tend To Gravitate Toward Those Who Share Our Level Of Education

Known as “educational assertive mating,” the same 2014 study found that not only do we go for those with similar DNA and personality traits, but we’re also drawn to those who share our education level. Although “genetic assertive mating,” is more common, those who are attracted to people who are equal to them in education is definitely still common, which is a shame. Just because someone didn’t go to college and you hold a Ph.D., it doesn’t mean that love can't happen.

5. We’re Attracted To Those Who Look Like Us (Or A Family Member)

When my parents first met my last partner, the man I married, they were floored by how much he looked just like my grandfather when my grandfather was his age. Although I was only three when my grandfather died and never knew him in his 30s and 40s, I was, at least according to science, inherently attracted to Olivier because he looked familiar to me. A 2010 report published in Personality and Social Psychology Bulletin found that not only are we attracted to people who resemble family members, but when the subjects who participated in the study were shown photos of strangers and photos of themselves morphed with photos of those strangers, they were more attracted to the photos in which their faces had been morphed.Takeaway? You've got it bad... for yourself.

More like this
12 Active Date Ideas That'll Get You & Your Boo Outside
By Lexi Inks
50 Valentine’s Day Instagram Captions To Post If You’re Single
By Jessica Booth, Lexi Inks and Carolyn Steber
TikTok's Voluntary Celibacy Trend Has Sparked A Movement
By Lexi Inks
18 Hinge Prompt Answers To Try If You’re Looking For Something Casual
By Lexi Inks
Get Even More From Bustle — Sign Up For The Newsletter
From hair trends to relationship advice, our daily newsletter has everything you need to sound like a person who’s on TikTok, even if you aren’t.