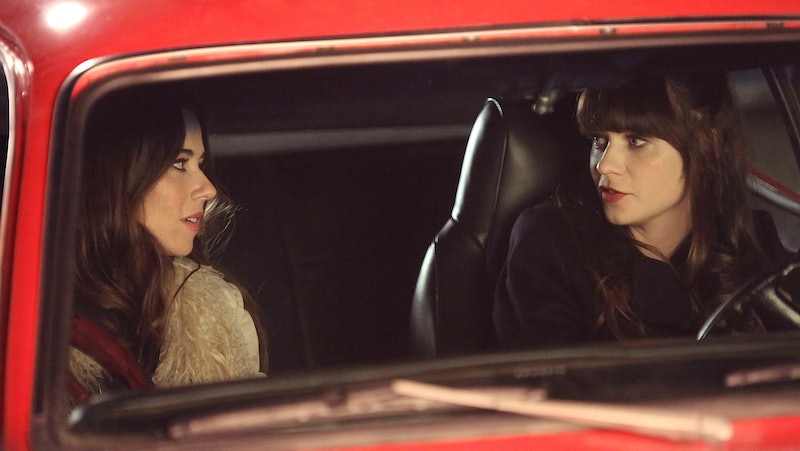 After Tuesday night's new episode of New Girl, we've formulated an idea that we think might finally stabilize the show a bit: it's time for Coach to hit road and for Abby Day to move in. With all the flip-flopping and general unevenness playing out in the current season of the Fox comedy darling, we think a better path for the series to walk down involves the comedic stylings of a one Linda Cardellini, who played Abby in Tuesday night's new New Girl episode, "Sisters." So we've cobbled together a few reasons why we're ready for a bit of sister-sister shenanigans on the series.

Coach Is Still an Afterthought

Sure, he's still relatively new in his return to the series, but the show has had a hard time figuring out Coach and his storylines. Which, subsequently, make them feel very arbitrary. Now that dating CeCe seems to be out of the picture, where else can he go? As it stands, Coach feels like a stand-in that the series throws into the mix when convenient for the other character's story arcs. And nobody likes that.

It Would Even the Playing Field

As it stands, for a show with the word "girl" in the title, there are very, very few on this show. And while that was all well and good, premise-wise, in the beginning — the lack of ladies has now become more annoying than anything else. Does the series not know how to consistently write women beyond "hot model girl" and "dorky awkward geeky girl" tropes? And while they can bring in guest stars from time to time under the context of "potential girlfriend," that still regulates any genuine female stories to the sidelines, and only in relation to the men around them. Perhaps this is the post-Frozen world we've entered, but it's time to let it go.

It's a New (and Much Needed) Female Perspective

Maybe this is just me, as a woman that still feels like she's very much a mess, but there aren't nearly enough portrayals of disaster-ladies on television that aren't alienating (cough cough Girls) to a lot of people. Instead of focusing on how Jess interacts with all the men in her life — is every week going to be about Jess and Nick's relationship? Seriously? — how about with a woman? One that she clearly has a very complicated relationship with? Friendship stuff with CeCe is great, but it's a fair assumption that many of the series' viewers could also relate to the trials and comedic tribulations that come with sibling relationships as they slowly teeter into adulthood.

Instead of manufacturing conflict out of silly scenarios (though we love that in good measure — don't get it twisted), adding Abby to the fold would create some real, honest-to-goodness and genuine-feeling conflict to play around in. Jess has always, more or less, been "in control" of how people see her in the house (and subsequently on the show), by throwing her sister into the mix, a new point of view and way into Jess' character reveals itself. Especially because Jess and Abby are such fundamental opposites.

Now, the show doesn't have to get rid of Coach forever-ever (we've a soft spot in our hearts for Damon Wayans Jr, too), but perhaps he can just recur. Or move in with Schmidt (he does have that spare room, after all). Either way, we're all for a new member of House Day being brought into the fold — especially when it involves Cardellini doing comedy, since she's basically the drama darling of the moment.