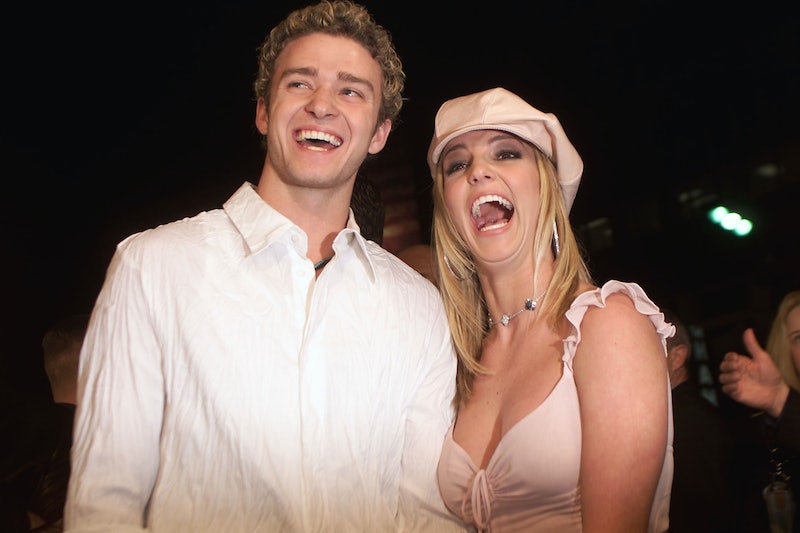 The years 2000 to 2003 are honorary years of the '90s. You're sitting there suddenly nodding and thinking "Oh my God, yes, I never thought of it like that before!" aren't you? Because we're spitting truth bombs in here today, and nothing is realer than realizing the '90s continued on for four years after the actual '90s ended. The '90s is a state of mind, not a number of years. We could totally have a '90s renaissance now, if everyone was really serious about getting behind it. Between 2000-3, everyone was already in '90s mode, so it didn't require much conscious effort. We just continued behaving the way we had behaving for the past decade.

Acknowledging that the'90s wasn't just confined to the years 1990 to 1999 is important, because you can't really get the full import of the '90s without including the subsequent first four years of the new Millennium. We thought everything was going to change when the clock struck midnight and thrust us into the year 2000, but really, more than we bargained for stayed exactly the same. It was really, really hard to end the '90s. It's was like having to walk out of a relationship while you're still in love because suddenly you find yourself with different priorities. You don't want to do it, but you know it's for the best in the long term. Here are some reasons by the years 2000-3 are the honorary years of the '90s.

1. Because It Always Takes A Few Years Of Being Hungover To Get Over A Decade

There was a reason everyone still had frizzy bangs and shoulder pads in 1991. That was our '80s hangover. And the '90s were so much more potent than the '80s simply because they were cooler. It's hard to move on from that. So 2000-3 were our hangover years, when we were still slightly drunk on the '90s and trying to move on but not being able to quite muster shaking it off entirely.

2. Because We Still Had Matching Outfits

Britney and Justin wore their double denim matching outfits to the AMAs in 2001. Destiny's Child were at peak matching outfit. Considering this is a pop fashion trend we very much associate with the '90s, it's only appropriate that we consider the years after the '90s in which the trend was continued to be honorary years of the '90s.

3. Because We Were Still In The Golden Era Of Pop

4. Because Everyone Was Still Very Sincere About How Silly They Looked

No one was trying to be fashionable the way they are now. People were really still very sincere about their hipster jeans and scarf tops. It was the same sincerity we had in the '90s. Being cool wasn't $150 plain white t-shirt and a Kylie Jenner lip kit. It was a fedora with diamantes on it. And we meant it.

5. Because Midriffs Were Still The Body Part Du Jour

As long as the midriff ruled (and not the part you see now that's just the ribs, I'm talking public bone all the way to up under one's breasts), it was still technically the '90s.

6. Because Technology Was Still Kind Of Crappy

Eras can be defined by technology. In the early oughts we still didn't really "get" the internet and most of us still had bring pink Samsung flip phones. Sounds like the '90s to me! The Millennium was supposed to change technology forever, but it didn't do much of anything, really.

7. Because We Hadn't Quite Been Fully Afflicted By "Boho" Yet

It officially became the oughts when boho-mania kicked it. There were whispers of boho in 2003, but the trend didn't really kick of until 2004, and was in full swing in 2005 with Sienna Miller, Kate Moss and the Olsen Twins making folks-y skirts and chandelier earrings chic. Boho officially took us out of the '90s, being the first really definably fashion trend of the oughts.

8. Because Friends Was Still On The Air

If we define the '90s by our favorite show, then we have to compensate up until 2004, actually, to account for all the years of the honorary '90s that Friends was on the air.

9. Because We Look Back At That Time With The Same Warm Fuzzy Nostalgia We Have For The '90s

I'm sure when you're having conversations about the '90s, without even realizing, some of the cultural references you draw in are from the early oughts. Whether a song, an outfit someone wore on the red carpet, or the kind of stuff you were doing on the day-to-day, chances are you look back on 2000-3 as seamless with the '90s, and when you're being nostalgic, that nostalgia extends easily to those years.

The years 2000-3 were too good for the oughts. They were so brilliant there's no other way to categorize them than as part of the amazing '90s era.

When you're doing something good, you never want to stop. That's why the '90s bled out of itself and into the early oughts. Because everyone was having such a great time in the '90s it follows they were reluctant to end it. And so we look back on 2000-3 as the honorary years of the '90s.