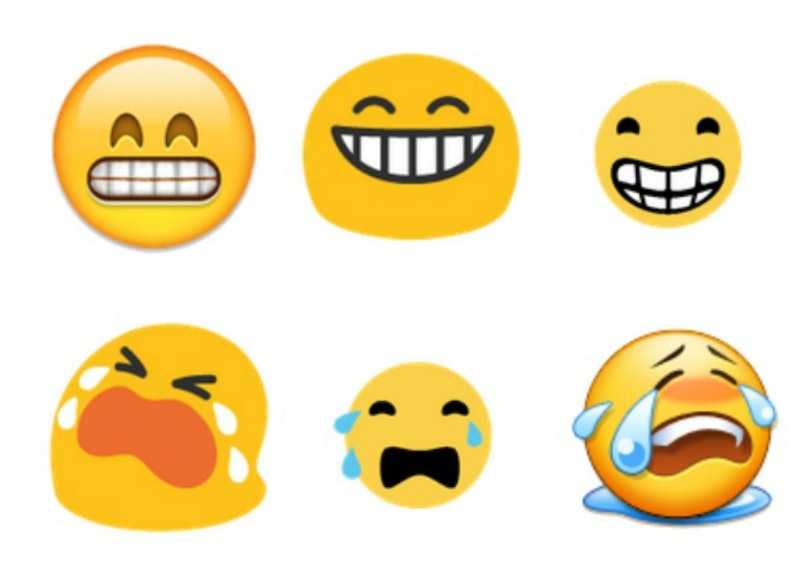 Somewhat unfortunate news for anyone who relies on emoji as their primary text-based form of communication: According to a new study, it’s incredibly easy to misunderstand emoji, particularly if you’re looking at them from a cross-platform perspective. What that means is that if you have an iPhone, but your best buddy has an Android device, the emoji you send might not look at all the same as the emoji they receive based on the different ways each device displays those ubiquitous little images. This is perhaps unsurprising, given the way emoji creation works (that is, Unicode decides which emoji are in the set, but then each developer is responsible for designing how they’ll appear on their devices) — but the one thing we may have been failing to take into consideration is that we’re not just talking about a basic difference in appearance. We’re talking about a difference in interpretation. That is, we're all speaking emoji... but we're not all necessarily speaking the same emoji.

A study conducted by the GroupLens research lab at the University of Minnesota unearthed this fascinating quirk of human communication; their paper on the subject is set to be published in AAAI ICWSM in May, but it’s available to read online now. And it’s definitely worth it — given that emoji have become not only an integral part of our language, but also a language in and of themselves, we owe it to ourselves to understand how they work. I mean, I realize that emoji seem kind of inconsequential in the grand scheme of things, but language matters — it shapes how we process the world. So as goofy as these little pictograms might seem, they’re more important than you think.

Here’s how the study breaks down:

First things first: If you’re going to examine emoji usage, you need some specific emoji on which to focus. To narrow down the field, the GroupLens researchers used a data set of about 100 million random tweets to determine the 25 most popular anthropomorphic emoji — that is, the ones that look human-like. Why anthropomorphic? Because the researchers “hypothesized that misconstrual would be more likely among these emoji than those that characterized ‘things’ (e.g., an airplane, a balloon, flowers, flags, etc.).” This makes sense; after all, while it can sometimes be difficult to decode body language, an airplane is an airplane is an airplane.

Next, the researchers needed some platforms on which to view those emoji, so they went with the top three smartphone platforms according to reports from comScore released in 2015: Android, Apple, and Microsoft. Worth noting, though, is that while Apple and Microsoft emoji look the same on all Apple and Microsoft devices, Android emoji look different depending on which manufacturer made the device — so, on top of putting the Google emoji into the mix, the researchers chose two of the most prominent Android manufacturers and took a look at the emoji sets for each: Samsung and LG. All in all, the researchers examined five different sets of emoji: Those displayed on Apple, Microsoft, Samsung, LG, and Google devices. This means that, between the 25 emoji and five platforms, the total emoji data set consisted of 125 different emoji renderings.

The study’s 304 participants were recruited via Amazon Mechanical Turk. Each participant was given a random selection of 15 of those 125 emoji renderings to interpret, resulting in a total of 4,560 emoji interpretations (about 37 interpretations for each emoji). It was discovered after the participants interpreted the emoji that an error in labeling resulted in incomplete data for three of the 25 emoji — “pensive face,” “flushed face,” and “smiling face with open mouth and smiling eyes” — so ultimately, the researchers were looking at around 4,449 interpretations of 22 emoji for their final analysis.

Here’s where it starts to get really interesting: The act of interpreting the emoji consisted of the participants ranking each one according to the emotional meaning or sentiment on a scale of negative five to five. A ranking of negative five meant the emoji was interpreted as “strongly negative”; a ranking of zero meant that it was “neutral”; and a ranking of five meant that it was “strongly positive.”

So what gives? Why are we all looking at the same thing and seeing something different? Well, it’s both easy to explain and extremely difficult to explain, depending on the angle from which you’re approaching the issue. As researcher Loren Terveen said to the Daily Dot, the cross-platform confusion can be viewed as a translation problem. “I might say a sentence in one language and it gets translated to another, and nuance may be lost and people may be confused. The same thing is true here,” said Terveen. “I see one emoji rendering, you on your phone may see a different rendering. I don’t know it, and I don’t know exactly what you see.”

But that doesn’t explain the wildly different interpretations people may have of the same emoji on the same platform. It’s not really a translation issue then; it’s more of a reading comprehension issue. Trouble is, with something as subjective as a facial expression, it’s hard to pin down one, solid definition — I mean, we even have a tendency to call the same emoji by different names, regardless as to what the official Unicode title is.

In any event, here are five of the most widely misconstrued emoji between platforms, displayed from left to right as follows: Apple, Google, Microsoft, Samsung, and LG. The full paper is available here; I suggest reading it whenever you get a chance, because it’s absolutely fascinating.

Not going to lie: The Apple version of this one looks like it’s grimacing to me.

2. Face With Tears Of Joy

Ah, the good ol’ “Word” of the Year. I can’t help but feel that the Samsung rendering is more embarrassed than amused.

I’m actually kind of surprised by this one; to me, they all look like they’re conveying more or less the same feeling. Apparently I would have been the outlier in the data set, though.

Is it just me, or does the LG one look really, really angry?

Another one that surprised me, I would assume that the “ZZZZs” over each emoji’s head was sort of the universal symbol for “sleeping.” Guess not. Maybe it’s the Z-less Microsoft one that’s throwing people off.

More like this
Memes Inspired By The Popular BeReal App Are Going Viral
By Emma Carey
The 'If I Text You This, It Means' Emoji Meme On Twitter, Explained
By Natalia Perez-Gonzalez
The Women’s Super League Just Made Gaming History
By Sophie McEvoy
9 Funny Instagram Locations To Use On Your Next Post
By Siena Gagliano
Get Even More From Bustle — Sign Up For The Newsletter