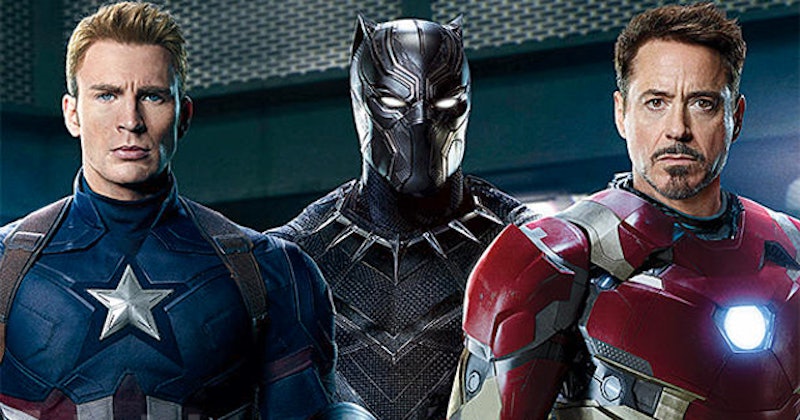 While I wait impatiently for the new Wonder Woman movie and keep up with my favorite feminist comics, I'm also getting excited for the introduction of Marvel's Black Panther in Captain America: Civil War. While it's still unclear if Black Panther will pick the side of Captain America or Iron Man, his presence in the film has already stirred up a lot of other speculation about the role that the hero, a.k.a. Prince T'Challa, has in this franchise. But because this character marks the first major black character in a Marvel film, lots of newer fans might not know much about him — including if his home country, Wakanda, is a real place.

For those unfamiliar with the character of Black Panther and African geography, it's worth noting that the hero's home country, Wakanada, is not an actual place you can find on a map. Instead, Black Panther's fictional home pulls from a variety of different true histories and Afrofuturism which, as Bustle's own Sadie L. Trombetta noted, "is a combination of fantasy, history, science fiction, and magical realism as a means of examining the plight of people of color, past and present."

In the Marvel universe, Black Panther serves a religious and governmental leader of his planet, and it's no surprise that a character named after one of the most important black movements of the past century hails from a home that never knew the violence of racism. It's a radical and wonderful idea to visualize. As ComicsAlliance noted, "Black Panther and his homeland of Wakanda may be Hollywood’s first blockbuster foray into Afrofuturism, challenging audiences to see a cast of all-African characters who aren’t defined by crime and subservience, but instead by pride and excellence."

Of course, the fact that Wakanda is not a real place hasn't stopped Marvel fans of color from organizing online and displaying their fandom in all of its nerdy glory. We Are Wakanda over on Tumblr is a curated collection of fan art and geekery devoted to Black Panther and other black superheroes, and it's far from the only blog to be honoring the triumphs the comic world is making. Here's hoping that as more Marvel and DC movies are released, there's reason for the celebrations to continue.