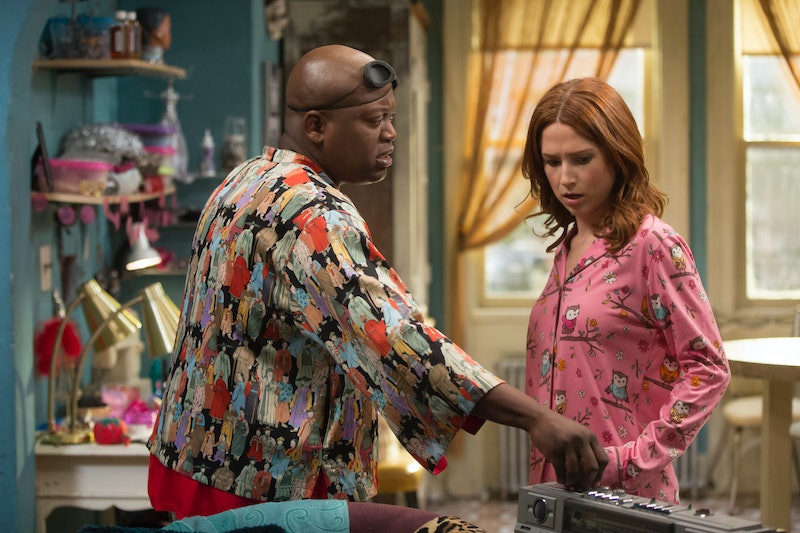 The Unbreakable Kimmy Schmidt struggle is very real. It's oh so tempting to watch an entire season of the Ellie Kemper sitcom in one day. But, the show is so dense with jokes and references that sometimes they can get lost in the haze of a marathon viewing. Episode 9 of Unbreakable Kimmy Schmidt featured a joke that went all the way through the closing credits. "Kimmy Meets A Drunk Lady!" ends with a dedication to someone named Art Smelly. Before the full credits roll, a title card reads "In Memory Of Art Smelly, 1932 - 2015." But, the deceased isn't an actor's family member or a friend of the production. Despite having a truly fantastic name, Art Smelly is not a real person. He's a running gag.

Another running gag of the show is that Titus and Kimmy don't have enough money for the latest technology or gadgets. (Or professional silverfish extermination.) In fact, they still listen to their music on cassette tape and probably think Apple Music is something you might hear at an orchard. In "Kimmy Meets A Drunk Lady!," an apartment battle threatens to erupt between the two because there is only one slot left in their cherished cassette tower. And, Kimmy need at least three more for her four-tape compilation of sort-of familiar pop songs, Now That Sounds Like Music! which features "music inspired by but legally different than the music you love."

The royalty-free mixtapes become a fixture in the episode, with titles and artists sometimes appearing at the bottom left of the screen like they would in a music video. When she's getting ready for work, Kimmy belts a Katrina And The Waves knock-off called "Hikin' On Sunshine," much to Titus's annoyance. Dusk Mountie's "Brother Baptist" inspires Titus to take some action with its approximation of the stirring '80s hair band ballad "Sister Christian" featuring spoof lyrics like, "When the drums kick in, it all will change for you."

Tragically, Titus' attempt to build a tape tower himself is a big, fat failure. He even breaks his cassingle copy of R. Kelly's hit "I Believe I Can Fly" while he's trying to force it into his wood and glue monstrosity. (This is why you can't trust a Fruit By The Foot as an accurate standard of measurement.) Fortunately someone discarded an old tape tower in the dump Titus roots through. Unfortunately, the tower can't bring back Titus' lost cassette, though Kimmy has a replacement that's "just as good if you don't listen too hard."

Art Smelly is (was) the artist behind "I'm Convinced I Can Swim," the lead track off the soundtrack of the little-seen movie masterpiece Earth Jelly. I'm impressed that an aspiring R&B singer who would have been 83 when he died took so well to the auto-tune trend. But, Smelly's take on R. Kelly's motivational anthem could give anyone the confidence of a would-be swimmer who has never seen a pool, but is "pretty sure" that he has a fin. (Get it? R. Kelly, aka Art Smelly?)

"I Believe I Can Swim" is a silly parody song created for the show, but it fits Kimmy and Titus so well. They don't size themselves up against the rest of the world; they celebrate when they reach their own goals, even if they're as outwardly minor as getting off the couch. And, this episode marks a huge milestone for Kimmy; she decides to go to therapy to work through the issues stemming from her time in the bunker and before. Asking for help is a massive step, especially for someone who strives to be so consistently positive.

So, Art Smelly, you deserve this episode dedication for motivating these two lovable characters. May you rest in peace.