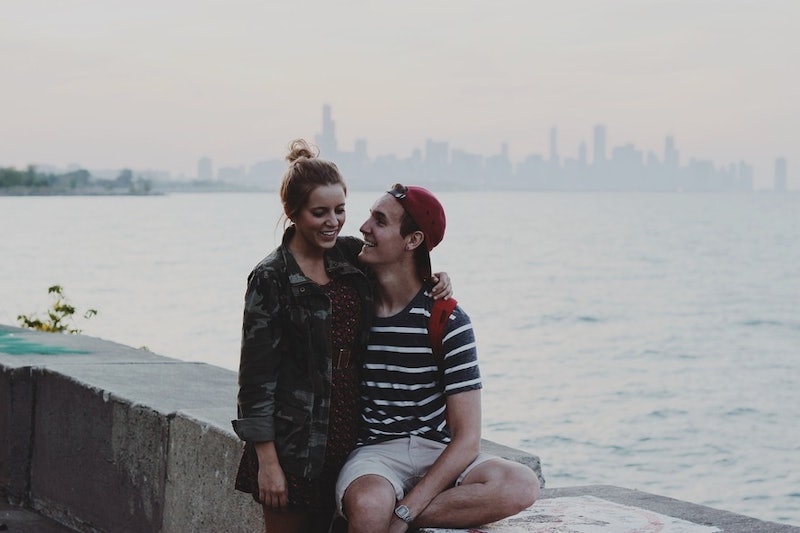 Do you have people in your life who are calm, cool, and collected no matter what? You know, the ones who tend to be happy, and who can diffuse an argument with their mere presence? Those are the people who have found the secret to being more emotionally intelligent. And oh, what a skill it is to have.

That's because emotional intelligence is pretty much the most necessary thing to have in relationships you have with others, as well as the relationship you have with yourself. It means having collected thoughts, plenty of gratitude, and an ability to adapt to change. And it means appreciating, and getting along with, all the people in your life (partners, coworkers, friends, etc.).

As Kim Chronister, Psy.D., tells Bustle over email, "Emotional Intelligence involves the ability to identify one's own emotions and the emotions of others. Emotional Intelligence is also about managing one's emotions and utilizing skills for regulating emotions such as anger, resentment, sadness, frustration, guilt, etc. [It] has four components that include self-awareness, self-management, social awareness, and relationship management." You know, four things that are super important to being on a planet with people.

Paying attention to these emotions is important for your mental health, physical health, personal relationships, and also your career, Chronister says. And if not dealt with properly (by suppressing your emotions, or worrying about them endlessly), you can even give yourself undue depression and stress.

So yeah, it's a pretty good idea to check yourself, and work on boosting your emotional intelligence. Here are a few ways to do just that.

1. Practice Being Assertive, No Matter What

Think back to times when you were passed over for a job, ignored in a social group, or blamed for something you didn't do. It probably didn't feel very good, and that feeling probably stuck around for a while afterward. That's because, while it's hard to be assertive, it's a necessary thing to do if you want to feel (and be) respected. And, as Chronister says, "Asserting one's needs can have a powerfully positive affect on one's emotions." So do yourself a favor, and start sticking up for yourself.

2. Try To Be As Empathetic As Possible

Emotional intelligence isn't just about recognizing your own thoughts and feelings, but also the thoughts and feelings of others. This can come in handy with friends, but also in work environments. As Karla Jennings said on Lifehack.org, "Increasing your ability to empathize can help you get closer to others, gain their support when you need it, and potentially defuse high-charged conflicts in your professional and personal life." Definitely a skill worth having.

3. Learn To Be More Mindful

Mindfulness is not only a good way to be more in the moment, but it can also help you deal with stressful situations. "Mindfulness techniques such as yoga, meditation, guided imagery, and mindful walks are known to decrease stress which will help regulate emotions," Chronister says. And more regulated emotions is really the name the game.

Try: Mindfulness: An Eight-Week Plan for Finding Peace in a Frantic World , $10, Amazon

4. Bounce Back After A Problem

The same bad thing can happen to two people, but an emotionally unhealthy person may view the situation as way more skewed and upsetting than it needs to be. Clearly, it's much better to put a positive spin on things, which can make bouncing back after a problem that much easier. According to Preston Ni, M.S.B.A., on Psychology Today, "How we choose the way we think, feel, and act in relation to life’s challenges can often make the difference between hope versus despair, optimism versus frustration, and victory versus defeat."

5. Come Up With Solutions, Instead Of Arguments

Let's say your SO is really getting to you today. You can be reactive, and start yelling and screaming. Or, you can be proactive, and start looking for solutions together. As Chronister says, "When you are triggered by someone, stay proactive in your dealings with them rather than reactive. This will take practice but it can eventually become automatic for you."

6. Let People Know You Love Them

If you want healthy relationships, the way to go about that is to be open — open about your thoughts, open about your concerns, and definitely open about your emotions. According to Ni, "The ability to effectively express and validate tender, loving emotions is essential to maintaining close personal relationships. In this case, 'effective' means sharing intimate feelings with someone in an appropriate relationship, in a manner that's nourishing and constructive, and being able to respond affirmatively when the other person does the same." What could be better than that?

7. Feel All Those Crazy Emotions

If you're mind is constantly chattering away, don't try to distract yourself or "turn off" your thoughts. As Norman Rosenthal, MD, wrote on his blog NormanRosenthal.com, "Try not to dismiss your feelings before you have a chance to think them through. Healthy emotions often rise and fall in a wave, rising, peaking, and fading naturally. Your aim should be not to cut off the wave before it peaks." Just let them do their thing, and be the mindful observer.

8. Listen To The Aches And Pains In Your Body

Your body can really say a lot with physical feelings of fear, anxiety, or sadness that are bubbling under the surface. Constant headaches, a knot in your stomach, or the "butterflies" can all be subconscious signs of negative and positive things in your life. As Rosenthal said, "Listening to these sensations and the underlying feelings that they signal will allow you to process with your powers of reason." So practice being aware of these signs, and promise to change the negatives in life that affect you physically.

9. Develop Some Gratitude (Probably With A Journal)

Emotionally intelligent people are able to appreciate what they have in life, as opposed to the "glass half empty" types who seem blind to all the good they encounter. That's why it's worth boosting your appreciation levels on the regular. As Harvey Deutschendorf said on FastCompany.com, "One way of developing gratitude is to keep a gratitude book and every morning before you do anything else, write down ten things you are grateful for. This helps to keep up a positive attitude and motivation throughout the day."

People who don't know how to regulate their emotions are the ones who blow up at everything and anything when they're stressed. Not only does this suck for everyone around you, but it also sucks feeling like you just can't deal. According to Daniel Goleman at the New York Times, balanced people will stay calm under pressure and recover quickly after upsets. They also will not blow up, or take out their anger on others.

Ever notice how some people meet change with little more than a blink, while other's crumble at the very thought? Of course there's a lot more going on with change than just emotional intelligence, but it sure does help you deal when it's time to move or switch jobs. As Rhett Power noted on Success.com, "People with high [emotional intelligence] aren’t afraid of change. They understand that it’s a necessary part of life — and they adapt."

Keep these tips in mind, and hopefully your emotional life will be just that much easier.