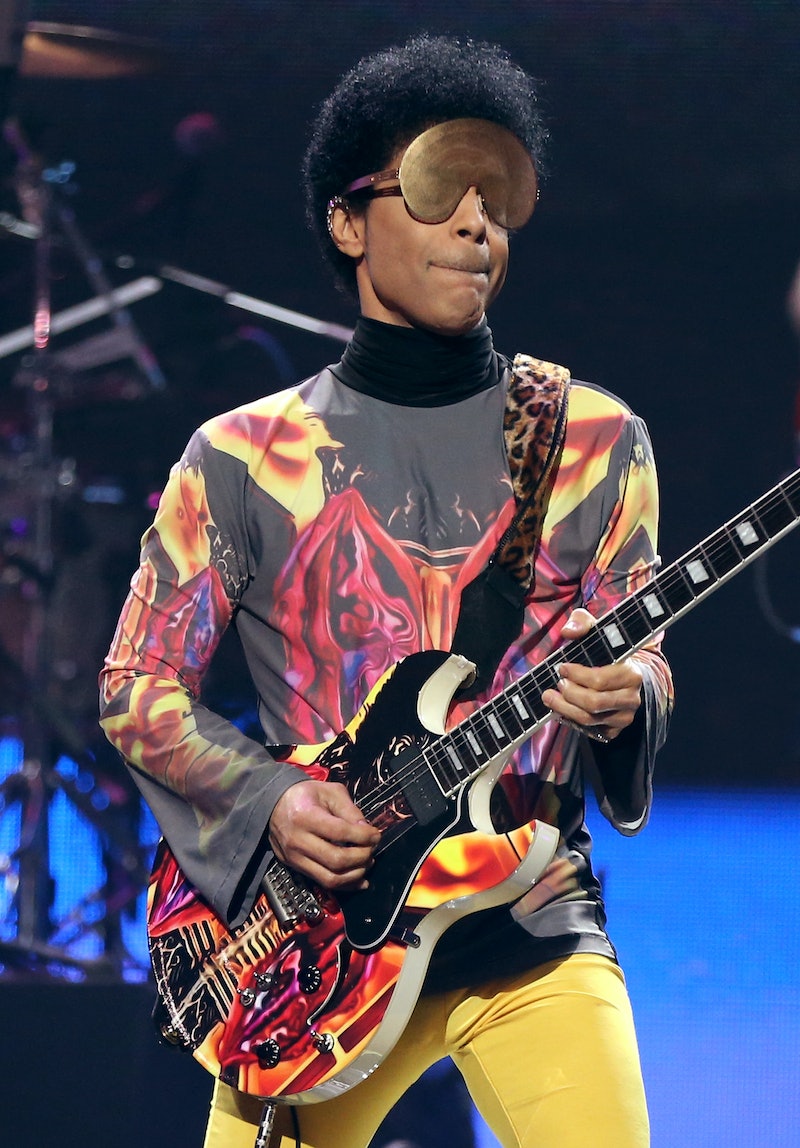 The news of Prince's death is both sad and shocking. The 57-year-old superstar was a talented singer and songwriter, a leading pioneer in innovative sound, and a style legend. In an effort to honor Prince, his artistry, and his unbeatable style, here's a breakdown of Prince's most fantastic sunglasses of all time. There's no doubt he will be sorely missed, but there's also no question that his work and style will live on.

As a millennial born in the mid-90s, I wasn't fortunate enough to grow up with Prince during his reign in the '80s like the generation did before me. That being said, I was still familiar with his catchy tunes and his badass performances, and absolutely loved everything I heard and saw. But if there's one thing that I always took for granted, it was his style. Looking back, there's no denying Prince had beyond amazing personal style that not only suited his creative vision perfectly, but also opened the door for countless trends and designs, as well as pushed boundaries for what fashion means for both men and women. Plus, he consistently slayed in amazing accessories, always rocking a pair of unique sunglasses like a true superstar.

While the news of his death isn't easy to hear, here's to celebrating a talented musician whose unique, personal style was off the charts. Turn on some Prince tunes and check out his 11 most fantastic sunglasses, and let's honor Prince the right way.

I only wish I could be that awesome in oversized, blacked out sunglasses.

I don't even mind that Prince wore sunglasses on stage; they made his ensembles that much chicer and gave him an indescribable edge.

Have you ever seen anyone pull off three-lensed sunglasses as well as Prince? Nope, didn't think so.

Reflective lenses in sunglasses has been really trendy as of late, and I wouldn't be surprised if it was Prince himself who started this craze. Just look at how he pulled those off flawlessly.

I don't exactly know how to describe these gold, forehead covering sunglasses. But I do know that Prince is one of few people who could wear them and look totally and completely awesome. Bravo, Prince.

Asymmetrical sunglasses? I don't think Prince ever met a pair of sunnies that he didn't like.

You can't go wrong with a classic, round shape in sunglasses. Prince made them look chic and stylish with a printed jacket and graphic T-shirt.

Is that a Versace logo I spot on the side of his sunglasses? The man knew style, and her certainly wore designer sunglasses very well.

Even when he wasn't performing or at a special event, Prince had a tendency to rock sunglasses. And for good reason; because he just couldn't not pull them off, even at sporting events.

You'd think the accessories would stop at a huge statement necklace. But alas, Prince knew how to pair even the most loud accessories with the perfect pair of sunglasses for a unique look.

I think it's safe to say there will never be another person who can wear sunglasses quite like Prince did.

From his incredible style to his amazing career in music, there has never been anyone else one quite like Prince.