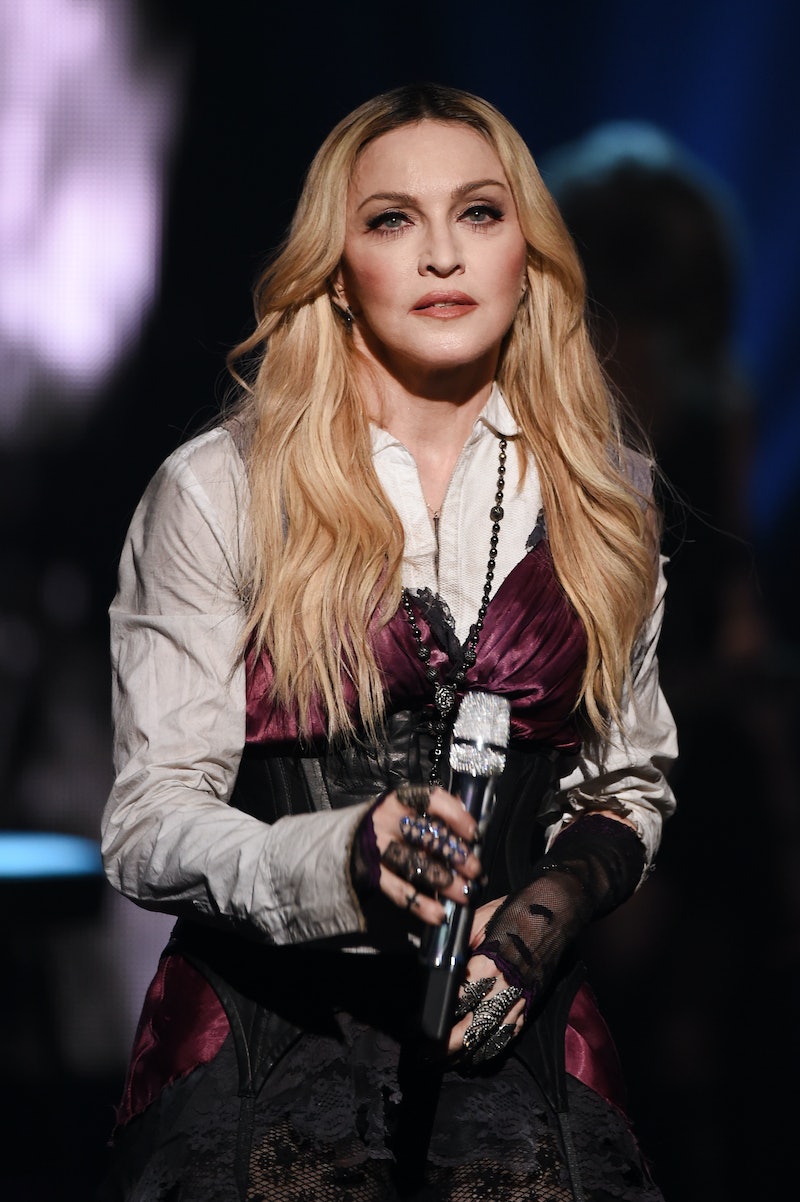 Tragic news that music legend Prince has died at age 57 sent fans reeling on April 21, and the outpour of tributes celebrating the life and talent of the "Little Red Corvette" singer is a true testament to just how big a legacy he leaves. Fans immediately took to social media to reflect on Prince's lasting impact, and celebrities have been getting in on the action too, posting tweets and Instagram photos about how much Prince influenced their lives, and how much he will be missed. One of the most poignant examples of this? Madonna remembered Prince with an Instagram photo that will seriously make you cry, if you aren't already. It's truly touching.

The singer posted an old-school photo of herself hanging out with Prince in a decade removed. The two are wearing matching bright yellow jackets, and both are smiling. While the photo is a heartwarming snapshot of what their friendship once looked like, it is Madonna's caption that will really make you reach for a tissue. "He Changed The World!! A True Visionary. What a loss. I'm Devastated. This is Not A Love Song," she posted. That last quip is a reference to "Love Song," a track from Madonna's 1988 album Like a Prayer. The two artists collaborated on the song together, and even recorded it at Prince's studio. Prince also played guitar on three other songs from the album, including "Like a Prayer."

Madonna's relationship with Prince saw many highs and lows through the years — the pair dated briefly in 1985, and barbed words were occasionally exchanged between the two in later years. But, Madonna's post shows that despite any feuds the singers may have had, she still respected his tremendous talent.

TMZ first broke the sad news that Prince had died in his Paisley Park compound, just one week after the singer's jet was forced to make an emergency landing because of a medical issue that still remains unclear. He will be truly missed.

More like this
Prince William & His Kids Are Adorable In A Smiley New Photo For Father’s Day
By Stephanie Topacio Long
Who Is Betty Who Dating? The Australian Singer Is Married To Her Tour Photographer
By Radhika Menon
Zooey Deschanel Can't Be Anyone But Herself
By Samantha Leach
Sadie Sink Would Escape Vecna From 'Stranger Things' With This Taylor Swift Song
By Grace Wehniainen
Get Even More From Bustle — Sign Up For The Newsletter