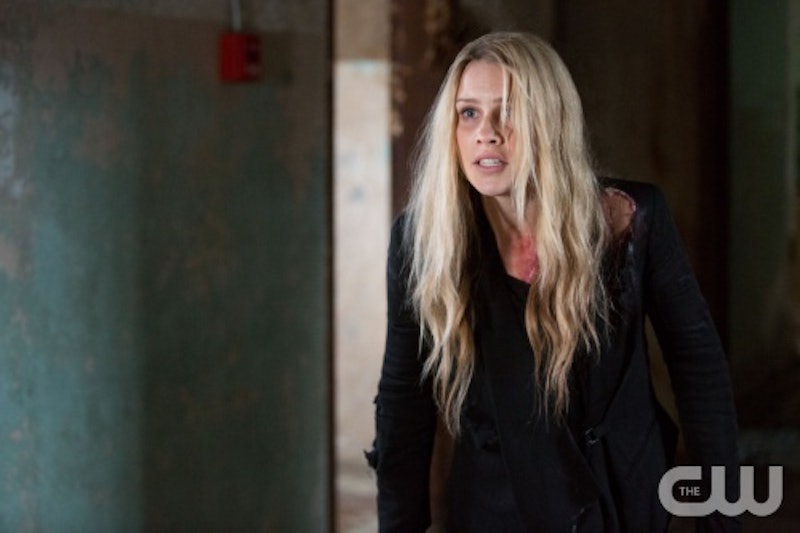 Sink your teeth into this Originals scoop: the big, bad Mikaelson patriarch, Mikael, will make an appearance on The CW series following its break for the Winter Olympics. According to Sebastian Roché's IMDB page, the actor will be reprising his role as Mikael in the show's 15th and 16th episodes that will air in March. Mikael was killed by Klaus on The Vampire Diaries , so why have him return now? Well, because he has something to do with Rebekah and Marcel's big secret that's got Genevieve all riled up — and we think we know what it is.

According to the backstory we were given on the Original family throughout their appearances on TVD, we learned that Mikael Mikaelson was just about the worst father ever. He begged a witch to turn his children immortal to give them and edge over werewolves and then denounced them as abominations. He tried to kill Klaus multiple times and devoted his life to chasing his children around the world with the intent to kill each one of them with a dagger through the heart. Pleasant, huh? When Mikael finally caught up with them in Mystic Falls during TVD's third season, Klaus killed him and put an end to his torment. Thus bringing us to his impending Originals appearance.

In a series of flashbacks to 1919, Klaus opens up to Cami and reveals details of the devastating secret Rebekah and Marcel were trying to keep from him. Elijah forms an unlikely alliance with Monique (guest star Yasmine Al Bustami) and asks for her help in locating Sabine (guest star Shannon Kane). Elsewhere, Thierry (guest star Callard Harris) is reluctant to get involved when Marcel and Rebekah approach him with a plan to take down the witches. Meanwhile, in the bayou, Hayley is at her wits’ end and holds Sabine hostage in an attempt to get information that will reverse the curse on Phoebe’s werewolf clan.

This means two things: First, that Klaus is going to find out about Rebekah and Marcel's secret during episode 14 (while they're being tortured by Genevieve in the sanitarium she once worked at with Rebekah), and second, that the secret has something to with Mikael. Since Mikael is dead, he will more likely than not appear in Klaus' flashback. Additionally, we know from previous flashbacks that Mikael tracked his children down in New Orleans in 1919 — they weren't captured, but it resulted in a vampire massacre, during which it was believed that he killed Marcel, and the burning down of half of the city. None of these things are a coincidence. I mean, obviously.

So here's what appears to have gone down. Klaus forbade Rebekah and Marcel from getting together, but, obviously, since Marcel is absolutely gorgeous and charming, Rebekah fell for him anyway. (She also has a rebellious streak and really doesn't like when Klaus tries to tell her what to do.) They wanted to be together so badly that they had to come up with a plan of any kind to get Klaus out of the way so they can live happily ever after. (We know that they did come up with a plan to drive Klaus away, but we weren't sure that that was their actual secret until recently.) That's where Mikael comes in.

We saw a few weeks ago that Rebekah, who's always vowed her loyalty to Klaus even though he's been terrible to her for thousands of years, isn't afraid to make power plays against her brother. She's at her wit's end and we'll assume that back in the early 1900s, when she just wanted to fall in love and live her life, she was also at her wit's end. And that led her to tipping off Mikael (with the help of Genevieve and the witches, possibly) about Klaus' whereabouts — she might also promised to help take him out if it meant her safety was guaranteed (because this is Rebekah and she knows how to strike a bargain). BUT either because Mikael hates his children so much that she couldn't trust him not to dagger her, OR her conscience kicked in and she realized that no bond is stronger than family — Rebekah grabbed Klaus and fled to Chicago. That's sibling love right there.

A secret this big getting out would be life-threatening to Rebekah and Marcel because deceiving Klaus never ends well. But the synopsis reveals that Klaus will perhaps have a different reaction that we initially thought — he's going to talk about his feelings. Definitely not typical Klaus, but has he learned his lesson about "throwing tantrums" as Marcel kindly put it during the most recent episode? Instead, Rebekah and Marcel will be probably be destroyed in a different way — by getting the epic freeze-out by Klaus or just having to live with the guilt that Klaus knows that they tried to have him killed. Sigh, Original family drama — I guess Rebekah deserved all of those times Klaus daggered her for 50-year periods. You reap what you sow, girl.

More like this
Julie Andrews Revealed A Surprising Behind-The-Scenes 'Bridgerton' Detail
By Grace Wehniainen
What’s New On Netflix: Lana Condor’s Ghostly Comedy & A Sexy Reality Series
By Arya Roshanian
Yes, Joseph Quinn Is Actually Playing The Guitar In This Epic 'Stranger Things' Scene
By Alyssa Lapid
Vecna Officially Has A Fan In 'Stranger Things' Star Jamie Campbell Bower
By Alyssa Lapid
Get Even More From Bustle — Sign Up For The Newsletter