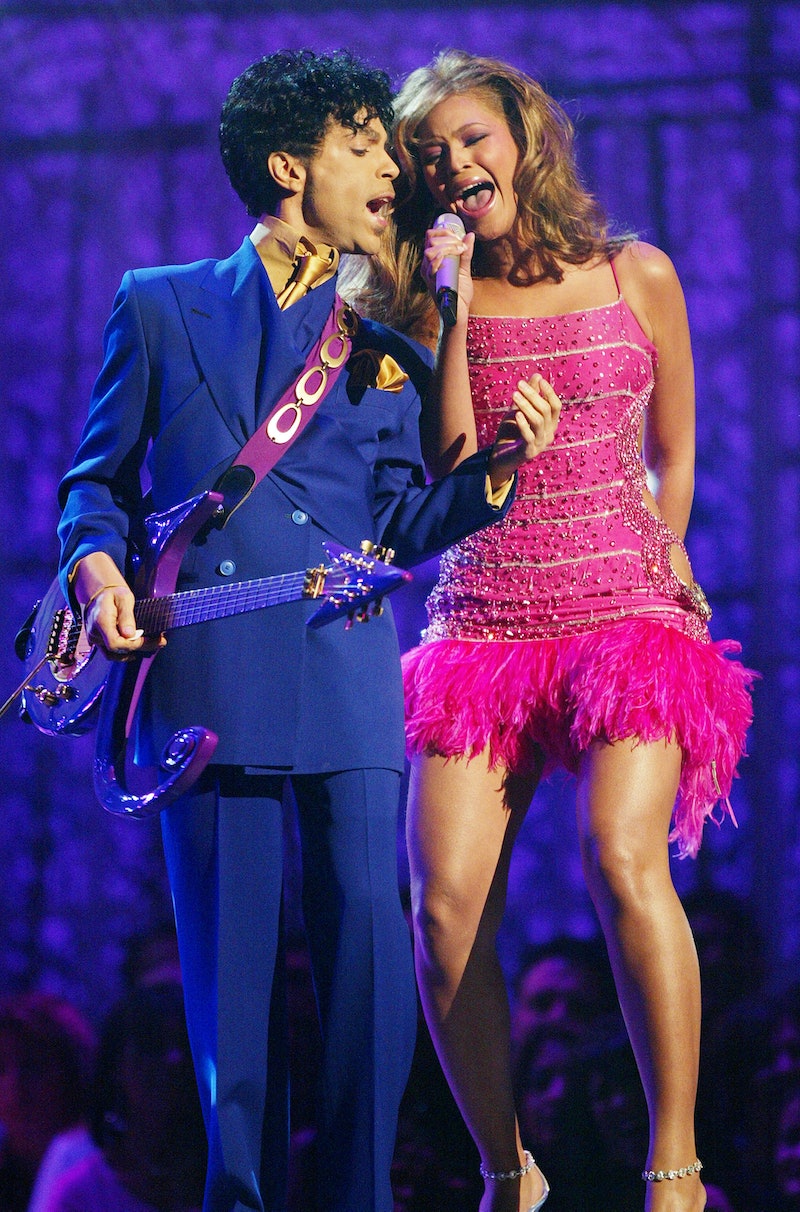 As the world comes to terms with the unexpected death of legendary musician Prince Thursday morning, fans across the world are taking solace in not just the artist's music, but his sweeping cultural legacy. In addition to the expansive body of work he leaves behind, Prince's public persona in pop culture remains so iconic that it needs no introduction. Within his dearth of appearances — which span just about every entertainment genre, from award shows to children's television — Prince needn't even say a word: His iconic purple guitar and larger-than-life getups (lest we forget his symbol?) did most of the talking for him.

Of course, if ever there was a joke to be made, Prince was in on it, too, making a slew of now-iconic, tongue-in-cheek cameos on everything from New Girl to Muppets Tonight. Mentions of his name and references to his iconic image run the gamut from pop culture mainstays, like The Simpsons, to a decidedly less-expected cereal commercial featuring The Flintstones' Barney Rubble in purple fur. (There's even a Zadie Smith shoutout in there, too, for some highbrow/brilliant quadrant-level culture.) In honor of the entertainer's decades-long legacy, are 21 of the most iconic Prince mentions of all time:

Kesha's story about her allegedly breaking into Prince's house is everything you want it to be. It is 100 percent worth watching in every way if you haven't seen it already, I promise.

And when it comes to decidedly more adult-oriented Animaniacs humor, there's plenty more where that came from.

Vivian: Don't you just love Prince?Edward: More than life itself.

"I've been dope, suspenseful with a pencil ever since / Prince turned himself into a symbol." Side note, did you know your computer can read "The Artist Formerly Known As Prince" symbol? It can, and you're welcome.

Lassiter: Hey, we found prints.Shawn: Was he in a Little Red Corvette?Gus: Under The Cherry Moon?Lassiter: Fingerprints.

Reminiscent of a certain cartoon, no?

The $19.99/"1999" is just one. There are so many Prince references in The Simpsons that it almost merits its own article.

I have no idea whether Ice Cube and Prince were actually neighbors, but if the book Prince: The Man and His Music — and my very brief Google search on the matter — are to be believed, the answer is a definite maybe. But probably not, since Prince seems to have sold a home in Beverly Hills and Ice Cube supposedly lives in nearby Encino. Feel free to prove me wrong, though.

In addition to getting name-checked in the film, Prince also arranged and wrote the song "A Love Bizarre" for its soundtrack.

In one chapter, a younger character, tasked with packing up essential items from his house in a hurry, brings his "betamax copy of Purple Rain ." Next question: What's a betamax?

14. The Colbert Report And The Late Show With Stephen Colbert

In addition to honoring the musician shortly after his death this past week, Colbert also paid tribute to Prince on his former late-night show years before.

"You know how long I’ve been on ya / Since Prince was on Apollonia / Since O.J. had Isotoners / Don't act like I never told ya."

"I guess I cleaned up my act like Prince would do."

This, according to Vulture, references how, after Prince "found religion as a Jehovah’s Witness in 2001, he would occasionally sanitize some of his older songs when he played them live."

"Straight up, wait up, hold up, Mr. Lover / Like Prince said you're a sexy mutha-"

"I will never show you, so don't try / You all I want, like when Prince made doves cry."

"When Doves Cry," the lead single off Purple Rain, of course.

"Just 'cause I got a lot of fame super / Prince couldn't get me change my name papa."

And just when you thought that song couldn't get any better.

Expect contenders for this list to stack up in the coming days and weeks as late-night talk shows and culture-based cartoons alike hustle to pay tribute to The Artist We'll Always Know As Prince.