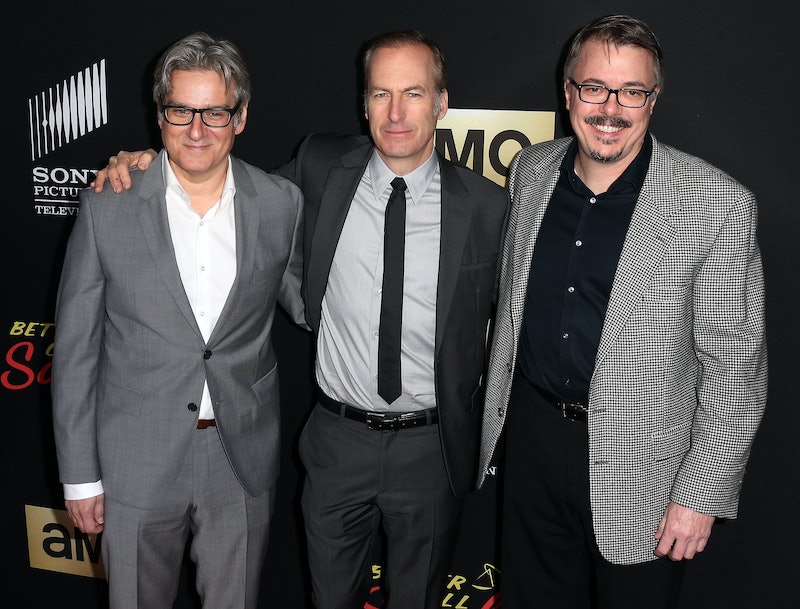 Because of the deep connections Better Call Saul shares with the series that inspired it, Breaking Bad, fans believe they can figure out what will happen next on the AMC spinoff series. However, there is no better source for Better Call Saul Season 3 spoilers than the people who make the series — showrunners Vince Gilligan and Peter Gould. Since the Season 2 finale aired on April 18, Gilligan and Gould have been giving interviews about what may go down in Season 3 of Better Call Saul. While their clues are far from totally explanatory, they do provide plenty of discussion points and as we most likely will have to wait until February 2017 for the show to return to TV, I'll take any scraps of intel the genius minds behind Breaking Bad and Better Call Saul are willing to give.

As you patiently wait for Season 3, check out these hints about what to expect from Gilligan, Gould, and Odenkirk. Besides searching for more Breaking Bad Easter Eggs, these will hold you over until Better Call Saul returns.

The Writer Of The "Don't" Note Will be Revealed

On the Chris Hardwick-hosted Talking Saul, the only clue that Gould and Gilligan would give about Season 3 after the Season 2 finale aired was about the note that said, "Don't," which Mike found on his car after attempting to kill Hector Salamanca. Gould said, "I think we're gonna find out who wrote that note — at least Mike will." Many fans have already theorized that Breaking Bad baddie Gustavo Fring is the man who wrote the note and the showrunners pretty much already hesitantly confessed to Gus' involvement due to a not-so-hidden anagram they planted (more on that in a second). As Gould told Variety in an interview, "Now that the cat is out of the bag, we're certainly thinking Gus Fring had a hand in what happened with Mike at the end of Season 2."

Whether or not Gus wrote the "Don't" note himself or had one of his lackeys do it, there is no denying that Los Pollos Hermanos owner Gus Fring is going to be involved in the Better Call Saul world in Season 3. In the interview with Variety, Gould said, "Whether [Gus] appears in episode one, two, three, four, five, or any of them, is still up in the air. He's certainly, it's safe to say, already a presence on the show." This admission about Gus Fring is partially due to a fan who reordered all of the episode titles of Season 2 and discovered that the first letters of the titles spell out "FRINGSBACK." Gould and Gilligan told Vanity Fair that they did not expect fans to figure out that clue before the Season 2 finale aired, but once the Internet figures something out, it doesn't go away quietly.

Maybe because of the anagram being solved already, Gilligan also confirmed Gus' involvement in Season 3, even if he made sure not to make any promises. "Just because Fring's back — technically speaking, if not literally — it doesn't mean that folks should assume that they'll see him at the beginning of Season 3," Gilligan told Vanity Fair. He continued with this sentiment when he told HitFix, "It was never the intention for Gus to be in [the Season 2 finale]. And to take it a step further, people should not assume in any way, shape, or form that they'll see Gus in the first episode of next season. It's possible they will. It's also possible, if not more possible, they won't." Even with Gilligan's ambiguous comments, I'm hopeful Gus Fring will indeed be in the later episodes of Season 3.

Gilligan admitted to Entertainment Weekly that he had wanted Marie (portrayed by Betsy Brandt in Breaking Bad) to be the person running the CAT scan for Chuck in the Season 2 finale. He said that Gould and the other writers convinced him it would be too distracting, so they axed the cameo, but that doesn't mean you shouldn't expect to see Marie or other Breaking Bad characters in Season 3. "We'd love to see all of them, selfishly speaking," Gilligan said to Entertainment Weekly. "The problem for us is to be self-disciplined enough not to just throw them all willy-nilly into every single episode," Gilligan said.

Gould echoed this sentiment in the aforementioned Variety article, saying, "There's always a temptation to do an episode which is a just a giant class reunion — which we'd love to shoot and it would be so much fun in Albuquerque to have everybody there — but we're really slaves to the story that we're telling. We have to make sure that anything we do is justified by the story of Jimmy McGill and Mike Ehrmantraut."

Jimmy & Mike Will Work More Together

Season 2 saw less of Jimmy and Mike interacting with one another than Season 1, but fans know because of Breaking Bad that these men's lives are seriously intertwined professionally. For people who love seeing Odenkirk and Jonathan Banks play off each other, Gilligan offered some hope in his HitFix interview. While discussing that Better Call Saul is almost two shows in one — Saul's story and Mike's story — Gilligan told HitFix, "Having said that, we are always very happy when these two worlds collide, and we will continue to look for moments to make that happen. Maybe there will be more of them in Season 3." Of course, Gilligan didn't officially commit to more Jimmy and Mike just yet, saying, "No promises, but you can be sure that these two will be working together, because when we saw them on Breaking Bad, Mike was Saul's private investigator. We know the Titanic's going to hit the iceberg eventually. We just don't know where."

Chuck May Try To Get Jimmy Disbarred

Although Odenkirk swore to Entertainment Weekly that he doesn't know what is happening in the writers' room of Better Call Saul, he does anticipate that Chuck will ultimately try to bring down Jimmy with the recorded confession that Jimmy transposed the numbers of the Mesa Verde documents. "Of course, we don't really know what Chuck's going to do with that, but I imagine he's going to try to get Jimmy disbarred," Odenkirk told Entertainment Weekly. "I guess if he really loves his brother, he might say 'Okay, I have this tape now. Don't f*ck around anymore.' But I don't think that's what he'll do."

I'm in full agreement with Odenkirk that Chuck won't stop at just getting the evidence that Jimmy tampered with legal documents, but if it's any consolation, Odenkirk also mentioned that even if Chuck tries to disbar Jimmy, fans have to assume that Saul has a law license. Perhaps Chuck's tape is the reason Jimmy takes on the persona of Saul Goodman?

With two seasons of Better Call Saul down, Breaking Bad fans are still waiting for Jimmy McGill to become Saul Goodman — I mean, the show is titled Better Call Saul after all. Although Gilligan and Gould have not said when in the series that Jimmy will become Saul, Odenkirk said in his Entertainment Weekly interview, "I do think we're close." As for the transition process, Odenkirk believes once Jimmy decides to become Saul, he'll do so swiftly. "I've said this a couple of times, so I don't feel bad about saying that I think the journey from Jimmy McGill to Saul is like falling off a cliff," Odenkirk said. "At a certain point, it's not a gradual thing at all, so when people ask, 'How long will it take?' I think that it'll take a day."

Yet, it wouldn't be fair of me not to include Gould's take on the Saul transformation. He told Yahoo, "Because the truth is, even Jimmy McGill at the end of Season 2 ... this guy is still so far away from, for instance, advocating murder for profit, that I have to say, we still have quite a ways to go."

Although I can't wait to see Jimmy become Saul, I'm also comfortable with Gould saying there is still "quite a ways to go" since that means there will be more Better Call Saul to come after Season 3 and I'm along for this ride for as long as it lasts.