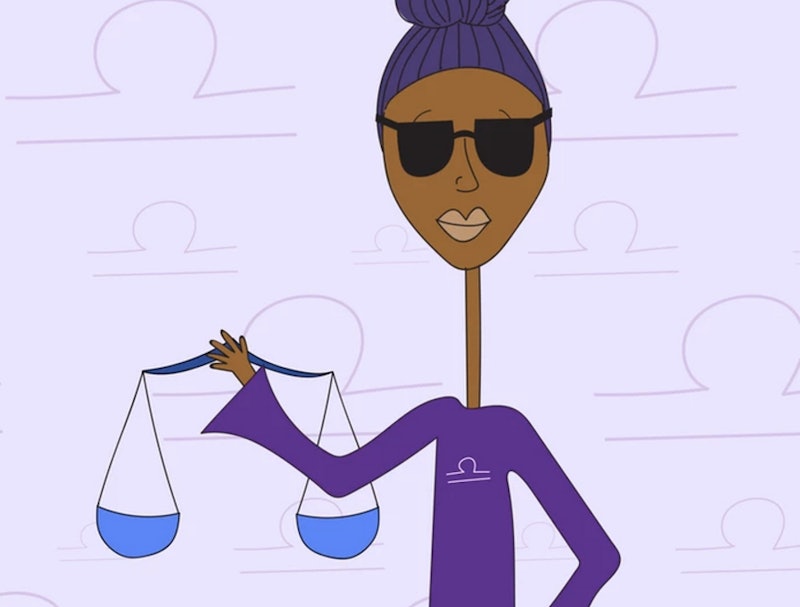 As someone who seriously considered calling in sick to work the last time Mercury went retrograde because I wasn't sure if I was mentally or emotionally capable of dealing with the stressful side effects of the universe going haywire, I froze when I heard that five planets will be retrograde all at once this week. Depending on who you talk to, this is either huge news or no big deal, but I personally had to know — what does five planets being retrograde mean for Libra? My fellow Libras and I can be a delicate bunch sometimes. Our symbol is the scales, and anything that tips those beautiful, precious scales in one direction or another, no matter how slightly, can mess with our inner sense of balance. Not only that, but we're incredibly detailed oriented. If I'm able to do anything to prepare myself for the shenanigans of the universe, you better bet I'm going to at least try.

First, a bit of a disclaimer: I am not an astrologer, just a girl who reads her horoscope every single morning before I even check Instagram. But that being said, the wonderful resource we call the internet has made it pretty easy for amateur astrologists to figure out a few things about what's going down without having to consult a lot of confusing charts, and the like. What have I found out so far? Well, for one thing, it's possible we've felt the effects of planets that went retrograde earlier this year and didn't even realize it. For instance, Jupiter, a planet that rules growth and opportunity, went retrograde Jan. 7. Saturn went retrograde in March, and Pluto and Mars followed suit earlier in April. And now? Our good friend Mercury is getting in on the action — Mercury goes retrograde April 28.

Of course, planets being retrograde isn't a permanent state. If you feel a little off in the days to come, just know that life should return to normal in a few weeks, and balance will be restored to those perfect scales of yours, Libra. In the meantime, here's a quick look at the ways each planet might affect us as we close out April.

Jupiter is the planet of wealth and opportunity, and usually encourages us to chase after things we want in life. When it's retrograde, it's good for all signs to pay close attention to finances, and try to cut down on spending — this is the perfect time for an unforeseen money emergency to pop up. Actually, this applies to more than just finances, too. When Jupiter is retrograde, people tend to be more withholding of their other resources, like time and emotions. Libras in particular might find themselves with fewer opportunities than normal, both when it comes to socializing, or beginning new projects. Keep an eye on your wallet — all signs are going to want to reign in spending — but don't sweat it too much. Jupiter resumes its regular track May 9, 2016.

When Saturn is retrograde, insecurities and self-doubt arise. Honestly, Saturn is kind of a bummer for everyone. People of every astrological sign tend to start grappling with uncertainty and questions of self-worth when the planet is retrograde. Libras are already notorious people pleasers — we just want everyone to be happy! — and might feel more pressure than usual to take on more tasks than what we can realistically complete. I know it's hard, but the word "no" is your best friend until Saturn goes direct in August. You don't want to stress yourself out!

Mars is the planet associated with sex and determination, and it doesn't go retrograde as frequently as some of the other planets, meaning we're in for an unusual dustup. With Mars retrograde, you might be feeling a little less energetic than normal, and perhaps not quite as sex-driven. Most astrologists advise people not to begin any new sexual relationships during this time, or accept new projects. Libras in particular might feel less confident about expressing themselves, and it's possible that a few relationships (romantic or otherwise) might feel a little tenuous at this time. The good news is, Libras are natural diplomats. You should be able to casually diffuse any trouble you're having with a friend or partner in no time.

When Pluto goes retrograde, we all become a little more reflective, delve into our subconscious desires, and do some self-reckoning. This can be viewed as a time to clean up shop in the emotions department, and get rid of any baggage or unproductive ways of thinking that might be weighing us down.

Ah Mercury, you rascal you. Mercury, the planet that oversees communication, has a tendency to drive us all a little insane when it goes retrograde — wires get mixed up, signals get confused, cues get dropped, and in general, it can feel like we're all talking past each other. People are advised to stay way from entering any contracts during Mercury retrograde, and not to make travel plans if it can be avoided. As for Libras? Ouch, this time period can feel especially brutal. Don't begin any new projects or endeavors, and make sure to take your time with everything. Rushing will only lead to mistakes. You should be fine, so long as you double check all your work. Then, take a deep breath. Mercury goes direct April 22, and you're back in the clear.