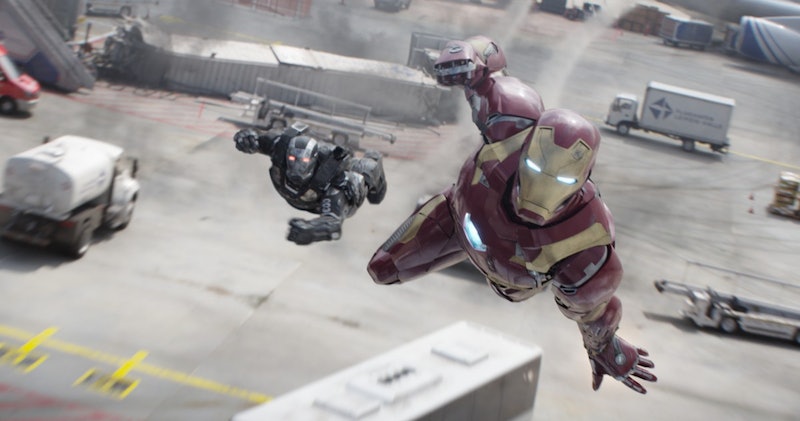 It's finally almost here. The most anticipated movie in Marvel history, Captain America: Civil War, comes charging into theaters on May 6, and the film has already won over just about everybody — despite not even being released yet. The movie currently sits at a near-perfect 97 percent rating on Rotten Tomatoes after 35 reviews, a rating that, if it holds, will make it the best-reviewed Marvel movie yet. And what better way to celebrate the movie's impending success than with a bunch of awesome Captain America: Civil War gifs & memes?

2016 is being hailed as the year of the superhero movie, with two major blockbusters already in the bag. Deadpool kicked off the year with superb reviews and went on to become both the highest-grossing R-rated movie of all time and the highest-grossing 20th Century Fox production ever. Then, Batman v Superman: Dawn of Justice came along, and although its reviews were less than stellar, it still became a cultural phenomenon and is likely to gross around $900 million at the worldwide box office. But Civil War looks to be the cream of the crop, with the critical reviews, cultural clout, and box office potential to be the biggest movie of the year in every respect, period. So if for some reason you're not yet excited for the film, here are 18 reasons why you should be.

1. When You Realize This Will Be The Greatest Superhero Battle Ever

This is a comic book come to life, like, for real.

Someone's been working out.

4. When The Action Is So Good You Literally Can't Even

Every other action movie can go home now. It's over. The genre is done.

5. When You Realize They Won't Make The Same Mistakes As That Other Fighting Superhero Movie

That's how they roll in Wakanda.

7. And Also A Total Badass

Actually, I guess technically that's how they roll in Wakanda.

9. And Proves He's Not Messing Around...

He certainly moves like Spider-Man, but is he funny?

11. When Falcon Shows Off A Fancy New Kick Move

You know what? I actually think Team Iron Man might be where the smart money is.

13. When RDJ Reveals What They're Really Fighting About

14. When Stuff Gets Real

That had to hurt.

The Winter Soldier is clearly playing for keeps.

16. When You Realize This Movie Might Cost You Some Actual Friends

Get ready to start your own civil war.

17. When You Learn That Friendship Never Dies...

Annnnnd my heart just broke in half.

OK, if you're not sufficiently excited for the movie after this, then you need to have someone resuscitate you because you died and you're dead now. Hopefully you'll make it back to the land of the living in time to catch Captain America: Civil War in theaters.

More like this
One Powerful Quote In 'Doctor Strange 2' Is Going Viral On Twitter
By Alyssa Lapid
Elizabeth Olsen's Chris Evans Friendship Update Was Accidentally Hilarious
By Grace Wehniainen
Wait, Did Wanda Die In 'Doctor Strange And The Multiverse Of Madness'?
By Arya Roshanian
Hayden Panettiere Will Return For 'Scream 6': "We F*cking Won, Scream Fam"
By Jack Irvin and Jake Viswanath
Get Even More From Bustle — Sign Up For The Newsletter