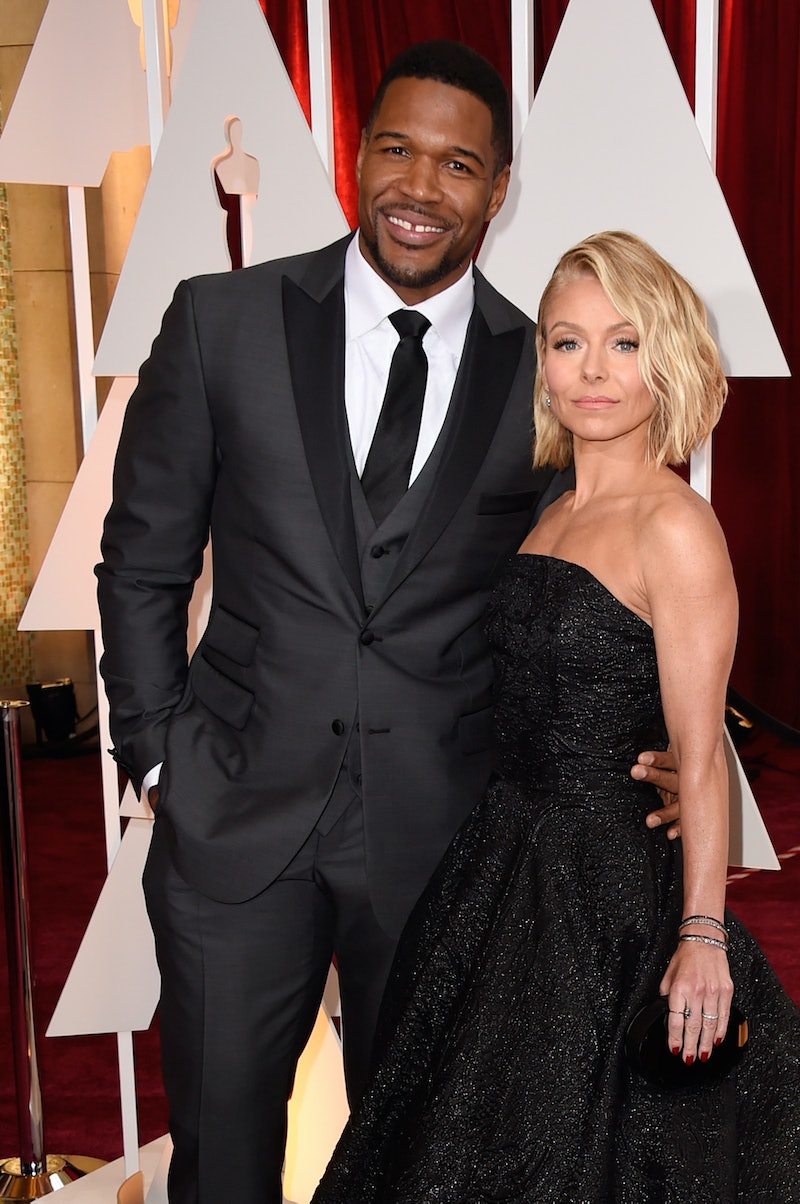 On April 19, fans of Live! were surprised to learn that Michael Strahan will be leaving his Live! co-hosting spot to pursue a full time gig on Good Morning America — a show that he had insofar been appearing on twice a week. Now, it seems that things have taken another shocking turn. When Strahan's impending exit was made public, it was said that Strahan wouldn't be leaving until September of 2016, but, as of Tuesday, Us Weekly reports that Strahan will be saying goodbye to Live! With Kelly and Michael months before the originally scheduled departure. In fact, according to Us Weekly, Strahan will be leaving Live! May 13. This new announcement follows Kelly Ripa's emotionally charged return to the show, after she took a few days off due to health reasons and a previously scheduled anniversary trip.

Live With Kelly And Michael opened Tuesday morning with Ripa explaining her feelings regarding Strahan's exit. She was candid, affecting, and kind, as she explained to fans that "Apologies have been made and the best thing to come from all of this, you guys, is that our parent company has assured me that Live! is a priority." Then, the co-host went on to congratulate Strahan."I am thrilled for Michael, I am thrilled for you. This is a tremendous opportunity and I couldn’t be and we couldn’t be prouder of you and everything we’ve accomplished together." Her response was professional, honest, and attuned to the thoughts and feelings of the audience.

Just hours after Ripa's heartfelt speech and return, however, Us Weekly was given the following statement:

After meeting with the producers of both Live and Good Morning America, and after speaking with Kelly and Michael, we have decided on a plan that best advantages both shows for the future. To that end, Michael’s last day on Live will be on Friday, May 13, which not only gives the show the chance to have a nice send-off for him during the May book, but to also immediately begin the on-air search for a new cohost. This plan also allows GMA to start integrating Michael into the show more often this summer before his full-time start in September.

With a send-off that's just a few weeks away, it seems like the higher ups on Live! will be needing to get the ball rolling on a replacement host ASAP. The jury's still on out on whether or not they will go through a series of guest co-hosts like they did when Regis Philbin left in 2012.

Through all of this, Ripa has remained gracious and has even spun what could be seen as something detrimental to the show — and by proxy to her — into a positive lesson about the necessity of open communication and courtesy in any business setting. She said on Tuesday morning, "What transpired though over the course of a few days has been extraordinary, in the sense that it started a much greater conversation about communication, and consideration, and most importantly, respect in the workplace."

Strahan extended his thanks to Ripa. He said, "I'm so happy you're back. And one thing I know about you is you love the show. You love the fans. You love this staff. I love you [...] This show has — it's been transforming for me. And I know the show lives on." As Strahan moves onto the next chapter on Good Morning America, fans are all hoping for the same thing. That the show does — and will — live on.