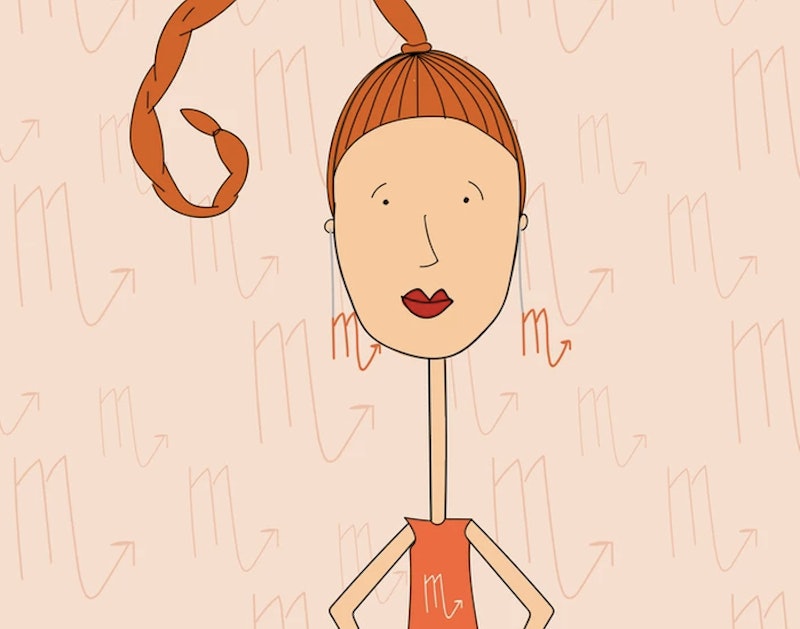 The universe can be pretty mischievous sometimes, and perhaps no more so than when planets go retrograde. When one or two do this, it can have some pretty wacky results on how we live our lives down here on Earth, but as of April 28, five planets will be retrograde, and that can have some weird implications for each zodiac sign. What does five planets being retrograde mean for Scorpio? Take a deep breath — it's not going to ruin your life or anything. But, it could have some interesting effects.

Scorpio is a water sign along with Cancer and Pisces, which can be a pretty sensitive and imaginative bunch. Scorpios in particular have some wonderful characteristics going for them — they're brave, and intensely passionate. They are loyal friends, natural leaders, and excellent secret keepers. But, they can be stubborn too. Trust me, you don't want to cross a Scorpio.

I'm personally a Libra, but some of my best friends are Scorpio, and with the planets going a little bit haywire this month, I want to make sure they know what awaits them during this slightly tumultuous time. When planets go retrograde, they tend to do the opposite of what they normally do. For instance, Mercury, the planet that oversees clear communication, is notorious for causing misunderstandings and mixed signals when it's retrograde, which is why some of your astrology-enthusiast friends may warn you against making travel plans during this time, or signing any contracts. When planets are retrograde, things get... weird.

Here are the effects Scorpios might experience from each planet that are currently (or about to be) retrograde.

Jupiter is the planet that oversees wealth, growth, and opportunity. It's actually been retrograde since Jan. 7, so if you've been feeling particularly stingy lately, either with money, emotions, or time you have available, this is probably why. During this time, everyone might experience some financial strain, and Scorpios are no exception. You may feel particularly on edge, and perhaps even a bit more competitive when it comes to your job, but rather than stress out about your career, astrologists advise you use this time to focus on other things instead that will provide a pleasant distraction, like family and friends. You're a natural leader, Scorpio, and you'll be able to bounce back from whatever drama is currently going down at work right now.

If you've been feeling especially insecure lately, you have Saturn to thank. The "karma" planet went retrograde March 25, and when that happens, many people battle with uncertainty and self-doubt. As one of the more self-aware and sensitive zodiac signs, Scorpios may feel especially overwhelmed during this time, but try not to dwell on all the things you think you're doing wrong. Surround yourself with friends, right now. They adore you, and when you're feeling down about yourself, they're just the people to help you build yourself back up.

Mars has a reputation for being an aggressive planet, but it also largely affects energy too. So, when it's retrograde, people might feel more tired than usual, and normal, everyday tasks may seem harder to accomplish. Scorpios value perseverance, and are used to seeing a project all the way through. But, while Mars is retrograde, make sure you aren't overcommitting yourself. Focus on what's already on your plate, and don't take on any new projects if you can avoid it.

Pluto is a Scorpio's ruling planet — it's one of the reasons why you come off so calm and cool. When Pluto is retrograde, Plutonian qualities are actually enhanced. Many people become more reflective, and some astrologists say that it can be a good time to detox. Use the opportunity to identify any weird emotional baggage you might be holding on to, and release it. It's the perfect time to get rid of any grudges.

Scorpios value honesty, and as such, can become especially sensitive when they think people might be lying to them. While Mercury is retrograde (it begins April 28), make sure you aren't jumping to any rash conclusions about others. When Mercury is retrograde, misunderstandings abound. Trust your instincts, but make sure you're hearing the whole story before you dismiss someone as being a liar or disloyal.

More like this
Are Gemini & Scorpio Compatible In A Relationship?
By Kristine Fellizar
All The Astrological Events Happening In June
By Nina Kahn
Your June 2022 Monthly Tarot Reading
By Jezmina Von Thiele
Here's Your Horoscope For Memorial Day Weekend
By Mecca Woods
Get Even More From Bustle — Sign Up For The Newsletter