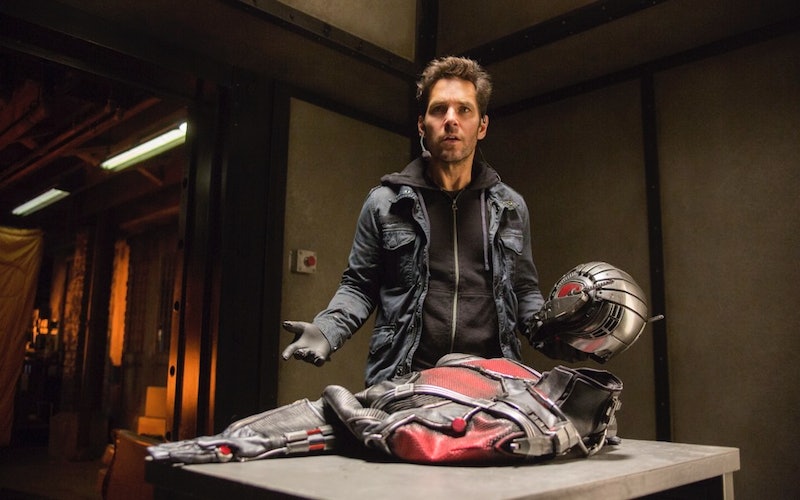 Captain America: Civil War is getting a lot of attention, and rightfully so, for being the biggest Marvel movie of all time. The film packs in a crazy amount of Avengers, including Captain America, Iron Man, Black Widow, Hawkeye, War Machine, Falcon, Vision, and Scarlet Witch. It also features the Winter Soldier, who now has his memory back, and introduces the new heroes Black Panther and Spider-Man. But one character who hasn't received much attention is Ant-Man. And that's a shame, because spoiler! Ant-Man gets big in Civil War , and it totally steals the show.

Ant-Man was the last Marvel movie released prior to Civil War , and though it did pretty well both at the box office and with critics, it wasn't considered one of the studio's absolute best or most groundbreaking films. Therefore, most people just kind of shrugged when they heard that the shrinking hero would be joining most of the rest of the Marvel stable in the movie, with some fans even assuming he was overkill. Boy, were they wrong. Paul Rudd's Scott Lang gets a number of the funniest bits in the film, which isn't too surprising, but what is kind of shocking is that he also has the best action sequence in the movie, bar none.

If you recall, at the end of Ant-Man, Falcon mentions to Captain America that he "knows a guy" who could help them in the fight against Iron Man. That plan comes to fruition in Civil War, when Ant-Man is brought onto Team Cap just in time for the fight. He hilariously gushes over Cap, and to a lesser extent, Scarlet Witch, before the fight ensues. He then shows what he can do in the battle, taking a page out of the comics and being launched on an arrow by Hawkeye and heading inside Iron Man's suit to wreak havoc (while also telling Tony Stark that he's his conscience). These are all great moments, and super fun, but his big moment is still to come. And I mean BIG moment.

Fans of Marvel Comics know that the Hank Pym version of Ant-Man didn't stay Ant-Man for very long, and spent much more time under his Giant-Man persona. As Giant-Man, Pym is able to use his Pym Particles to grow into a giant rather than shrink, and wouldn't you know it, that's exactly what Ant-Man does in Civil War. In the heat of the battle, Cap announces that he needs a big distraction. Ant-Man says that he has something big in mind, but he's only tried it once... in a lab... and he passed out. But he does it anyway, and the scales tip enormously in the favor of Team Cap once Ant-Man is standing around 100 feet tall.

He then wreaks havoc on Team Iron Man, hurling vehicles, kicking planes, swatting heroes out of the air like flies, and prompting Iron Man to sarcastically ask if anyone else is hiding secret fantastic abilities. It's the most fun moment in a very fun movie, and also completely surprising since no one knew that the MCU version of Ant-Man also had Giant-Man powers.