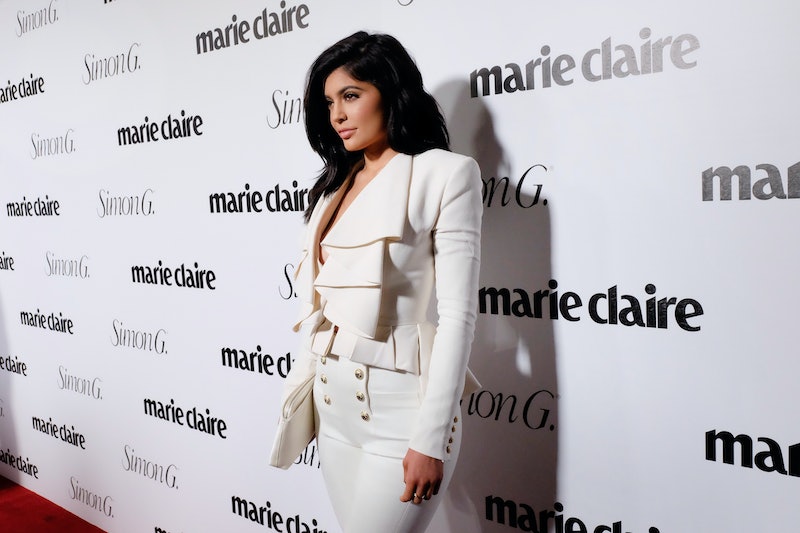 Say what you will about the Kardashian-Jenner klan, but those gals really know how to look amazing in photos. Whether it's one of their totally decadent family Christmas photos, a magazine cover photo, or just a mirror selfie for an Instagram post, the sisters really know how to catch the light just right or smize or whatever people do in order to take good pictures. And now, we can finally see at least one sister's technique. In a new video posted by Rob Kardashian, we can all finally see the process of Kylie Jenner taking a selfie, and trust me when I say it's like, literally on par with seeing Vincent Van Gogh at his easel, Stanley Kubrick behind the camera, or a Beethoven composing "Symphony No. 9."

Rob snapped the sneaky video while he and the fam (Caitlyn, Kylie, and Kendall) were having a fun little end-of-spring vacay in Malibu in April. He spent a lot of his time in the sun taking videos of him and his sisters having fun, which is nice to see after rumors of there being just a dash of bad blood between Rob and Kylie over his romantic relationship with Blac Chyna (who just so happens to be the mother to Kylie's boyfriend Tyga's son).

This video of Kylie taking selfies is so fascinating, though, becausewe are always technically seeing Kylie "working" — looking that hip and put together literally all the time, being filmed all the time, capturing the right photos, is a job — but we never see her in preparation. She is very rarely caught unawares, because all the sisters typically know when they are being captured by any sort of camera. Also, it's really interesting to see the dedication Kylie puts into her selfie game when even nobody is watching (or so she thinks).

I'm not going to go as far as to say being a Kardashian-Jenner isn't as easy as I thought, because they are still loaded pretty much for simply being — but what I will say is that I didn't really realize the level of artistry that comes with it. It's a Kardashian world and we're all just living in it, guys.