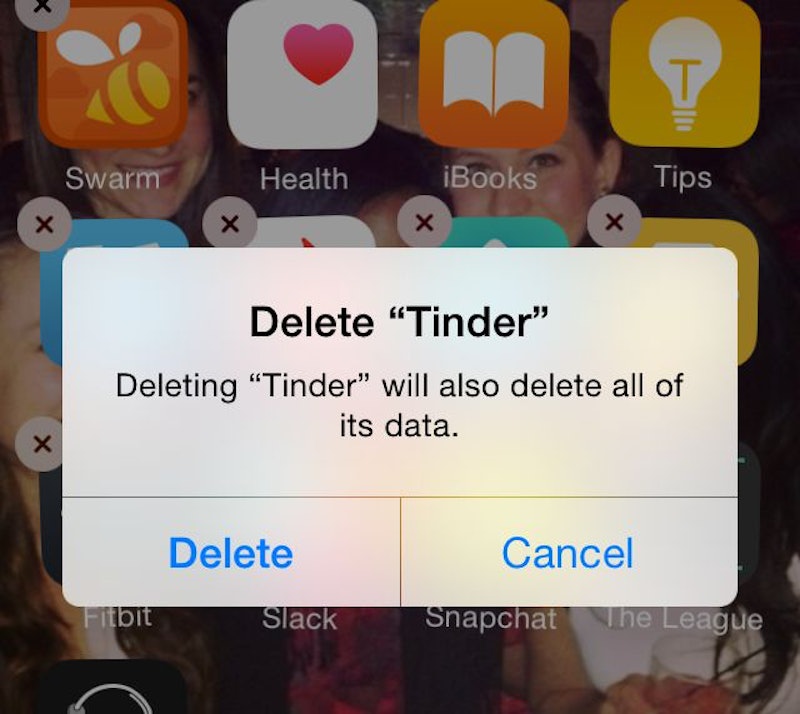 It was about a month ago that I decided it was finally time to kick the bucket and log off. There was such a surge of power—and frankly, relief—when I deleted all of my dating apps. Tinder was the first to go, followed by Hinge and then Bumble.

When I read Vanity Fair’s article, ‘Tinder and the Dawn of the ‘Dating Apocalypse’—I found myself nodding along mindlessly, silently saying ‘Yep, yep, yep.’ I didn’t really need the article to tell me that dating apps had changed relationships, marriages and the process of finding someone that you want to see for longer than it takes to swipe left or right. That, I knew, from four hard years of being single and watching the whole process change and in many ways, worsen. Even my mom taking over my Tinder account for a week confirmed this.

But as the article points out several times, as we all continue to get online to find someone we connect with offline, I had to beg the question to myself: “Why was I investing all this time into something that makes me miserable?”

Like any true addict, it took me a week to wean myself off of my dating IV and to get rid of the shakes that made me anxious: “If I’m not on these apps, how will I meet people?! What will I do?”

The answer, in short, is that I’m not really doing much of anything to meet anyone, and I’m not really going on that many dates, but I’m also much (much!) happier than I was watching notifications of a new match or message pop-up on my homescreen. In more ways than one, being an active participant in the app world did so many damaging things for my self-confidence, my views on love and even how I acted on those dates. Since taking a step back and removing myself from the ferris wheel of swiping for shits and giggles, here’s what I’ve learned:

I Don’t Need The Validation Anymore

In the Vanity Fair article, the author discussed just how easily it is to feel good about yourself. And it’s true—you see an attractive dude that you’d love to meet in real life and chat with, and suddenly, he matches with you—and bam! You think maybe (just maybe!) this will be something more than a split-second attraction. Ten minutes later when he tells you have ‘Nice tits’—and the mystery is gone.

While getting matched would sometimes make me feel pretty hot, it also could wreck my confidence when I went on the dates. Not only do folks never look as they appear, but when the date goes badly, I was quick to blame myself. “What’s wrong with me that I can’t meet someone great? And why do I keep attracting these awful people?” The truth is, it’s not me, and it’s not really even them. It’s how dating has changed—instant validation, followed by quick judgements and easy access to another option.

I’m More Open To Strike Up Conversations In Uncommon Places

Most of my parents’ friends and even my friends in their mid-30s who met their now-partners before internet and app dating became a thing, didn’t go digital to find love. Instead, they met randomly, through friends or at work. What I’ve noticed about getting offline is that I’m more open to striking up conversations with men in uncommon places—asking for help when I can’t reach the top shelf, smiling at the cute guy with the cute dog in the dog park, going to a bar by myself and engaging in conversation with whoever is nearby.

It’s a little out of my comfort zone since I’ve been so into the online game for so long, but it’s been an empowering way to be uncomfortable. Here I thought I lost my knack for flirting, and really, I was just hiding behind my own thumbs. I haven’t met the love of my life or anything—but the people I’ve met have been better quality, and if nothing else, I’m smiling more.

To be fair, I’ve never used apps to have a one-night stand. To me, there’s something grimy about matching with someone and going to their apartment 10 minutes later to bang. Whatever floats your boat, sure, but if I really want to have an orgasm tonight, I’m sure I could find a way without logging online. The thing is, for decades, we’ve all found ways to have casual sex if we wanted to have it, and while apps make it a bit easier to match with like-minded people, it takes away some of the grit and passion of the whole act to discuss sex via text. The encounters I’ve had that have been the hottest with strangers involved sexy conversations in person, some booze, plenty of lead-up, and finally, a great ending. Are we making everything too easy— and disposable—including things that are meant to be seductive?

I'm More At Peace About Being Single

Online dating has always felt a lot like online shopping, just as Vanity Fair noted. And while it was fun in the beginning and I actually met quality people, the longer I was online, the more superficial, flippant and demeaning it became. I not only felt like an option instead of a priority, but I knew I was. Each time I’d stand up to head to the restroom on a date, I knew my date could easily whip out his phone and have another lady waiting within an hour. I also knew when they were very adamant about having sex that night, and if I wasn’t into it, that would be the end of the whole meet-and-greet. But even though the apps made me annoyed and less than stellar about myself, I kept them going for years. Why? Because as long as I was on these apps, I was dating. I was ‘putting myself out there.’ I was making an effort to not live alone forever and ever.

Without them, I feel less pressure. I don’t have anything to respond to or to look into or a date to think about. Instead, I’m letting whatever will come, come. Because even when I was active on those apps and going on multiple dates, I wasn’t happy about it. I didn’t look forward to them. I didn’t want to log on and have the same conversation over and over again. Being bold enough to let ‘em go so I could feel more at ease has made me not only more relaxed and at peace about being single, but it’s made me a better date. The men I go out with I’m actually interested in because I met them offline. I met them in real situations and had genuine conversations.

I might not meet my future boyfriend simply by taking a stance against Tinder. But I’ll tell ya one thing—I’m not concerned. Because when I do meet him, I don’t want to be annoyed that he wasn’t as tall as he said he was or he was trying to sleep with me in 10 minutes or that his smile wasn’t the same in person. I won’t have to worry about those things because I’ll know what I’m getting right from the start.

And hopefully, he’ll be smart enough to get off of those time (and heart) wasting apps to be brave enough to ask if he can buy me a drink.

More like this
How Does The Hinge Algorithm Work? An Insider Explains
By Lexi Inks
14 Underrated Date Ideas To Try With Your Partner
By Lexi Inks
Bumble's "Compliments" Feature Lets You Message Before You Match
By Lexi Inks
This AI Filter Shows How You’d Look In Different Time Periods
By Alexis Morillo
Get Even More From Bustle — Sign Up For The Newsletter