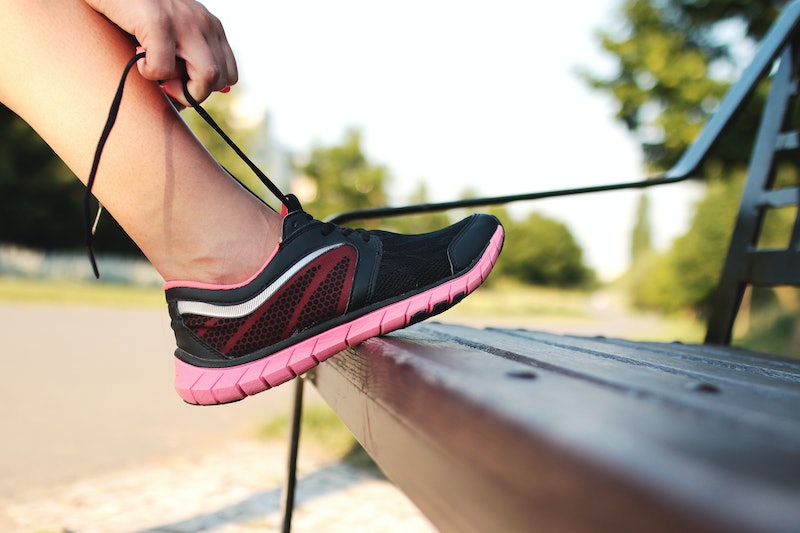 On Sunday, a 12-year-old girl headed to the Rochester Regional Health Flower City Challenge in New York prepared to run the 5K that she had been training for. She arrived and saw people already lining up, so she quickly joined the crowd. There was just one thing: LeeAdianez Rodriguez had accidentally joined a half-marathon instead of the 5K she intended to run. No big deal, right? A half-marathon is just... uh, never mind — it's definitely a big deal, because a half-marathon is an extra 10 miles. She was about halfway through the race when she realized her boo-boo, but according to the Democrat & Chronicle, she decided to keep going and finish it anyway.

Not only did Rodriguez — one of the youngest people to compete — finish, but she even walked away with a medal and one heck of a time: 2:43:31. For 13.1 miles! I walk from the car to the apartment and I need a nap. If I had been in Rodriguez's running shoes, the moment I realized my mistake, I would've hailed a cab and headed for Chipotle. Rodriguez, on the other hand, has definitely earned the right to celebrate. Here she is with her hard-won medal:

That is definitely what we call "winning."

And suddenly, my pre-teen years don't seem so fabulous. I was no rebel growing up, but I certainly wasn't running half-marathons, either. I do have my own unique running story, however. While Rodriguez is busy being a total badass, here's what I was doing when I was 12.

1. Getting Lost On The Cross Country Course

I have the very distinct, humiliating memory of joining my school's cross country team, despite being a terrible runner. During one meet, I inadvertently veered off-course with a teammate. My mom and coach found us an hour later. He was still keeping our time.

2. Pretending I Didn't Have A Period Because Society Told Me "Periods Are Gross"

I actually wore sweaters that went down to my mid-thighs because I needed to shield my hideous menstrual ways as much as possible. So much stigma. So much.

For the first three seasons of Fresh Prince of Bel-Air, Janet Hubert played Aunt Viv. Then, in 1993, Daphne Maxwell Reid took over. Rumors of cast feuding have swirled since, but the question still lingers: Who was my favorite Aunt Viv?

You could take the occasional lick, but for the most part, they were purely ornamental.

5. Getting Cootie Shots From My Girlfriends To Keep The Nasty Boys At Bay

Did anyone else do this? "Circle, circle, dot, dot, now you have a cootie shot." They'd draw it on your hand with their fingers to protect you from stinky boys.

6. Determining Which Cute Boys To Include In My Cootie Catcher

I had a new crush every week, so this was a challenging task.

7. Attempting To Sneak Into All The Grown-Up Movies

I was aiming for Scream 3, Erin Brockovich, and What Lies Beneath, but Mom would only allow Center Stage and The Flintstones in Viva Rock Vegas. Lame-o.

If memory serves, this was just after Justin Timberlake's ramen noodle hair phase. How brilliant was that video? And the special effects!

9. Pretending I Knew The Lyrics To All Of Eminem's Songs

I could pick up a few words here and there, but it usually ended up coming out as, "It's funny, 'cause at the rate I'm going when I'm 30, I'll be the only person in the nursing home flirting... Blah, blah, blippidy bloo.... 'Cause I'm Slim Shady, yes I'm the real Shady..."

10. Expanding My Collection Of Peasant Tops

Because no wardrobe was complete without them.

More like this
8 TikTok Pasta Recipes To Try Out At Home
By Emma Garza
TikTok’s “5-9 Routine” Trend Is Here To Boost Your Productivity
By Courtney Young
What Is "The Ick?" The TikTok Dating Term, Explained
By Courtney Young
18 Games Like Wordle To Play Online
By Kaitlyn Wylde and Emma Carey
Get Even More From Bustle — Sign Up For The Newsletter