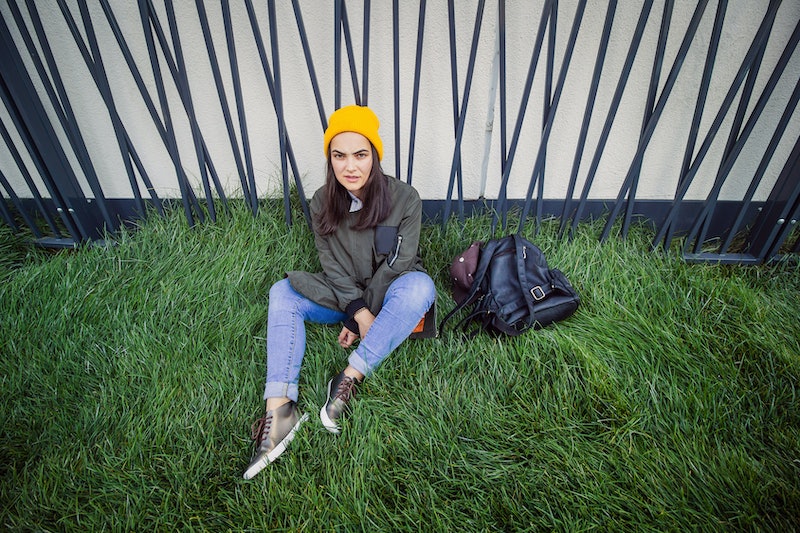 Who else besides me was an emotional ball of hormones as a teenager? Everyone? Cool. We all had our own ways of expressing our teen angst in the early 2000s, largely thanks to some of the greatest music and fashion we've ever experienced. It wasn't enough to simply be angsty. Everyone needed to know you were angsty. And even when you defiantly claimed that you wanted to be left alone, you needed everyone else to know that you wanted to be left alone because your life was so hard and nobody ever understood you. Just like some of our favorite things in the '90s — toys, clothes, jewelry — everything we bought, wore, and listened to as teenagers was about self-expression. It was about being pissed off and emotional, and making sure everyone knew you were pissed off and emotional.

Expressing my out-of-control teenage feelings was hilarious for me because I was a total goodie-two-shoes, an over-achiever, and a major teacher's pet. Then I'd go home and start crying because my pants were wrinkled or someone looked at me funny or my left eye was bigger than the right. I'd run up to my room, slam the door shut, and do one of these things. Or all of them. You know how it goes.

Some of Morissette's best angry songs from the '90s bled well into the 2000s. Nothing provided a release for your angsty teenage mood swings quite like screaming the lyrics to "You Oughta Know" and "Ironic" while thinking of the crush that never asked you out. In other words, every guy I ever liked.

2. Hang Evanescence Posters All Over My Room

Amy Lee was like the gothic alter ego we all dreamed of having. She was the hot bad girl in a skirt and corset, and having her posters plastered to your walls was a great outlet for all of your melodramatic teen years.

3. Did Hot Topic Just Barf In My Closet?

Hot Topic was similar to Evanescence in the sense that it made you look deep and hardcore even though it was relatively PG. When you were feeling particularly emotional, you'd whip out the black studded choker, fake nose ring, and Metallica t-shirt, even though you had never listened to a Metallica song in your life.

4. Decorate My Locker With All Of My Favorite Hunks

Some girls taped pictures of Britney Spears and Christina Aguilera in their lockers. I had James Van Der Beek, Shane West, and Chad Michael Murray. They were so cute, and... just so sensitive to my feelings.

5. Write Embarrassing Poetry In My Diary

GUILTY! I totally did this, and despite the fact that I now make a living off my writing, I can't write a line of poetry to save my life. Why did I feel the need to rhyme everything? I'm in love. It's like a dove. From above. Glove.

6. Create Elaborate "Keep Out" Signs For My Door

Privacy was of the utmost importance during our teenage years. I didn't want anyone to come close to barging in my room while I was writing my next award-winning poem. My "Keep Out" signs rotated monthly. Sometimes they were sweet, with flowers and butterfly stickers. Other times they contained death threats.

7. Paint On The Black Eyeliner A Little Thicker Than Normal

Girls talked about that chick in school who wore heavy black eyeliner. She was... edgy. Dangerous. Moody. +10 brownie points if you waited to apply the makeup until you got to school because your parents wouldn't let you. What a rebel.