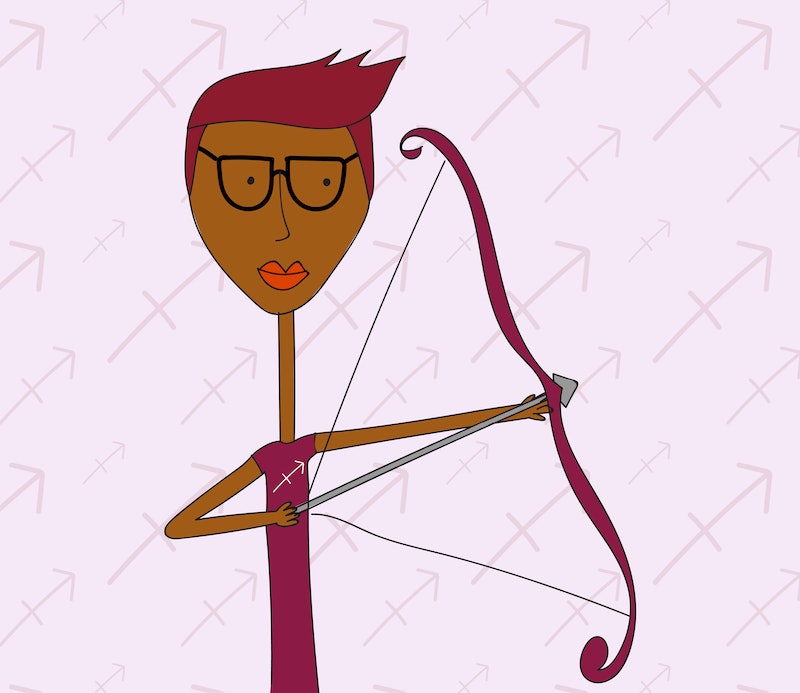 If you're a Sagittarius, you probably already know the defining characteristic of your sign: You're an idealist. You love change and travel, and you're always up for an adventure. You bring optimism and smiles to everything that you do. Your sense of humor makes you enticing to friends and lovers alike, and you're prone to seeking out adventure in the outdoors when you get the chance. The not-so-nice traits typically associated with your sign, Sagittarius, suggest that you may promise more than you can deliver, and that you can become impatient on your path to getting what you want.

So, what does all that mean for Sagittarius during retrograde? To sum it up, Sagittarius, you're going to have to slow down. I know that's probably not what you want to hear, because you like to live life surging forward and hoping for the best — but hey, that's more time for honest reflection and investigation of your feelings and motives. That's never a bad thing.

Typically, Sagittarius, you are not one to linger on the details and finer points of things. You like to get the big picture and get moving. However, with Jupiter turned retrograde, it's imperative that you work through all of the details of your plans and promises to make sure things don't fall apart. Remember how you sometimes find yourself promising more than you actually pull together? Be very weary of this happening while Jupiter is retrograde, Sagittarius, because big promises mean more chances for the details to slip out from under you. Jupiter has been retograde since January and will be there until May 9.

Saturn turned retrograde during the month of April, which means that you need to persevere and work hard to achieve your goals. Seriously: It's OK (and awesome!) to have big dreams, Sagittarius, but Saturn retrograde means you need to actually push through and see your projects to the end to make things come together. You're an idealist and an optimist, but don't let that "hope for the best" attitude translate too heavily into your goals this month. In fact, Saturn's retrograde started on March 25, so it's highly possible you're already feeling its impact on your daily life. Watch out, because the planet stays retrograde until Aug. 13.

When Mars turns retrograde, it's there for a long time — from April 17 until June 29, in fact. What does this mean for you, Sagittarius? A retrograde Mars means that you may experience more obstacles and defeats than you normally do, but it doesn't have to be that way; it's also an opportunity for you to channel more patience, determination, and caution. If you're a Sagittarius, you're likely a star in a certain area (say, in sports, art, in the office, etc.), which is great — but Mars retrograde may mean you face additional obstacles in this area of success. This doesn't mean quit, though! It means slow down and push through.

Pluto (which I know is no longer a planet, but hey, bear with me) turns retrograde starting April 18 and continues until Sept. 26. Because Pluto is going retrograde under the Capricorn moon, dear Sagittarius, this means it may be time to rethink your finances. And by rethink, I mean budget and look at long-term expenses, including what you may owe people. Pluto retrograde may mean it's time for you to pay past debts or that an unexpected expense will arise. The Capricorn sign is known for being fastidious when it comes to finances, Sagittarius, an area where sometimes your care-free attitude doesn't help you much. When Pluto is retrograde, it's a great idea to sit back and carefully plan out your money situation.

Mercury is the planet known for controlling communications. For you, Sagittarius, talking with others is usually pretty easy; you're social and outgoing, and because you tend to make promises, you generally get in good with others pretty quickly. Of course, if you don't always follow through on those promises, you run the risk of hurting and confusing others. With Mercury being retrograde from April 28 to May 22, it's especially important you think carefully about what you tell others and how you come across. It's likely you'll still be your usual smiles and butterflies, Sagittarius, but it's especially important now that you don't fall victim into making too many promises.