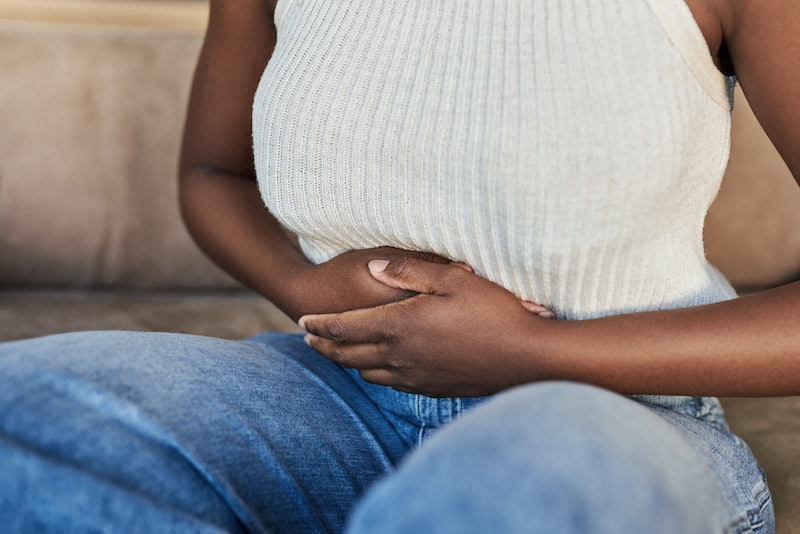 If you're someone who gets a period, you already know how brutal menstrual cramps can feel. Menstrual cramps vary from person to person, and can range from mildly uncomfortable to debilitating, but pretty much no one enjoys having them. But how have we dealt with menstrual cramps over time? What weird treatments for menstrual cramps from history can we look back on and cringe at, laugh at, or maybe both? In the modern day, most people take a combination of medication, heating pads, and plenty of rest to ease their way through cramps (and, if we're being honest, some ice cream and a back rub doesn't hurt, either). Still, people have (obviously) been menstruating since humans became a thing, so I have to wonder: How would I have treated my menstrual cramps way back when?

It's also important to point out, in my opinion, that while menstrual cramps (and menstruation in general) is something we typically only discuss in terms of women's health, it's also important to remember that they affect people who do not necessarily identify as women, too — genderqueer people, non-binary people, transgender men, and many others may also get periods. While women's health is a huge and super serious issue today, to refer to things like menstruation as only a women's health issue does a great disservice to every other person on the planet who might be dealing with them, too. Exclusion never helped anybody.

So, what are some of the weirder ways we've treated menstrual cramps over time? I collected the six which stood out to me the most below, for all of my fellow history nerds. One thing's for sure: Humans certainly are a... creative bunch.

During the Victorian period, some doctors responded to complaints of menstrual cramps by opting to remove the ovaries entirely. Now, this obviously wasn't something doctors did all the time, but many surgeons recognized that when people were fainting, vomiting, and convulsing during their menstrual cycles, leading them to think surgically removing the ovaries was the ultimate (although also the most intense) solution. Uh... yikes.

These two picks are sister herbs you can frequently find in the southern part of the United States. They basically act as natural muscle relaxants, making them a popular choice for people who were experiencing severe menstrual cramps. These herbs act to lower the rate of uterine spasms and lower the overall degree of pain felt. This herbal treatment was pretty local just to the southern United States before scientific studies began covering it in the 21st century when it spread overseas to the UK.

Ah, tea. Many of us already love drinking tea on our periods because the warm liquid can have a nice, calming effect on our bodies and our minds. Ginger tea in particular has been popular as a way of easing menstrual cramps. Ginger is effective at relieving pain and tension in general, as well as easing an upset stomach, so it's a doubly whammy when it comes to easing menstrual cramps. This method has been around so long it's difficult to discover who first recognized it, but it's a relatively weird method that's actually become pretty popular and has stayed that way.

Dating back to Ancient China, acupuncture has been a popular approach to treating menstrual cramps. In fact, research on the effectiveness of acupuncture to treat period cramps shows that there are very particular places on the body you can work with in order to alleviate cramps. While I've never tried this myself, supposedly you can find one area by lightly pressing your fingers just above your ankle bone, on the inside of your leg. If you're suffering from painful menstrual cramps, the spot feel very tender to touch. If so, lightly hold down on the spot for five to 10 minutes and — according to acupuncture — you should feel your menstrual cramps diminish. Pretty cool, right?

No, really. If you lived in Medieval Europe, you'd find the common medical advice of the time was to locate a toad, burn it in a pot, and put the ashes in a pouch. Where would you put this pouch? You'd strap it close to your vagina and hope for the best. The logic here was that the offending toad would help "flush" your body of impurities (in this case, menstrual blood) and therein alleviate your cramps. This is one method I won't be trying.